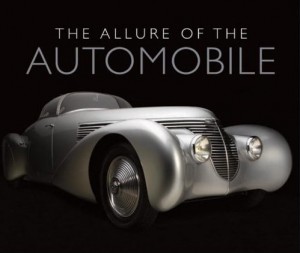 In 2010 the High Museum of Art in Atlanta staged a three-month exhibit of 18 cars it felt best illustrated the theme of “driving in style.” A book of the same title as the show was produced to accompany it. To call this book a “catalog” of the museum exhibit seems inadequate: it is a proper stand-alone book, with a topic and a purpose entirely independent of the museum show—except that the exhibit’s goals, and consequently the book’s contents, have a specific didactic purpose: see the quote above from the Foreword penned by the High’s director, Michael Shapiro.

Before putting the book under the microscope it should be said first of all that it is a fine book, features Peter Harholdt’s excellent photos, and costs a mere pittance (thanks, surely, to the deep pockets of lead sponsor Porsche Cars North America, Inc.).

“Visitors may be surprised to find that today’s ubiquitous car descends from such a rich heritage of superlative design and technical innovation.”

It is also very satisfyingly presented, with appropriate paper and just the right weight of cover boards which even sport a debossed title on the front. The clean page design—the High’s staff designer Angela Jaeger’s first car-themed publication—looks deceptively simple but if you have ever done page layout you’ll recognize a sure hand and intelligent choices.

While the photos alone are reason enough to own this book, the above matters of “theme” and “audience” beg to be probed. A museum exhibit is by definition self-limiting. Unlike a classic-car show or a private collection, or even a multi-faceted classic-car book, a museum exhibit aims to make, or rather must have a point. To that end it is a rigorously “edited”—curated—intellectual exercise: to guide the viewer, by presenting specific examples, to a particular outcome/conclusion/result/point of view. This is an unavoidably complicated way of saying that what’s in a show is as intentional as what’s not. The well-informed automobile enthusiast should bear in mind that the target audience for the exhibit is not the hard-core car geek but the general art museum visitor. The former will look at the 18 specimens in this book and grumble that there is nothing new under the sun and the latter will be delirious with excitement over all the eye candy. The cars selected for this show are delectable and exotic, but they have also been seen a million times before.

As is true of every kind of selection, the question of whether these 18 models are the most representative of the show’s theme is fertile ground for violent disagreement. In this reviewer’s opinion they are absolutely not, nor do they represent a compelling intellectual arc or progression or inevitability. But, the show is what the show is, and none of the foregoing should get in the way of looking at the book as a book. The High is of course not the first museum to explore the theme of automobile as artistic expression. New York’s MoMA, back in 1951, was the first fine art museum in the US to do it. The High (founded 1905), incidentally, is the leading art museum in the southeastern United States and has over 12,000 works of art in its permanent collection.

Six pages are devoted to each of the 18 cars. Half or more of them are photos, of which several take up the full 12” landscape page. The text is ably written by automotive historian/journalist and former director of the Petersen Automotive Museum in Los Angeles, Ken Gross. He discusses the marque in general and the specific car or model shown in particular, then gives pertinent details about the designer, the build, the customer, or the technology. The photos themselves are not captioned but the text is usually specific enough to direct the eye to noteworthy details in the photos. It is absolutely not a shortcoming of the writer/the writing that this exposition does not advance the aforementioned theme of the show. It is as if the exhibit and the book are on separate trajectories—except that, see first paragraph, the book is limited by what the curator included in the show. Which opens a can of worms . . .

We have already remarked upon the futility of arguing about inclusion and exclusion. The High’s curator of decorative arts and design was Ronald T. Labaco (now in NY), who claims co-author credit. He surely labored over the Introduction he wrote for this book. In broad strokes, and to the non-specialist reader, it reads perfectly plausible. His key message is that it is custom-designed bespoke coachwork that elevates the car to “art.” But, it would be a sin of omission for the reviewer not to remark that when a subject-area expert writes about a different area of expertise, certain nuances are likely to be missed. While all the talking points are there, some of the dots on the intellectual landscape are connected in ways that simply do not pass muster. This is not the place to write a 50,000-word critique of all the micro details so let us consider instead ONE example that must be obvious to anyone with an attention span and requires no ability other than the power of observation: a key point in Labaco’s analysis of the demise of coachbuilding is the debilitating economic impact of the Great Depression. Yet, EVERY car shown in this book is later than 1933. Ergo, these dots do not connect. (Instead consider WW II, craftspeople [and also customers] dead, industries and infrastructure destroyed, postwar raw material bottlenecks and monetary/export/taxation/tariff issues. Overlay the historic timeline with data points from order books for bespoke coachwork and ponder the convergence.)

It is also regrettable—in a book in which only 7 of the 18 cars are American—that Labaco is so obviously looking at the world from a myopic American perspective. Consider: He writes, “It was the ubiquity of these simple, straightforward motorcars [i.e. Ford’s Model T and A] across the United States and throughout western Europe that helped to usher in the era of the stylish automotive coachbuilder.” Gibberish! The German industrialist of the 1920s, the British playboy, the Spanish grandee—or the Siamese prince or the Russian aristocrat—didn’t waste one iota of grey matter on Ole Henry’s boxy cars!

You see the problems. Let’s return to the photos. Harholdt racked up 12,000 miles trailering his magic 30-foot custom mobile studio all over the country. (In other words, the cars are not photographed at the High. Not that the book would tell you this . . .) As is his wont, and being a museum photographer, he shoots against a uniform, usually black background so as to let the shapes make their own impact, uncluttered by peripheral noise. Impeccably lit. Study the shots that include different surfaces—car interiors: mohair against wood, bakelite next to chrome. Consider the reflectivity. Consider that each surface is captured with its distinct properties. And weep, because you can’t do it that well! If you have not yet seen his work elsewhere consider it your loss. His set-up photos are augmented by one or two period shots of each car.

If you have the book, look at the 15 cars on the back cover. Harholdt shot only those; i.e. the 1938/39 Porsche Type 64 body shell, 1954 Dodge Firearrow III, and 1955 Mercedes-Benz 300SLR “Uhlenhaut” coupe photos are not his but were provided by the manufacturer or auction house. (While photo credits are listed in the back, a reader would have to be observant enough to notice that certain photos look noticeably different and then hunt down the credit.) A Glossary and an extensive Bibliography are followed by a list of lenders and a good Index.

So, once more, with gusto: lots of book, little money, skip the intro.

The show is slated to open at the Portland, Oregon Art Museum in June 2011. It will substitute four cars and have its own catalog/book.

Monocoques and Ground Effects »
« Lost Hot Rods: Remarkable Stories of How They Were Found