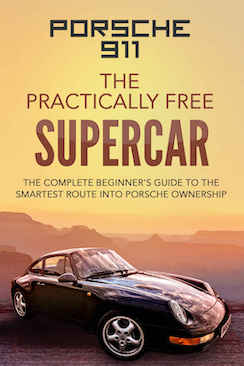 Buying a Porsche can seem a bit daunting to some people. In truth, it can be a potential minefield, so my main goal with this book is to help the average person (like me) who is considering buying their first Porsche. I will briefly guide you through the model range and discuss how you can afford to buy and run these amazing machines cheaply. I will show you how to maximize your chances of making your Porsche experience practically free motoring. I will also share useful locating, buying, running and selling tips as well as giving you detailed accounts of my real-world Porsche ownership experiences including costs up to and including my current 911 type 993.

Amazon has sixteen pages of books about Porsche and you have to wonder whether there really is room for yet another one about one of the few cars that really does merit the status of “icon.” Surely the polymathic Karl Ludvigsen’s Porsche – Excellence was Expected must say it all in its latest edition, which runs to four volumes and 2800 pages?

So, is there a niche in the Porsche lexicon for a 160-page, self-published book written by a Scottish guy you’ve probably never heard of? Maybe there is, because Porsche 911 – the Practically Free Supercar almost tempted even me into gazing down what I suspect could turn out to be a long and slippery slope. At the foot of the slope would be a brave new world where this lifelong Lotus devotee has renounced his faith and converted to the gospel according to Saint Ferdinand of Stuttgart, sound-tracked by a choir of flat sixes. And even though I am a 911 agnostic, if you dare to suggest it isn’t the greatest sports car ever made I will treat you to a monolog extolling its longevity and popularity. Then I’ll remind you of how 911 derivations have won everything from Le Mans to the Monte Carlo Rally, from the Paris-Dakar to the Targa Florio and finally I’ll tell you that the shape of the 1963 original has stood the test of time so much better than any E-Type Jaguar.

And, if my oratory doesn’t persuade you, I may have to ask you to step outside.

But here’s the thing—I have always felt that owning a 911 wasn’t something people like me did, or even could dream of doing. Because a new one is too expensive and, although a ten-year old 911 is affordable (I just spent a half hour doing my research on this), wouldn’t the running costs be ruinous? Hadn’t I heard that some of these allegedly “hewn from granite” sports cars even developed a reputation for lunching their engines when the Intermediate Shaft Bearing gave up? They had indeed, but Robert McGowan—damn him—has persuaded me it’s a glitch that can be fixed, not the end of the affair, that people like me really can own a 911 and that the only tears which will be shed are tears of joy—or should that be Freudentraenen? 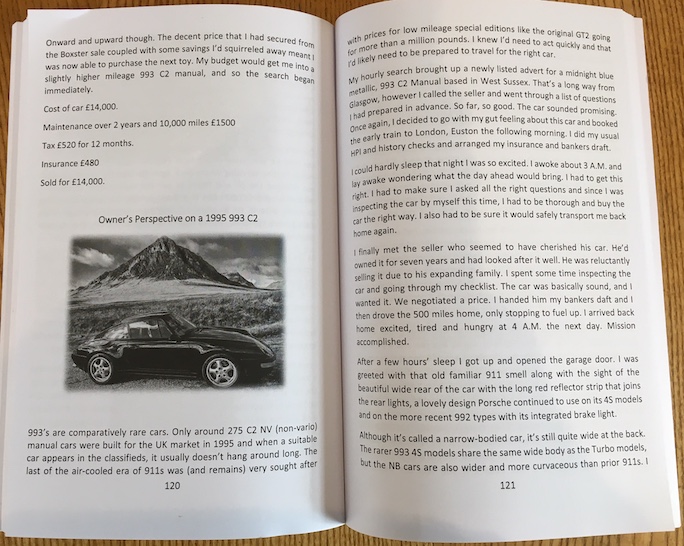 The author comes from a working-class Glasgow family that didn’t own a car of any description, and he traces his 911 fixation back to the time the family passed an Official Porsche Centre whilst enjoying an evening walk in the suburbs. “‘Do you like that car [a red Carrera Targa Sport] Robert?’ my mum asked. ‘Oh, aye!’ I said. ‘You’ll buy one when you’re older, son.’” And he did too, buying his first in 2007 and currently driving a 993 (the 911 made between 1994 and 1998). In his book McGowan combines his own experience of Porsche ownership with practical advice, likely running costs, and some historical background of the marque. I will return to this shortly but it is the latter element of the book that is a poor fit.

McGowan writes in a fluid, almost conversational style and, whilst his prose may have one cliche too many for some, I enjoyed his unpretentious enthusiasm and the very obvious pleasure he takes in being a Porsche owner. The fact that the book is self-published means I can tolerate more typos and solecisms than would otherwise have been the case but the book would benefit from some rigorous sub-editing. The endearing style makes up for a lot though, and it is clear that the author writes from the perspective of someone whose well of knowledge is complemented by an almost Tigger-ish enthusiasm. Such as this: “Don’t delay. There are no pockets in shrouds. Life could change in an instant … Live for right now and buy the Porsche you truly desire.” That sounds like a good mantra to me. 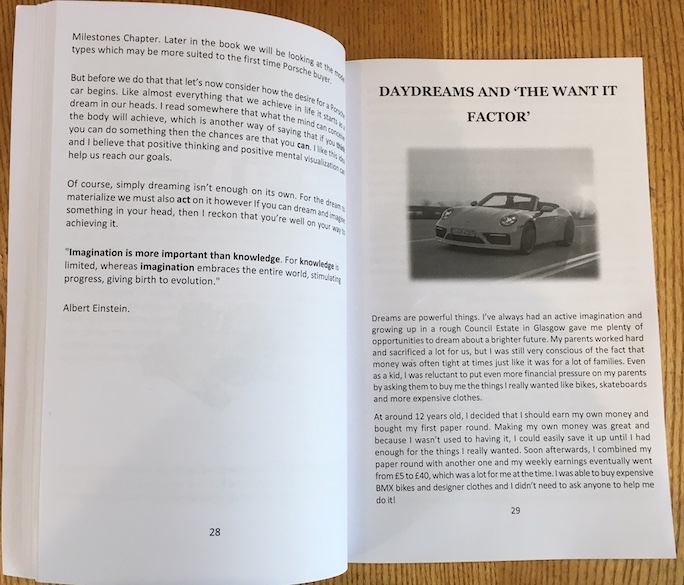 This is a short book (too short to live up to the “complete beginner’s guide” subtitle) and too much text is wasted in trying to give a potted history of the marque. For example, thirty pages (nearly 20% of the book) are year by year, two- or three-sentence milestones, such as this, for the year 2000:   “Construction begins on a new Porsche assembly plant for the multi-purpose Cayenne SUV in Leipzig.” In a book nominally about the 911 the reader’s reaction may well echo my “so what??” But I am less troubled by the fact that some of the text is about the author’s ownership of a Boxster because, with the Cayman, it’s as close to a 911 as makes no difference. Or at least it was until 2016, when Porsche dropped a flatulent-sounding flat four in the 718’s engine room.

These cavils apart, this is a book that might help you make up your mind to buy a 911. Its technical content is much lighter than some rival works but you may want to buy this book for the reassurance that Porsche ownership is rational and sensible—for anyone who puts their mind to it. Or you will buy it to confirm that you have made the decision on entirely rational grounds, and not just because you’ve spent the last three months fantasizing about heel and toeing your way along your favorite road and making that bloody noise.

This book is of course not the only one you should buy if you dream of owning a 911, it isn’t the first word on Porsche ownership and it sure isn’t the last. It’s a brief word too, but for all that, it is a pretty good word.