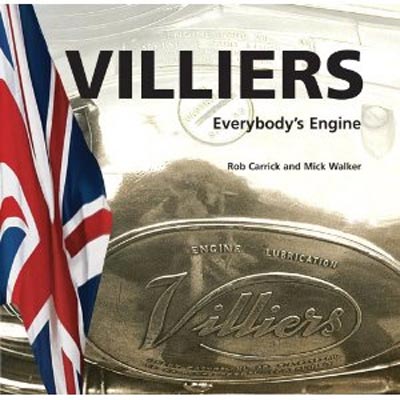 by Rob Carrick and Mick Walker

Villiers may have started building “everybody’s” engine way back in 1912 but unless you’re from the two-stroke small-engine world, chances are you do not know them. In which case you would do well to start with a look at Appendix 5 “Industrial Power Unit Users”. You’ll probably be surprised at the variety of applications—from track layers to potato sorters. (Motorcycle folks may want to check out Appendix 3 “Motorcycle Power Unit Users”.)

If the Villiers name does sound familiar, perhaps it is because of fabled engineer Charles Amherst Villiers (1900–1991).

But the two have nothing in common—not even the pronunciation of their name—except that the Villiers Engineering Company, in Wolverhampton, is located on and named after Villiers Street which in turn is named after Britain’s longest-ever serving Member of Parliament and Amherst’s great-uncle, Charles Pelham Villiers. He had died in 1898, the same year the Sunbeam bicycle company opened a new factory—on Villiers Street—to start manufacturing their own pedals under the name Villiers Cycle Component Company.

Authors Carrick, a Villiers expert, and Walker, who at last count has 115 books to his name, have collaborated before on motorcycle topics. Villiers engines have of course been written about before but mainly in the context of various marque histories. This is the first book solely devoted to their history. Most were utilitarian, a few were used in sporting and even competition machinery, and some in lightweight three-wheeler cars and karts. Of the cars, only the Bond Minicar and Invacar (one could count the Penguin ATV) are covered here but there were also AC, Argson, Frisky, Harper, Scootacar, and Xtra. As the book contains neither Foreword nor Introduction it is anyone’s guess what the authors’ guiding principles or intentions were in mentioning some but not all. It is understandable, however, given the book’s focus on engines, that non-engine products such as Villiers stoves are not mentioned although the reader with an interest in industrial history would probably have found a reference to their existence useful. On the motorcycle front the book leaves no stone unturned; most of the text and photos (none of which are credited) are devoted to them. Some of the photos are of restored machinery and there are quite a few detail shots and engine drawings. Closing chapters cover the industrial engines as well as modern-day vintage motorcycling events. This section also covers the present-day spares situation, notes about serviceability and providers, and a list of service publications.

An abundance of period illustrations, especially the ads, give a good impression of just how large a role this firm played in the early motorization of Britain and beyond. And while the book does reproduce countless examples of brochures and ads, and even an entire early company brochure, many are so small as to be barely legible and are often uncaptioned. It is a missed opportunity to have treated them as nothing more than decoration.

Speaking of decoration, the book is very nicely presented and creatively laid out. But if the purpose of design is to communicate, the book is lacking in clarity. For example, except for the chapter openers it uses one single style of head throughout; there are no subheads. Without fail this economy of styles results in confusion, such as when “AMC” is followed by “Piatti” and then “Alpha” and the reader has no way of discerning which topic is subordinate to which, or, if they aren’t, why they are listed in this seemingly random order. Coupled with a painfully brief table of contents and the lack of running heads or feet, the book’s plentiful content is hard to unlock.

In addition to the two Appendices already mentioned, three others cover engine classifications and identification. The Index lists people and product.

The book clearly has its place but the researcher/scholar who hoped to find here a methodically presented definitive account, in a one-stop go-to book will find it wanting. Then again, maybe this isn’t what the authors had in mind and so one cannot fault them for not achieving what they didn’t set out to do.

The Corvette in the Barn: More Great Stories of Automotive Archaeology »
« Spitfire Manual  1940