More From The Hidden World of Prototypes, One-Offs and Cancelled Cars 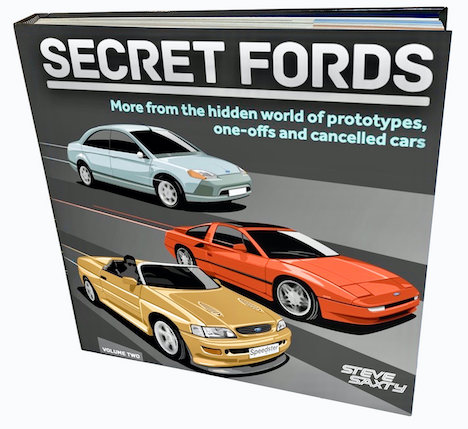 “I can’t think of a moment when someone didn’t rush to help what might have seemed like a slightly daft request. My base premise was: ‘I’d like you to tell me the story of how Ford designed its cars, through all the secrets along the way.’ Everyone seized on the idea as something special; and I hope the result, spanning Secret Fords vol. 1 and now vol. 2, provides a unique record of a golden era in car design.

Almost every day of research left me incredulous at what I learned. I’m assuming you’ve been just as surprised and have been shaking your head in wonder too.”

If you pull up next to a Ford at a stoplight . . . and don’t give that Fiesta-Escort-Mondeo-Scorpio-KA-Puma-Focus a second thought/look, this book has much to tell you, and not just about Fords.

Conversely, if you have the blue oval tattooed on your chest, can you name any of the cars on the cover? No? Don’t feel bad—they’re secret. Or were secret. 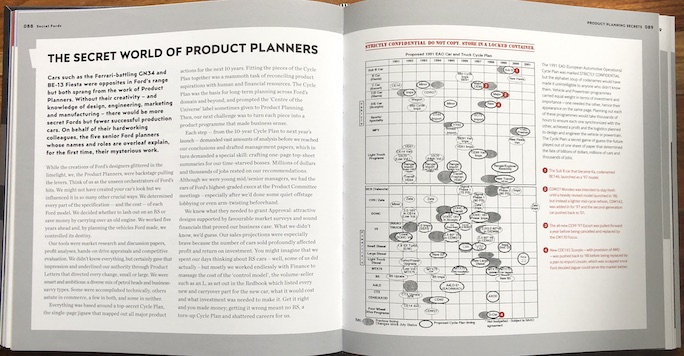 If you don’t already know what Product Planning is all about, here are answers. Note the classification of the memo on the right: Strictly Confidential. Do Not Copy. Store in A Locked Container.

That excerpt above is from the epilogue to this book, and, yes, you will be shaking your head in wonder. There’s pretty much not a single page in the book that won’t make even car geeks think they must have been in a coma: how could so much have been going on for such a long time and been kept so quiet?? 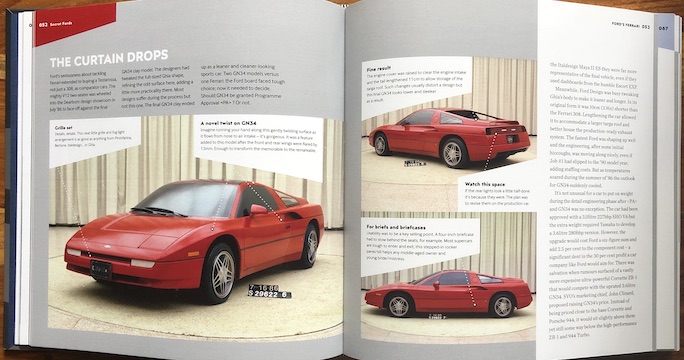 This is the middle car on the front cover—a Ferrari 308-beater at Porsche 944/Corvette prices. And in clinics of owners of those very cars, the consensus was that Ford Project GN34 looked the part and had the goods and should be priced accordingly! Ford did not build it. Sigh. Those funny-shaped boxes on the photos highlight design features; unless you know to look with a designer’s eye those tidbits may well have escaped your notice. 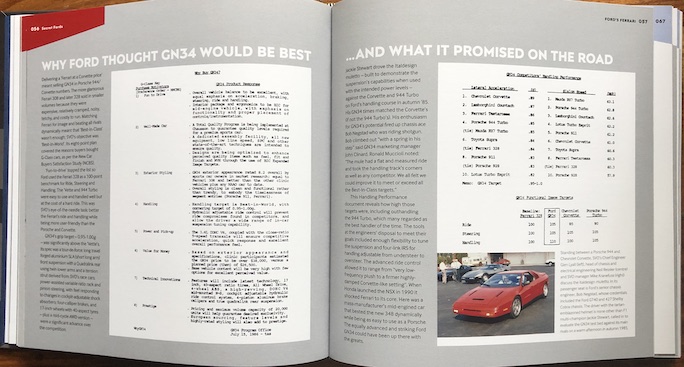 And things may well have remained quiet if it were not for author Steve Saxty being a well-connected Ford insider. That he professes surprise at his findings is a surprise itself. After all, he was in the right department, product planning, but the timeframe he puts under the magnifying glass exceeds his tenure. Also, it just goes to show how intentionally compartmentalized the work on hush-hush need-to-know projects is.

The excerpt above also alludes to a volume 1 (1970s–mid ’80s, amounting to easily a hundred cars you never knew existed), which we have not [yet] reviewed, so just to get it out of the way, both volumes cover mainly European Fords but vol. 2 focuses on those that were conceived jointly for the North American market during the late 1980s—early 2000s and therefore should have more immediate appeal to our mostly North American readership. 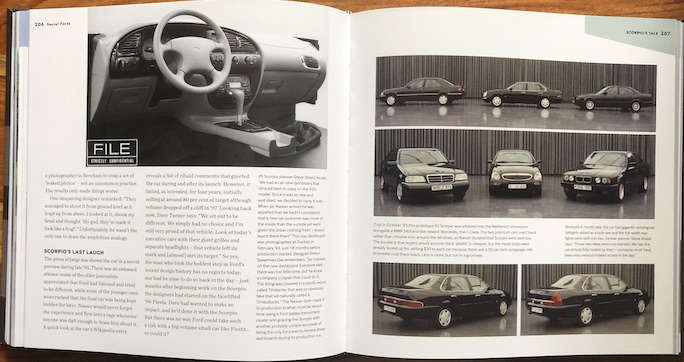 Of course you’ve seen the cars on the right but you can’t know what role they played in the design of the Scorpio, or why it is the only Ford to have had three dashboards during its production run.

But to say it once more: anyone with an interest in car design and product planning and their theoretical underpinnings and practical application—any mass-market car, not just Fords—will encounter in these books a wealth of detail, and candor, not to be found elsewhere.

Each/both of the books is available in a multitude of “trim levels” and combinations, even a 3-volume “RS Special Collector’s Edition.” This variety is almost as complex as specc’ing a new car on the options sheet so we won’t go into the differences here beyond pointing out that the signed and numbered 2-book Collector’s 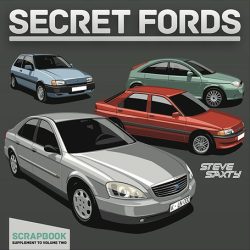 Edition of Volume Two being reviewed here comes in a combo that also includes a short Scrapbook (that develops certain themes that are peripheral to the main book or allow Saxty to introduce his own points of view) and two identical, folded, multi-panel posters. Why identical? Because one side has drawings of cars and the other photos of wheels; by giving you two, Saxty, ever the product planner, allows you to display both sides at once.

It is worth knowing that Saxty also has Mazda, Porsche, and Jaguar feathers in his cap, as well as decades of consulting work so it is not a blinkered view of all things Ford that he presents here. Moreover, the Ford projects are usually discussed in the context of whatever marques/models they were benchmarking. FoMoCo itself took an active interest in this book and gave access to thousands of previously confidential and thus never published photos help tell the story, and the never before mined Ghia archive was made available for the first time. This also accounts for the fact that Ford designers past and present created custom artwork for the covers and slipcases of the book/s. 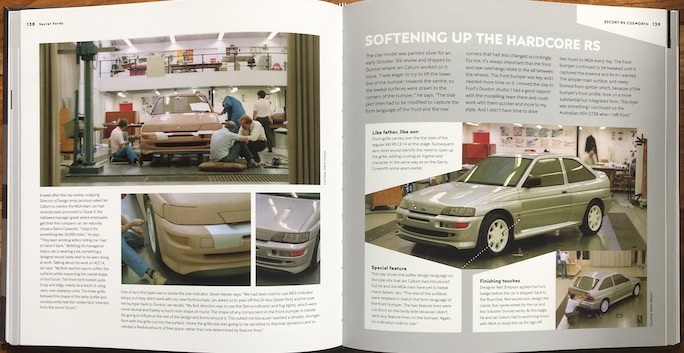 Joining Forewords by Ford CTO Richard Parry-Jones (who died suddenly barely two weeks after committing it to paper) and car designer Ian Callum are countless first-hand recollections by the very people who worked on the various projects. From market analysis to confidential design clinics to shaving clay, absolutely everything is being examined, rumors are dispelled, misconceptions corrected, and dots connected you could not possibly have thought of on your own. 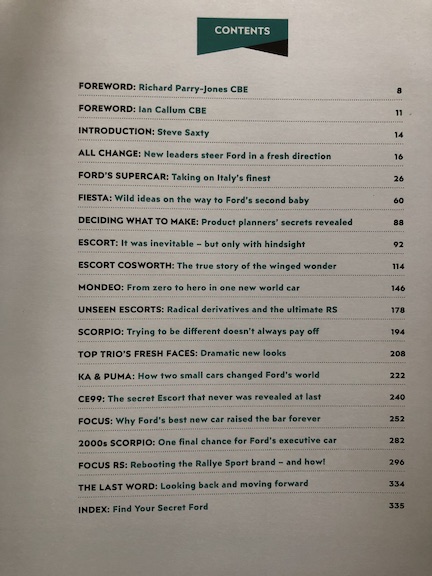 The book/s join Saxty’s first one, The Cars You Always Promised Yourself (2018, sold out but a reprint is in the works). All have been finalists for RAC Book Of The Year awards. Saxty has already hinted at a follow-on to the present book that will take the story closer to the present, plus another one on the design history of BMW.

It is to his great credit that even though he is a highly capable professional in his own right he surrounded himself with other professionals on the editing (Mel Nichols of CAR magazine), fact-checking (too many to list), and book design sides. In every regard the book is superlative. Don’t bother looking for it or any of the other ones anywhere other than the author’s own website because asking prices are all over the place, and his are the best.

More From The Hidden World of Prototypes, One-Offs and Cancelled Cars

The Age of Combustion: Notes on Automobile Design »
« The Story of Henry Ford, A Biography Book for New Readers