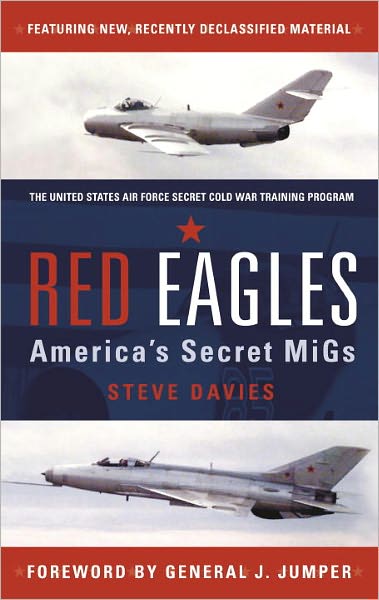 It was only in 2006 that the USAFs black program “Constant Peg” became partially declassified. Until then only the roughly 5900 participants had know that the friendly skies over Nevada had been for over a decade the stage for more than 15,000 sorties of Soviet MiGs duking it out with US Air Force, Navy, and Marine Corps fighters.

The story of the 4477th Test & Evaluation Squadron is still not fully known but UK military and commercial aviation photojournalist Steve Davies pieces together a solid story, helped by interviews with some 30 former Red Eagle flight and ground personnel.

I find it difficult to praise this book highly enough. It would have been easy for the author and publisher to have been carried away with all the hoopla and gee whizz that often surrounds such subjects. Instead we benefit from a carefully balanced, extremely readable account of one of the most audacious programs in aviation history. The depth and precision of Davies’ research is of epic proportions and he does his subject proud.

Even where mistakes and errors of judgment have occurred within the unit, they are dealt with sensitively. This is a book that casts light into the deep dark world of secrets, opening up a vista of previously forbidden delights. It informs, educates and entertains in a master class of investigative journalism. It brings together the facts behind the rumors and hints in order to present them in a most refreshing and erudite way.

Quality research—quality writing. A must for any aviation enthusiast’s bookshelf. Make sure you allow yourself enough time, you won’t want to put it down.

A 2012 softcover edition (ISBN-13: 978-1846039706) adds new material on HAVE IDEA and other HAVE programs and how the MIGs were maintained in the absence of factory manuals, spare parts, or tools.

Posted Under: Aviation, Military | Author: Other | No comments yet