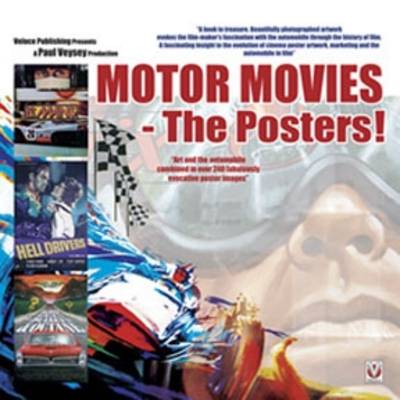 From starring role to bit part, automobiles are inseparable from movies. This book offers a look at the poster art and publicity campaigns.

Written by someone who trades in auto-related movie posters for a living, this book is as much a guided tour of the field of movie poster art as it is a collectibilty guide to the posters themselves. It covers, in chronological order from 1914 (The Lights of London) to 2005 (Wallace & Grommit), those 240 motoring-themed posters (and occasional lobby card) in which the author sees particular artistic appeal. In other words, his selection has nothing to do with the merits of the movies—be they blockbusters or utterly obscure—or the box office cachet of the actors in them but is all about the role of the poster as a publicity vehicle.

The book is all the more interesting because Veysey casts a wide net and doesn’t just settle for obvious: the poster used in the country of the original release. Movies, especially “big” movies were released in more than one country and almost always had specific, dedicated marketing campaigns oriented towards their specific markets. More often than not, different cultural sensitivities resulted in markedly different graphics and wording. Veysey has gone to the trouble to select the one poster that he considers the most dynamic and graphically interesting. A UK movie may, for instance, be represented by an Indian poster. For the reader this entails the occasional disconnect or hesitation that comes from being sure that you know the movie but you just can’t match the visuals to anything you associate with your memory of it.

Each movie is given one page, most of which dominated by the poster. The data panel lists where and when the movie was made, release date, what country the poster is from along with its size, rarity rating, the make and model (if known) of the vehicle used, the principal players, and a sentence or two about the movie.

A Glossary explains the key terms you might encounter in the poster world and points you to other resources for further research. Good Index.

If the posters whet your appetite for the actual movies, you can also buy a complete package consisting of the book and a motoring film archive of nearly 550 films on a 40GB hard drive that can be connected to any computer (laptop or desktop, but not Mac compatible) via a supplied USB cable; £199.99.