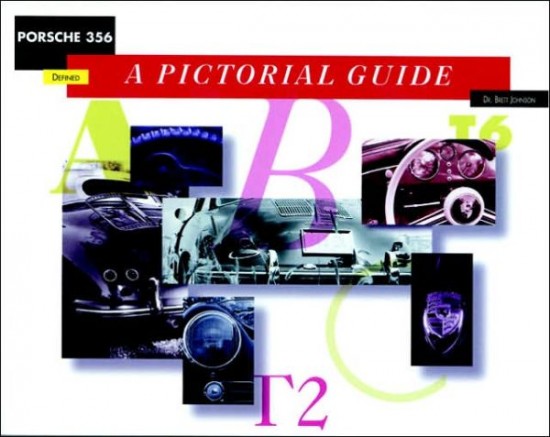 This is a companion to the author’s 356 Porsche: A Restorer’s Guide to Authenticity that is so highly regarded that even the Porsche company considers it definitive. That book saw three revisions and over 45,000 sales and is just now being overhauled for another release (including, at last, an infusion of color).

At its inception in 1948, the Porsche that we now consider the firm’s first production model (i.e. not counting the Type 64s that were built for the cancelled 1939 Berlin to Rome race) did not make much of an impression outside of racing circles. It took the company two years to sell the first fifty cars but after the 1951 Le Mans win, matters improved. By the end of its run with the 1966 model year, about 76,000 had been built of which probably half survive.

In the late 1970s, when Brett Johnson (make that Dr. Johnson; he used to be a vet) began his immersion into all things 356, a car in good shape could be had for $3000–5000. Today you pay dearly for an original or correctly restored specimen, all the more reason to know what you’re looking at/for. Johnson doesn’t just know these cars as an enthusiastic generalist but upside down and inside out because he spent 12 years in the Porsche parts business and to this day manufactures parts for 356s. He was a very good customer of himself because some of the 356s he owned/owns came to him as basket cases. Half of the 16 books he has published since 1988 deal with Porsche minutia. In other words, he knows whereof he speaks.

This “Pictorial Guide” is exactly that, a photo-laden tour of the entire production run, including the prototypes and various coachbuilt versions. Divided by model (356, A, B, C) each section begins with a discussion of major mechanical features, followed by a look at coachwork, interiors, trim etc. To the extent that it is practical, all sections encircle their subjects in like manner and order so as to make it easier to compare: first engine, then gearbox, suspension, brakes, steering etc. and from front of car to back.

By todays’ standards it is amusing that Porsche considered this a “luxury” sports car. The reader new to these cars needs to realize that in the beginning they were essentially hand-built; even Johnson calls the variations in spec and trim “bewildering” but dismisses the notion that “not two were alike” as urban myth. All models, years, and variations are considered and some 75 are illustrated, the latter mostly thanks to the efforts of the 356 Registry’s global membership. (Johnson edited the restoration column in the Registry’s magazine.)

This particular book introduced two especially important data sets into the literature: the most accurate and complete color charts, based on dealer color listings and factory records (but the colors are not actually reproduced), and a chassis number list based on data from Porsche’s Olaf Lang and Porsche author and parts purveyor Marco Marinello (of Elevenparts AG) that goes beyond Porsche’s own lists.

By itself, and certainly together with the Guide to Authenticity, this book is essential to anyone whose interest in the 356 is a serious as that model’s place is in automotive history.

When not wearing the 356 hat, Johnson is involved with his Historic Amusement Foundation that restores and places carousels and other such equipment.