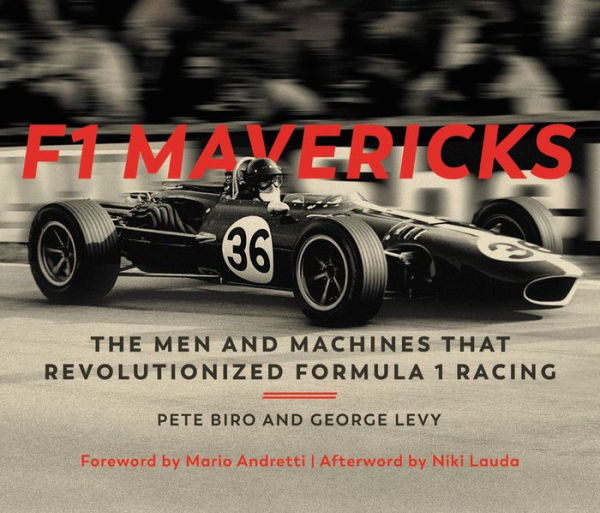 This is, first and foremost, a picture book. Oh, the writer/co-author, veteran auto journalist George Levy has done a fine and credible job with his words, tracing history and profiling the various “mavericks.” He set the stage just right in his intro with these words, “…if you’re looking for great shots from several masters during a golden time, you’ve come to the right (book).” For it is the photos—many of them purely magical as is befitting of the photographer Pete Biro (a bit more related to that “magical” follows) whose name comes first on the title page, dust jacket, etc—that make this book special.

First, an explanation of the very deliberate choice of the word “magical” to describe the images—and share with you one of the more incomprehensible and thus magical images in the book. 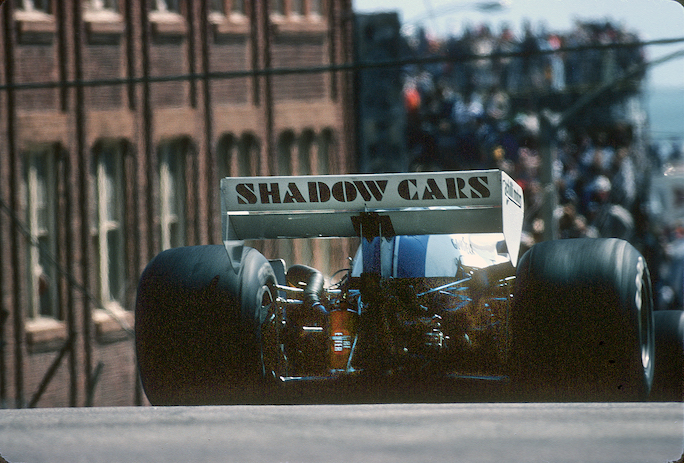 Pete Biro was (and yes, sadly “was” is the correct tense, for he passed just shortly before this book was printed and released) a multi-talented, capable, and accomplished man. His photographic skills were well recognized. But he also was adept at organizational tasks as you’ll read. And he successfully filled the editor’s shoes for a number of years at a monthly West Coast auto enthusiast publication and (full confession) hired your commentator as the “Art, Books & Collectables” columnist. All the while, he was honing his skills in the arts of magicianship which had fascinated and interested him his entire life and had earned him a coveted membership at the prestigious Magic Castle, the clubhouse for the Academy of Magical Arts in Los Angeles. 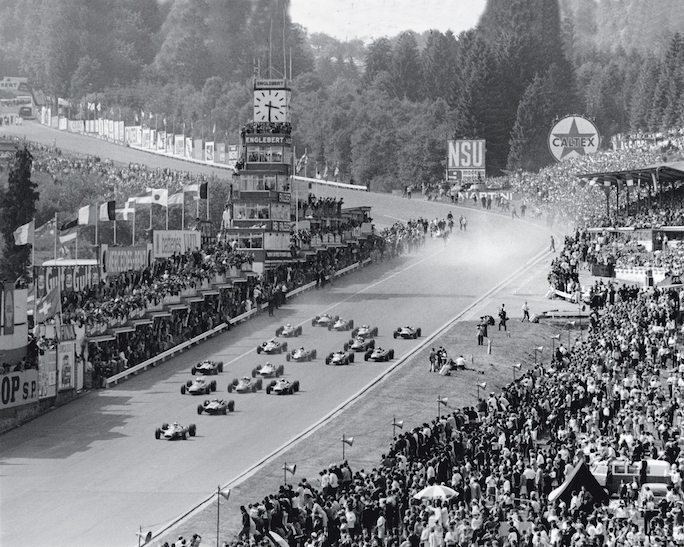 Now for that magical image. Look carefully (below) in the lower left corner. That’s the toe of photographer Biro’s shoe. But look where it is. Essentially on a piece of metal of some sort with nothing solid anywhere to be seen and high—make that very high—above terra firma. Would that Pete was still with us for I’d be asking him “how did you get up there? And what are you standing on or holding onto?” (It appears to me that Biro wrangled a ride in a helicopter and is likely sitting on the right seat, foot braced against the inside of the canopy. -ED) 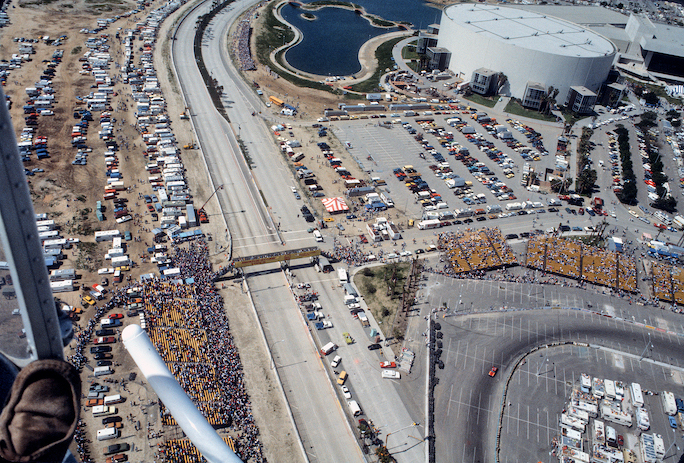 Aerial view of Long Beach GP course and grounds, April 1978.Organizational skills netted Pete Biro being tapped by Long Beach Grand Prix organizer Chris Pook to set up and run the media room providing information and assistance to his fellow photographers and writer/journalists alike. In turn Pete asked his good friend Dale von Trebra, an able professional photographer himself, to co-run the media room. Feeling he needed to stay accessible in the media room during the start of the 1977 race, Pete suggested Dale go out to capture the start, perhaps positioning himself outside the first turn. Thus Dale was in the perfect spot and tripping the shutter at just the right moment to capture this first-turn mayhem: 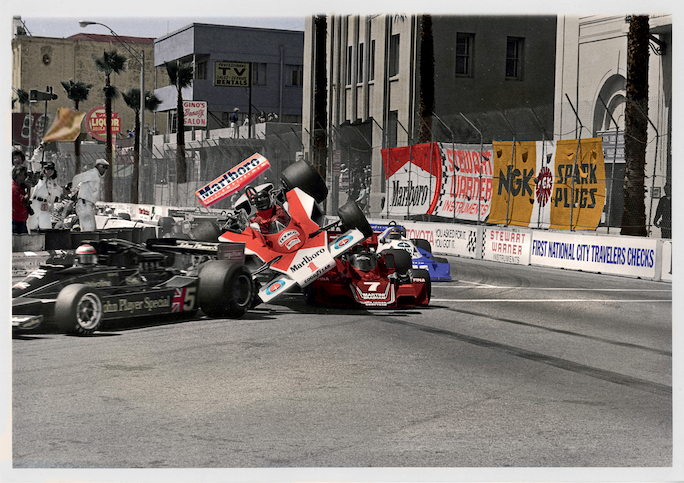 George Levy minces no words saying, and supporting with incident after incident, his contention that F1 as a series, and pointing especially to its management, was lax in addressing safety issues. He writes that it took “paid for in blood” over a decade before F1 started to act like a responsible organizer/governing body. Levy also points to influential drivers like Jackie Stewart and Emerson Fittipaldi and others being outspoken, enhancing the pressure on F1 owners/managers to act.

That said, the images don’t focus on accidents or even the resultant aftermaths. Rather they show and celebrate people, cars, and drivers like this candid shot of Dan Gurney in 1968 at the Canadian Grand Prix at Mont-Tremblant. Today we know he was not merely an able and winning driver but equally adept at designing and building his own racecars and excelling as a team owner too. As Biro captured Gurney in this image he’s clearly showing Dan’s mechanical curiosity: 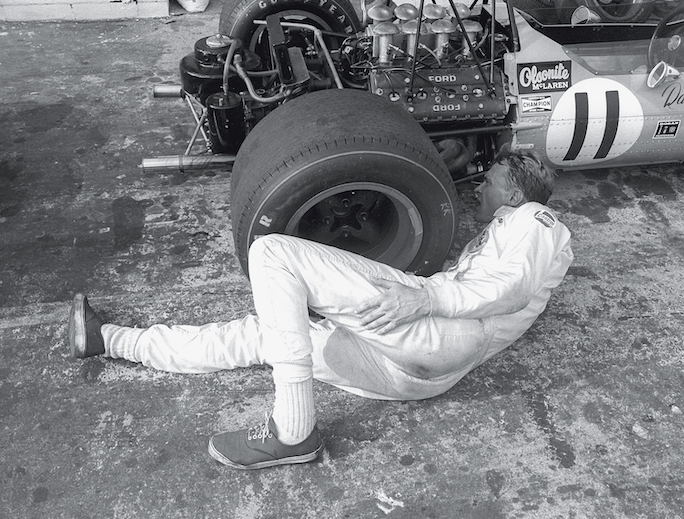 It’s a beautifully produced book with the publisher, Quarto’s Motorbooks division, cutting no corners for the sake of economy. End papers are stunning, different photos front and back and each reproduced double truck. Paper stock and binding is of high quality too.

F1 MAVERICKS shows and tells of The Men and Machines that Revolutionized Formula 1 Racing from 1958 into the early part of the 1980s. Mario Andretti set the tone with his words in the foreword and only recently deceased Niki Lauda contributed the afterword. F1 MAVERICKS is a book to savor page by page.