Damn Few Died in Bed: Memories of a Life in American Automobile Racing 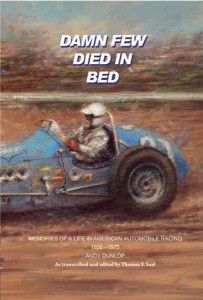 Before the days of even rudimentary safety features, brave and talented men raced brutally fast open-wheeled automobiles on the exciting dirt tracks of Middle America. Dunlop gives us a new appreciation of the lives of the people that crisscrossed the heartland on two-lane highways to compete in America’s bull rings on Saturday nights and Sunday afternoons.

Beyond its historic significance, the joy of this book is that that thanks to Tom Saal’s seamless interviewing, Andy Dunlop conveys to us why sometimes, given the equipment and the circumstances, a third-place finish is a far greater accomplishment than an outright win.

Oval racing, first on dirt only and later on dirt and pavement, is uniquely American. The cars evolved from the short-wheelbase upright cars for dirt to the longer, lower, and more powerful Championship roadsters and eventually to the rear-engine cars that dominated the big paved ovals like the Indianapolis Speedway. This is the history of that evolution and the men who lived it.

Early in his long career Dunlop was a successful racecar builder and team manager of his own dirt track cars. His partnership with Wally Stokes in 1948 resulted in 27 wins and a degree of peer respect that remained his throughout his career. Ironically, Stokes, who risked life and limb every weekend on a dirt track, was killed in a tragic road accident enroute to yet another race. Dunlop was a machinist and an inventive man. That is how he earned a living in the off season. But he loved competition and was drawn back into racing as the chief mechanic and team manager for Pete Salemi’s Cleveland-based Central Excavating Special team. Together, they contested dirt and pavement events nationally. In the early days of his career, Dunlop did well and he shares with us the sizes of the purses he won. To this reader, the amounts, for the time, are not inconsiderable. It is not surprising then, that talented drivers would seriously weigh the risk against the opportunity. It also explains why drivers would drop a car owner in an instant for an opportunity to drive a better car for a possibly better reward. Though many names in the book, such as Foyt, Andretti, Ward, and Ruby, survived and even moved on to other fields of racing, many more paid the ultimate price for their “opportunity.” While the title of the book is apt, this is a book about those who lived the life, not those who died trying.

The view of the annual Indy 500 (oval racing’s Holy Grail) from a competitor who often stood little chance of winning, and often even qualifying, is worth the price of the book. The narrative skips over the Memorial Day hoopla to explain how the improvements in the cars and surface paving of the “brickyard” changed racing dramatically at this most financially important track. In the early years, Dunlop’s teams were competitive, but later, with dated equipment, they struggled to qualify against the rear-engine revolution. Though he infers that others did, Dunlop appears not to resent the changes being brought to Indianapolis by the Europeans. His disappointment with change is brought about by his economic circumstances. His team simply cannot compete with the well-financed Europeans.

It is the endearing manner in which Saal crafts Dunlop’s narrative that has the reader believing that the next page is about the next season, the next race, the next day, and that we will read about a single stroke of fortune that will set his team at last on the path to glory and riches. But this is not a novel, and in the end, Andy wins only six times in the fourteen years the races with Pete Salemi. The equanimity with which Dunlop accepts his lot is remarkable. We are given the picture of a man who makes the absolute best of what is set before him, and we rejoice with him in the small triumphs came his way. By book’s end, Dunlop’s ability to achieve what he did with what he had wins us over. This book is a remarkable journey for the reader, and if you love racing, you will want this in your library.

A few notes about the book itself. The pictures, many in color, serve the purpose of putting faces to the names, and are better than what you might expect from pictures of the 1940s to the 1970s. The inside front cover picture and rear cover picture are exceptional. They are action pictures that any race fan would covet. Also Peter Hearsey’s cover painting captures the grace and the violence of dirt-track racing with Art Bisch at the wheel of the Dunlop’s Central Excavating Special. Notes by historian Joe Freeman (who is also the publisher) at the beginning of each chapter give context to what we are about to read: a nice touch that sets the background for the action in Dunlop’s narrative.

This is a beautiful book about a gritty kind of racing. The fine “feel “ of the book, its smooth hefty pages, and its art are well worthy of the excellent text.