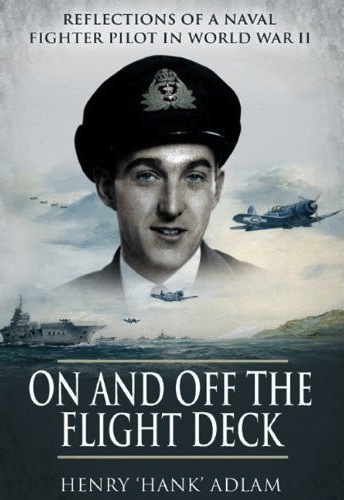 by Henry A Adlam

If your eyes are glazing over at being proffered yet another memoir of WWII flyboy derring-do, relax. This one is different. The very “ordinariness” of the protagonist’s service record makes his experience much more representative of the vast majority of combatants.

Adlam was a fighter pilot; he did his job as well as possible and necessary. He didn’t shoot anyone down, broke no records, ushered in no new chapter in aviation history. He considers his piloting to be “as good as that of most, and probably better than many” and his career ordinary. You will come to see him as a Weary Warrior who was glad to stop combat flying, disillusioned, saddened by the loss of friends’ lives.

Without knowing the man personally it is impossible to say if his particular brand of realism is a natural disposition or a defense mechanism. The very first episode he relates is of ending his first nighttime solo with a crash landing. One the next page we are, figuratively, ankle-deep in cockroaches and “grossly overloaded and filthy” lavatories. This may not sound glamorous—but that’s just the point: this is how life was for the young recruits. And it is so easy to forget how young they were. Adlam himself was only 19 when he signed up, others may have been fresh out of school, all interacting with people from radically different walks of life (recall that the Britain of those days was much more class-conscious), and war just a stone’s throw away. This is the picture Adlam paints. There’s no shortage of airplane talk but the flying is always “grounded” in the living.

The book very much has the tone of chatting with someone over a pint, not just because it is, obviously, in the first person but because of an ambling, conversational pace and anecdotal way of advancing the story. He tells you how the rudder feels through the pedals or the hot oils smell—and you’re there with him in the cockpit. And you’re there for the anxiety of trying out new planes, the stress of the exams, the terror of combat, the cramped living quarters on a ship, and the joys of shore leave. For convoy duty in the North Atlantic and offensive operations against the Japanese in 1945, Adlam flies Wildcats, Hellcats, and Corsairs from carriers. To call his pilot’s impressions of the aircraft candid is an understatement, but he is not stuck on mindless criticism. The Supermarine Seafire, for instance, was in all objectivity initially a problematic aircraft but he concedes that it matured postwar into a better plane.

Naval aviators from other countries will find several other items Adlam shines his spotlight on interesting: the seemingly low status accorded aircrews on British carriers, the folly of putting non-aviator bureaucrats in charge of operational decisions, and the general disconnect between doctrine and actual combat situations.

If you want a “tell it like it is” account of the day-to-day life of a WWII aviator, warts and all, this is the book. Maybe it was cathartic for Adlam to write it, 60 years later, but whatever his reasons, you’ll end up glad he took the time to do it.

All photos are combined into one 8-page section; they include two aerial paintings by Adlam (quite nice but nothing is said about them!). Appended are his 1941–49 postings by ship/position, squadron, and aircraft. Index.

Porsche and Me »
« Why Not? The Story of the Honourable Charles Stewart Rolls