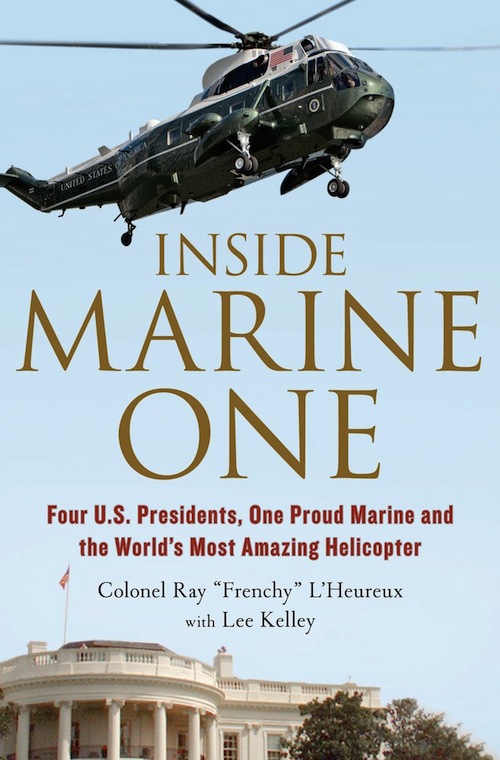 Four U.S. Presidents, One Proud Marine, and the World’s Most Amazing Helicopter

“Most people see the President only through the lens of the media or news, and very few people know anything about HMX-1 or the inner workings of the green-and-white helicopter that they see landing on or taking off from the White House lawn. I’m the grateful guy who had a bird’s eye view of it all.”

Just last month (July 2014), current US president Obama logged his 1,000th ride on Marine One. Of all the President’s modes of official transport, the helicopter/s get used most, even overseas. If you didn’t realize it, the US is the only country whose leader takes all his gear with him on the road. It ain’t cheap, and while that’s a different story the reader should know, if only for the sake of context, that a new and improved 20-odd helicopter fleet deemed necessary after 9/11 may come on-line around 2020 (unless it gets cancelled a fourth time!)—with a price tag in the billions of dollars.

Whatever the final spec may be, it is certain that the Chief Executive’s ride will be, as the subtitle says, “the World’s Most Amazing Helicopter” because it’s not just an off-the-shelf aircraft. If that is your reason for wanting this book, temper your expectations! Performance, capabilities, and construction of the specially missionized (down, boy; this is a word!) VH-3D Sea King or the smaller VH-60N White Hawk currently in use are highly classified. (“Marine One/Two,” or “Army One/Two” before 1976, don’t denote specific machines but are only call signs for any aircraft—including, hypothetically, your own—the President or Vice President happen to be occupying. There’s also a “Peloton One”—and you can read about it here!)

In real life, USMC Colonel (Retired) L’Heureux is animated, engaged and polished too, qualities that stand him in good stead even in his civilian job these days for the Hawaii Department of Education where he tries to give the youth there a leg up in life. The book captures these qualities but comes up a bit short on the spit and polish side. There are a few glitches, mostly continuity and consistency errors and quite a few typos that someone below his pay grade ought to have caught and fixed. Examples of such would be things like saying good-bye to a “wife” when he ships off to boot camp (p. 20) and then “getting married” right after his return (p. 28). Something that is rather more grinding for an aviator is getting his aircraft wrong. In one sentence he describes his Beechcraft T-34 training aircraft as a turboprop [as in propeller] but in the next one calls it a “jet.” These are minor items, and the only reason to waste ink on them is because we must be thorough.

L’Heureux is a consummate flyer and devoted Marine; at least he started out in this order although over the course of a 30-year career it may have reversed itself. He gives a very inspiring account of what is to become—and remain—a Marine, from individuality-breaking boot camp through world-class leadership training at the War College. No matter what a reader may think of the military’s role or culture, the pride L’Heureux takes in doing a complicated job in a zero-fail environment should resonate with anyone.

He served two stints in HMX-1, the Marine Corps’ largest aviation squadron, first as pilot and then as CO. You’ll come to see that becoming the President’s pilot has odds that are only slightly better than becoming President! It is a really big deal and L’Heureux carries that pinch-me excitement throughout the book but also maintains a sense of proportion. For instance, for him as a devout Catholic an even bigger deal than flying presidents Bush 41, Clinton, Bush 43, and Obama was flying and interacting with the Pope. Think of religion what you may, but if the sincerity of a war-faring man being attuned to the larger matters of life and death doesn’t move you . . . well, your loss.

The world he describes here is closed to most; even of the 70-odd hand-picked pilots, only four plus their CO actually fly the President. From seeing what makes a helicopter work, to playing “Walleyball” with President Bush 41 at Naval Support Facility Thurman aka Camp David, to operating the “lift package” in a global theater of operations, the reader gets what L’Heureux early in the book calls “a human story, told in human terms.”

Also covers the other two roles of HMX-1 and squadron history. Index.

Four U.S. Presidents, One Proud Marine, and the World’s Most Amazing Helicopter