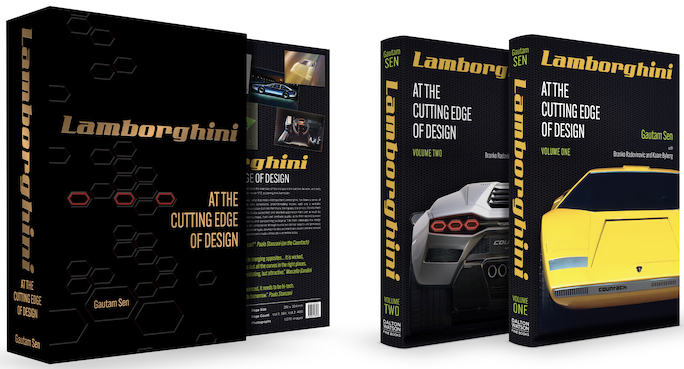 “Yet another book on Lamborghini—what for? Yes, that could very well be the reader’s first reaction, and it would be justified, as scores of books have been published on the Raging Bull marque. No doubt, most of these books have covered almost everything that needed to be said about Ferruccio Lamborghini, those magnificent Lamborghini models, the men and women involved with the brand, the many stories, legends, myths, and anecdotes with this super-specialist niche carmaker, one with such a rich and storied history.

Yet none have focused on the single most important aspect, which has made Lamborghini so famous: its amazing design history.”

Could that really be true, no design book? It is always a reassuring sign if an author demonstrates awareness of the already existing literature, but this seems like a bold statement, divisive even. Lead author Gautam Sen certainly does know his auto design history, having contributed several tomes himself, especially on the Italians so let’s not get hung up on this because what is without question true is that never before has there been this sharp a focus or grand a treatment. It is rich in detail and presentation and, heck, let’s just say it because it’s too much fun not to, it’s a 12-pound wrist-snapper. Once upon a time . . . this book was intended to be half the size it is now. This would not have been a good thing, so, first things first: kudos to the publisher for letting it grow.

Authors are never short of persuasively argued reasons for wanting to make their book longer. They will meet resistance in the form of the publisher’s marketing and accounting folks who will want to rein in such impulses. In the case of this publisher, Dalton Watson Fine Books, all those people are one person. Well, two. That direct line between horse and mouth is certainly why certain manuscripts go to this publisher in the first place. But that’s its own story. 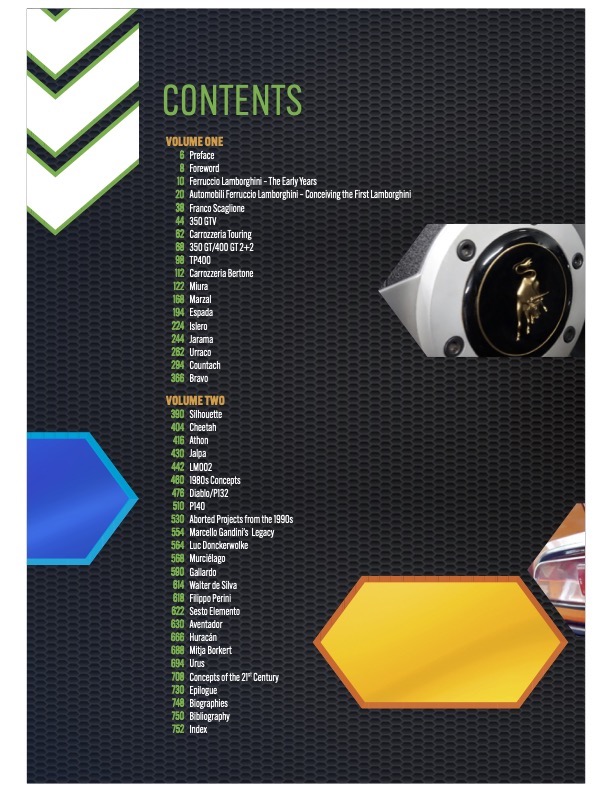 For the purposes of this review let’s just say that it is well nigh inconceivable that a regular reader of this site would not have seen a Dalton Watson book before. If so, please, never admit to it. This Lamborghini book can sit proudly next to the other bookshelf-benders that bear the DWFB imprint.

That the book was meant to come out a year earlier, well, blame it on Covid. And that date surely would have been particularly satisfying to all involved because DW books often get launched during the Pebble Beach concours and it was 2021 that the concours had a class dedicated to Countach prototypes and variants on the occasion of that model’s 50th anniversary. 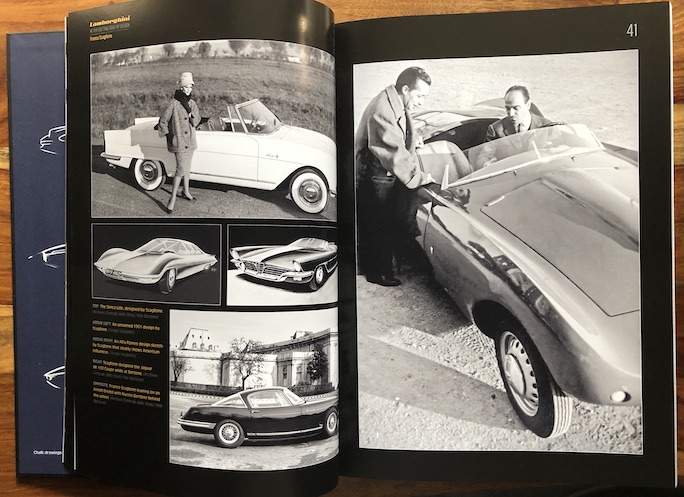 Already a look at the front and back endpapers—a selection of 12 of the most distinctive car silhouettes (just visible above)—illustrates a key point: whoever said “Lamborghini is a carmaker that makes engines, the job of the designers was to design the engine cover” is not seeing the full picture. In the supercar maker’s decades-long history there have been only five powerplants but many more body styles. That five of the seven designers are still alive and can be talked to adds detail to this book that will not be as easy to access for future writers. 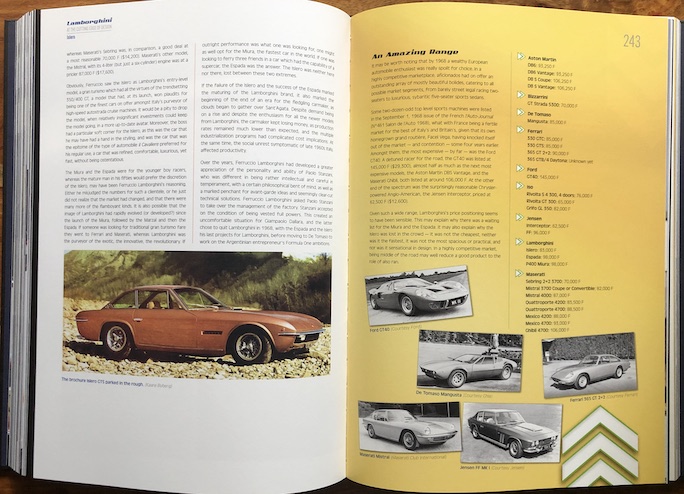 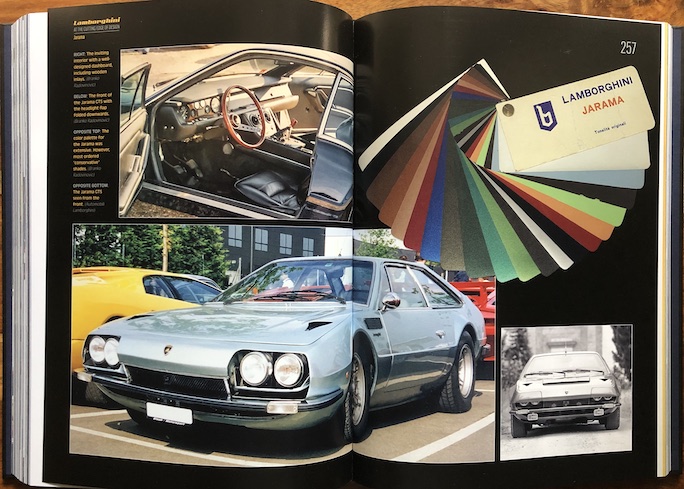 Beginning with Lamborghini’s upbringing and professional career, the story unfolds unhurriedly, giving consideration to even such peripheral but unceasingly titillating matters as whether it was a personal confrontation between Enzo Ferrari and Lamborghini that so provoked the latter that he started his own car company. It is here ruled “unlikely,” in fact there is no actual proof the two men ever met in person. What is provable is that Lamborghini thought he could build a better car and make money at it. The learned Foreword, by former GM designer–turned–author/design critic Robert Cumberford, puts into context the vagaries of the car-making business and, by extension, the odds facing Automobili Lamborghini in its drive to survive and occasionally even prosper. Cumberford, who des not suffer fools gladly, calling this book “a prodigious effort” and at last “a clear picture” is really all you need to know. 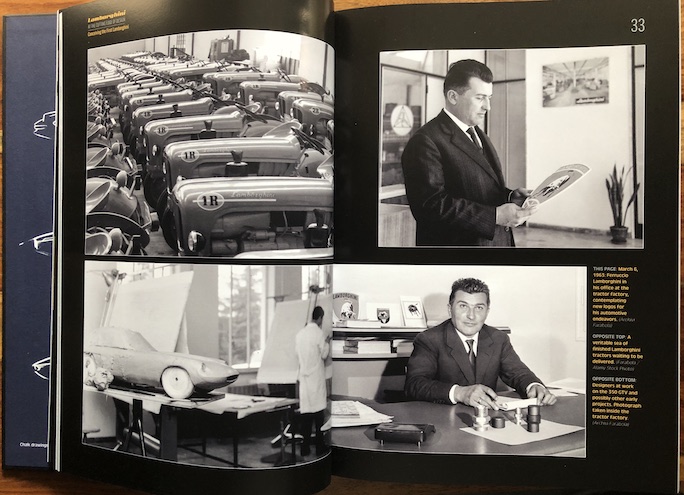 “You can drive a tractor, but you’ll never know how to drive a Ferrari,” said Enzo F. to Ferruccio L. But did he really? Lamborghini really did have clutch problems with his Ferrari and he certainly detested the high prices, not to mention Ferrari’s arrogance that spared no one.

If you do need to know more, maybe because you already are steeped to the gills in Lambo lore, know that the book presents previously unpublished documents and images. This is at least partly due to each of the three authors having specialized interests and their own separate research areas. Radovinovic, from Australia, is a photographer and writes for Lambo club magazines and Byberg, from Norway, is deep into Lamborghini-related automobilia and material. There are innumerable examples of nano details woven so deftly into the narrative that even subject matter experts may not catch them right away. Just one example: it used to be rumor that Bizzarini’s pay was based on horsepower/engine output; now there is a data point to back it up. 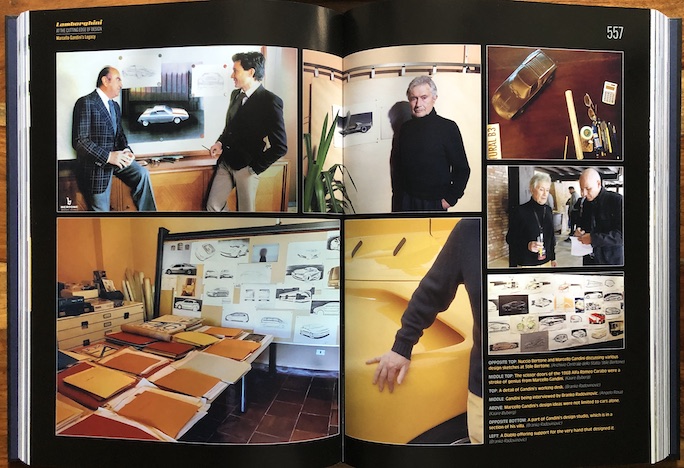 Even if you are ambivalent about Lamborghini design (whaaat?) the various designers are discussed in the context of their work on other marques so there are a lot of other discoveries to be made here.

Both volumes (paginated consecutively) contain the Tables of Contents for each but only Vol. 2 has the Index—subdivided by models, cars other than Lamborghini (how thoughtful!), companies, media, places, people—and biographies, bibliography etc. That the books are smartly designed is a foregone conclusion—but can never be taken for granted, so, drum roll, please.

And for the folks who grew up with Countach posters on the bedroom wall: there are four 4-page-wide fold-outs of sketches and a brochure cover. Do NOT cannibalize the book for them. . . . The publisher should make them available as an optional extra! 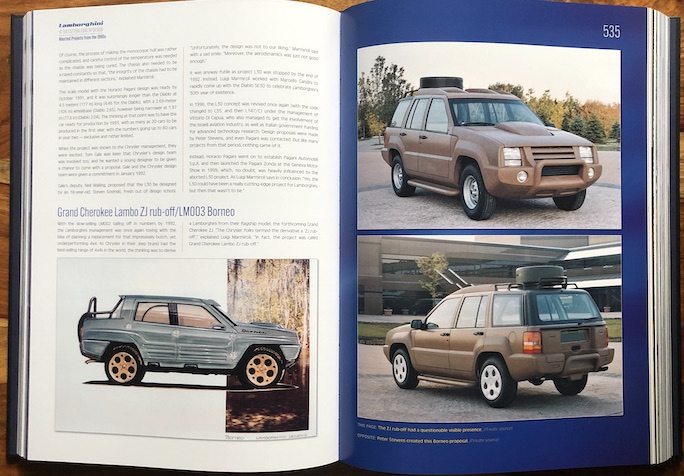 Did Jeep really need a Lambo SUV, in the 1990s? Or ever? The caption, politely, alludes to “a questionable visible presence.”