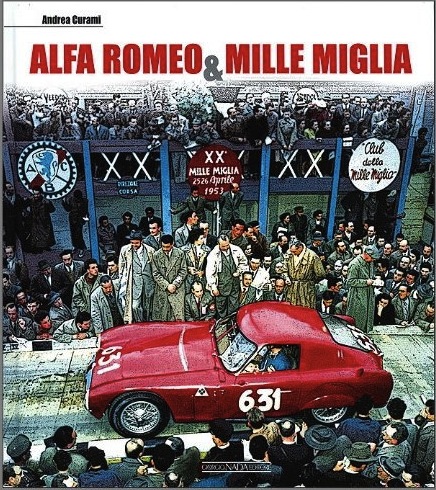 (Italian/English side by side) Published in the year of Alfa Romeo’s 100th anniversary, this book follows the Porsche and Mercedes Benz volumes in a series of books by the late Andrea Curami (d. 2010) about the Mille Miglia efforts of specific marques.

Conceived in 1927 by Aymo Maggi, Franco Mazzotti, Renzo Castagneto and Giovanni Canestrini, the 1000-mile race from Brescia to Rome and back sought to improve road conditions and increase road use so as help the car industry sell cars. In the period from 1927 to the last edition of 1957, interrupted from 1939 to 1946 by World War Two, the route saw many variations. After the war the race even used the new Autostrada from Torino to Brescia.

Car manufacturers were always attracted to it (from 1953 it was a round of the World Sportscar Championship), but privateers played the biggest part, amounting in the best years to as many as 500 entries. Following the progress of the race was rather easy, despite the length of the circuit. The cars were started at specific times in a staggered manner, and that time ist the cars’ starting numbers and painted on their sides. Take out at a modern map of Italy and look at only the B-roads—and imagine the record round of Moss/Jenkinson of a little over 10 hours for 1000 miles. Unbelievable. (A good account in English is Mike Lawrence’s The Mille Miglia, Batsford, London, 1988.)

Alfa Romeo did very, very well in the Mille, winning 45% of the time or 11 races out of 24. They won all but one of the prewar races (1927), ceding dominance to Ferrari in later years.

Curami tells the whole story of the participation of Alfa Romeo, both works and later privateer teams. In chronological order each chapter covers one race, talking about the cars, drivers, and key events. The storied cars are the tipos 6C RL SS, 6C 1500SS, 6C 1750 SS/GS, 8C 2300/M/Monza/B Pescara, 6C 2500, 8C 2600 and finally the 8C B2900. After the war Alfa Romeo came back in the early fifties with the 412, the beautiful Disco Volantes and the 6C 3000CM. The privateers too were armed with the whole range Alfa had to offer. Especially after the war the starting grid was filled with 1900 Touring cars and hundreds of Guillettas in all forms, Veloces and  modified Spiders, always contenders for class wins. As an aside, for some years there was even a Mille Miglia class for military vehicles and Alfa’s 1900 (AR51) ran in that. Drivers such as Campari, Nuvolari, Borzacchini, Biondetti (four wins alone), Pintacuda and others were the heroes who brought the Alfa Romeos home in first positions. 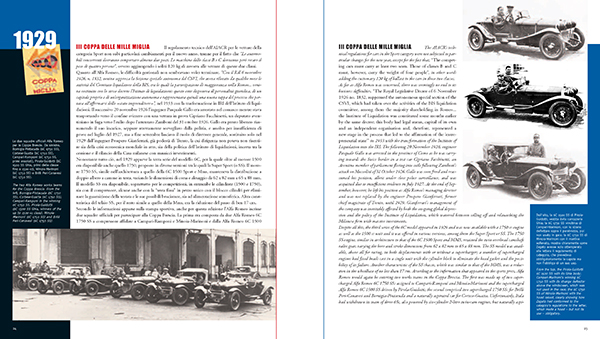 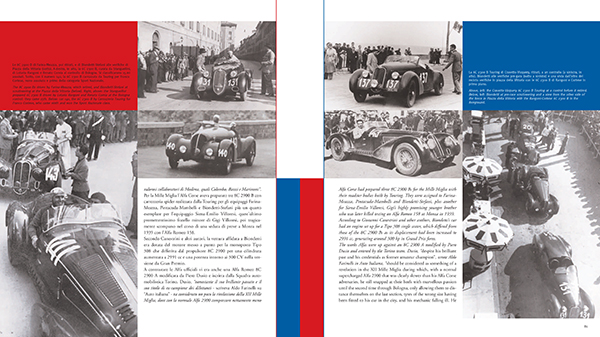 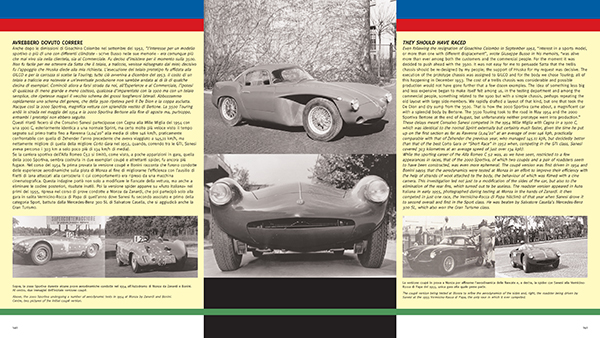 This book brings together all the great moments of the dramatic races, partly run in appaling condition. Interspersed are some chapters on cars constructed by Alfa Romeo but then not run in the Mille. The text is bilingual, on opposite pages; the captions are very  detailed and informative. Curami has had access to the Alfa Romeo archive and the Novaphoto/Sorlini photo collection. Wonderful period photos (some even in color) illustrate not only the works entries but also the vast number of private Guilliettas. The introdcution to each year also reproduces the respective Mille Miglia poster and a road map which is in most cases so small as to be barley legible. The layout is fresh and the design colorful. At the back is a table listing the overall wins, class wins, start numbers, and date and distance of each race. (It only lists the winners but not all starters in Alfas)

The cover illustration is a Photoshopped version of a photo used elsewhere in the book of Sanesi-Cagna’s 6C 3000 CM at the 1953 Mille. As with all such books, in my opinion, it is the photos that bring it to life. Here especially we find many that had not been published before. There is a short Bibliography but no Index.

Posted Under: Automobiles, Italian, Racing, Rally | Author: Other | No comments yet

The Art of the Airways »
« Legendary Car Engines: Inner Secrets of the World’s 20 Best