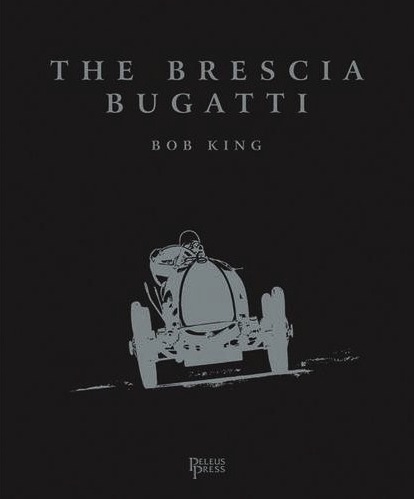 An offspring of the Type 10, Ettore Bugatti’s first car and built in his basement after coming home from his day job as chief engineer at a German firm founded by the man who invented the four-stroke internal combustion engine, the Type 13 received the “Brescia” moniker after sweeping the 1921 Brescia GP 1st–4th.

If it’s good to own a Bugatti, it’s better to own a Bugatti and a publishing company. In this fortuitous combination lies the genesis of this book. As the owner of Brescia chassis #2468 publisher Paul Latham must have been irked by the irony of owning the one Bugatti model of which more were built than any other—but about which the least has been written. He tapped fellow countryman and Brescia owner Bob King to rectify this sad state of affairs.

King—a daytime physician, nighttime wrench-slinger, and weekend racer—has had the good fortune of owning six Bugattis over several decades. Owning a Bugatti today represents a literal fortune but when King encountered his first one, and quickly bought it (#2569, missing from this book and therefore presumed no longer extant) in the early 1960s, even a Brescia with proper racing history was pretty much just another old car. Interesting, fast certainly, but without any hint of becoming a blue-chip top-tier collectible. Consequently, King had no qualms about wringing his car out, thus learning its virtues and vices in uncommon depth. He also applied himself to learning about the marque in general, co-founding the Australian Bugatti Register and documenting the history of OZ/NZ bugs (see his 1992 book Bugattis in Australasia).

All of the above become building blocks for a thorough and, ultimately, important book—even if it does not account for every Brescia chassis known or thought to exist. It is important to get this caveat out of the way early on because it is the proverbial elephant in the room. And it is irritating to follow the mindless carping in various Internet chatrooms from people who criticize the book but obviously didn’t bother to grasp the very first paragraph, in which King says that the book is “devoted to surviving Brescias, featuring material provided by their owners.” Short of visiting every chassis on the planet in person King depended on owner-supplied information, vetted and reconciled by the gatekeepers in the Bugatti community—club registrars, marque historians etc.

Elsewhere he addresses other specific issues that complicate any attempt at a definitive accounting: right from the factory Brescia numbering was “not straightforward” (lamentable, but common enough) which is only exacerbated by the usual litany of problems that affect most vintage cars: engine/chassis swaps, rebuilds, modifications, replicas etc. There is another factor that seems to afflict the Bugatti community more than others: an absurd, peculiar reticence among owners to step forward. From threats of lawsuits to persistent radio silence, more than one worthy project in the past (Sewell, who instead contributed to this one; du Gann; Laugier; Simon etc.) has been frustrated or altogether abandoned. If anything, King is to be congratulated for having compiled as much as he did.

It is especially because the Brescia has been rather marginalized in the literature that King makes an effort to cast his net wide to properly set the scene for this model. Readers new to the marque, or even just this particular car, will find his nuanced exposition perfectly satisfying and engaging. From the artistic stirrings in the wider, multi-generational Bugatti clan to young Ettore coming in his early teens under the tutelage of an artisan during his apprenticeship, the reader is given a glimpse of how early influences (such as the lack of formal training begetting a reliance on intuition that must fight for balance with Ettore’s impetuousness) would forever characterize the man as much as his cars.

The book is noteworthy on another score. King has unearthed some new material and, even more delectable, set about reinterpreting certain points on which there has long been debate at the highest levels of automotive historians; to wit, the question of whether Bugatti was a copyist or an innovator. The novice reader may well find all this a bit esoteric but, regardless of your own opinions on the matter, it is a well-presented piece of forensic work.

Almost a hundred pages are devoted to thus connecting the dots. The text inevitably touches upon technical matters, understanding of which is helped by the reproduction of technical drawings and even patents. The latter were provided by Dutch patent attorney Dick Ploeg who, King hints, is working on a monograph of his own about just that. Unique to this book are 16 color and b/w drawings/paintings by the late Australian automobile artist Bob Shepherd. The many, many photos are very well reproduced and thoroughly captioned and also credited. They are augmented by sketches, ads, brochures, and several etchings by Bugatti designer Auguste Dubois.

The section on surviving cars (i.e. those whose owners bothered to make themselves known) spans some 200 pages and covers 225 models in order of chassis number, on one to several pages each. Many of the photos here are of restored cars and thus new to the record. The accompanying text relates build, competition (if applicable), and ownership highlights. A uniform data panel records type, chassis/engine numbers, current owner/date of last acquisition, coachwork, and previous owners.

The Appendices are printed on different paper (too stiff for this reviewer’s taste; doesn’t want to stay open). They include a chassis register, bibliography, and author info. The Index is good (nice touch: owner names are listed in italics) but does not list everything or every occurrence of certain entries.

The book is designed with pleasing attention to detail: appropriately sturdy cover boards (imprinted with a custom illustration by Mike Harbar), substantial paper, each page “watermarked” with a facsimile of Ettore’s signature, even a bound-in bookmark looking like a 1966 gate pass to the Prescott hillclimb, and well thought-out typography.

If there is a regret it is that the high price and low print run preclude the book from the widespread attention it deserves. Considering that no other book to date covers this territory, Bugattistes are not well served and it seems a wasted opportunity for the publisher/author to make a much bigger splash!