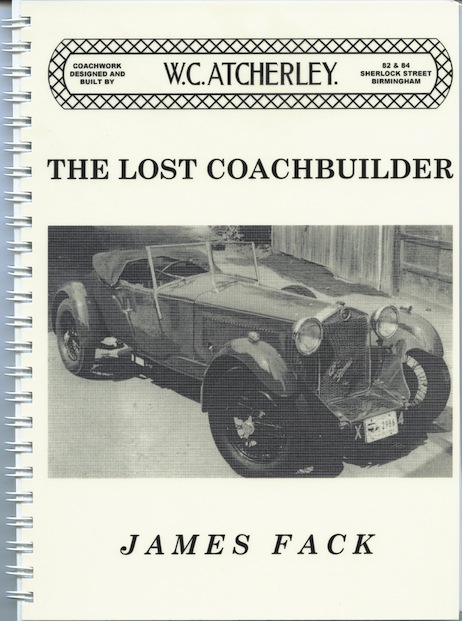 This is not a large book (European A5 format), this is not a glossy book (not a single color picture, and even the b/w ones are not remarkably crisp), but in spite of all this I reckon that this booklet is worth a review because Atcherley was a recognized “quality coachmaker” and W C Atcherley had the unfortunate and preposterous idea of destroying all the company’s archives and records! James Fack has written the only book that has ever been offered on the market, and most likely it will remain the only book ever written on this Birmingham firm.

This area of England was blessed with several coachbuilders and it wouldn’t have been fair to leave Atcherley out of the records, especially while it was still possible to gather first-hand information in the area to finally gather material for this story. Had Fack not taken on this project, I fear Atcherley would have become totally unknown in less than a generation.

Most of you will probably not have heard of this coachmaker even though they made bodies on such prestigious chassis as Rolls-Royce, Aston-Martin, Hotchkiss, Bentley, Invicta, Minerva, Alfa Romeo, Daimler, Humber etc. A list of the chassis appears on page 10. Being a small firm, they didn’t build more than a few examples on each marque—a mere 10 on Rolls-Royce chassis for example.

The book’s layout is not uninteresting: all even pages show a couple of photographs and all odd pages contain text and an occasional picture. The book opens on a short biography of W Clive Atcherley and general background. It is followed by a dozen individual car histories in chronological order, illustrated with photographs taken from the press or sent by owners.

The next chapter elaborates on the cooperation between Atcherley and George Brough, of Brough Superior fame. This is the most interesting part of the book because it shows how a car make (largely based on the American Hudson car) could come into being. The prototypes are described in detail, as well as the first production models. This was the prewar era when ground-up bespoke coachwork was still the norm, as opposed to the standard bodies with just a few colorful touches that “bespoke” seems to mean nowadays. Of course the production numbers of the Brough Superior were far higher than those of the other makes—over 100 examples—but due to several causes, some of them technical others economical, the Anglo-American car was to disappear a few years later.

The technically minded reader will be pleased to see a list of Atcherley patents (p. 77). Atcherley died in 1974 and thanks to James Fack and the Railton Owners Club, which also caters to Hudson, Essex, Brough Superior, and Terraplane owners, Atcherley-bodied cars are now part of history.

James Fack also wrote a book on the Terraplane, again, not the kind of motor you often see on the roads!