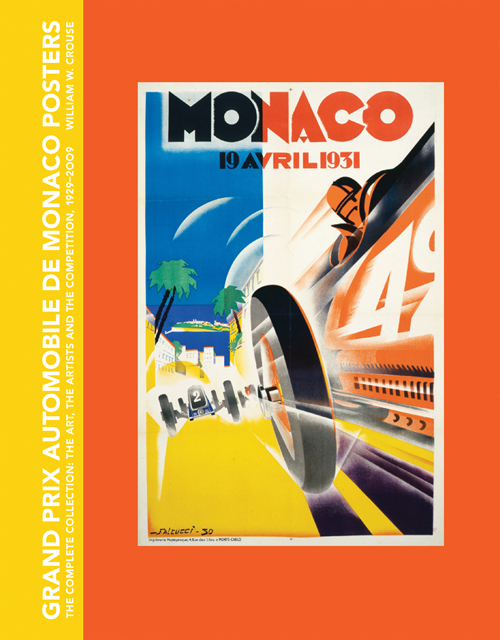 Smaller even than New York City’s Central Park, the Principality of Monaco, a sovereign city state on the French Riviera, is the second-smallest and most densely populated country in the world. It boasts a long list of “leasts” and mosts,” among the latter the world’s longest life expectancy—unless you are a race driver hurtling an F1 car through its narrow city streets that contain both the fastest and the slowest corner in F1. Nelson Piquet famously described racing here as “riding a bicycle round your living room.” If it weren’t already a sanctioned GP, and with singular history and prestige to boot, it would be banned—and may yet be!—from the F1 schedule for safety reasons. (It is also the only GP to fall short of the mandated minimum race distance.) Until that happens, the Circuit de Monaco will hold fast to its claim of holding the longest-running GP: except for WWII and four skipped years in the 1950s there has been a race here every year since 1929. 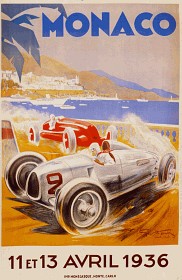 This beautifully designed book relives that remarkable history in the form of race posters, both from the GP and the Rally Monte Carlo which not only predates the GP but spawned it because the Automobile Club de Monaco needed to come up with an event that would make it eligible for being accorded national, not just regional status. Author Crouse dispenses this and a thousand other details with aplomb—all the more remarkable considering that he came to this subject by being nudged into it. You can thank his art dealer for that. The time is ca. 1997 and Crouse was already a collector of coins, wine and fine art and seeking to diversify. He resisted the idea of collecting posters but upon looking deeper into the matter found them “indisputably beautiful, captivating, and valuable”—the connoisseur’s trifecta. 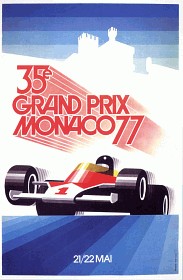 It didn’t take him even five years to collect all the posters created by then (2009), no small feat and involving heavy-duty contacts in the field many of whom would later contribute their knowledge when Crouse realized his may be the only complete collection and that he owed the world a record of it. Over the course of two years he researched the races, the cars, the drivers and the artists (even interviewing some of each), and the evolution of the poster as an art form. The result is this splendid book that explores all these aspects in the service of its main focus, showcasing each year’s race poster. 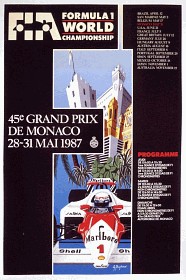 The descriptions begin with a few remarks about the artist and the style of the poster and then zero in on the specific imagery, describing the cars, drivers, and circumstances in the scene depicted. Whether your interests lie with the posters or the racing, everyone will find something useful and engaging here. Period photos, other pertinent visuals (race programs, Monte posters etc.), and alternate versions (cf. 1987–89 which featured “unofficial” posters) are included as relevant. The early years are covered on mostly two pages, with the poster taking up a full page. When in later years photography replaces drawings, and commercialization and “design by committee” take precedence over artistic vision and expression, coverage is reduced to one page per race.

For the sake of the racing novice one might lament that only a 1935 track map is shown even though the course changed nine times over the years. Appended is a table showing in year order artist, driver, car constructor, laps, and time. Bibliography, no Index.

Limited edition of 2000. The book design (by Russell Hassell) is absolutely first-rate, from the multi-colored linen boards to typography and page layout.