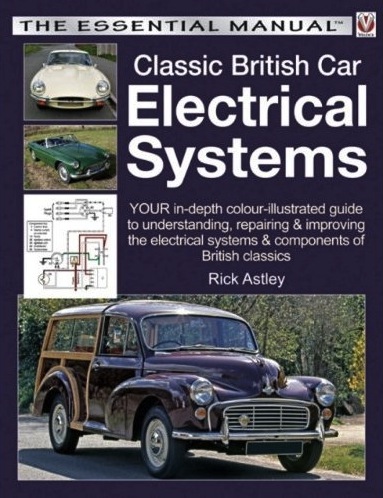 “The Italians invented rust (—and licensed it to the Germans)!”

“Why do the British drink warm beer? Because Lucas built the fridges!”

These are examples of a belief that has become firmly entrenched in the old-car world and passed down through the generations uttered, with brows furrowed, in voices filled with conviction. Deserved or not, the collective weight of this inherited “wisdom” may keep an otherwise perfectly capable car owner from approaching the subject sans prejudice.

Author Rick Astley does address this right up front, in the foreword of his book. He explains the Lucas market dominance and relationship to Smiths, Ristes, and Autolite. What he doesn’t say outright—but perhaps should have—is that Lucas built to a client’s price point: a Lucas part in a Rolls-Royce is not identical to the one performing the same function that is in an Austin. Moreover, Rolls-Royce—foremost among automakers had a custom of building even the most trivial parts, such as the humble cotter pin, in-house rather than trusting an outside vendor—would not have bought Lucas and Smiths parts if they were fundamentally inferior.

Astley started working on cars before he even had a license to drive, thus coming to his subject not out of academic curiosity, but personal need: he had to keep his own old cars running as an impecunious young man in England. The academic dimension developed later, tangential to his training as an electrical engineer and working, for the last two decades, as an automotive applications manager in the US.

The extraordinarily detailed table of contents gives a first impression of the depth of the book. And at the end, the index is, later, similarly detailed and well done. In between, the focus is on Lucas, Smiths, and SU parts on 1950-80 cars. Introductory chapters deal with basic electrical theory, current, pathways, and electrical connections. Following are several chapters dedicated to main systems (charging, starting, ignition etc) and pages are richly illustrated with colored drawings, diagrams, tables, and close-up (some exploded for ease in viewing the detail) photos of components, all with informative captions. Very useful are things like wire-size and -color charts, and a table for calculating electrical values if at least 2 out of 4 are known. The text is well cross-referenced and interspersed with real-life examples (“I turn on the lights and the engine fires!?”) as well as troubleshooting guides. Not only are repair procedures spelled out, but also tips given for improving/upgrading those components especially where more technologically advanced or safer solutions exist nowadays (lights for instance).

Astley’s writing is clear and easy to follow. Other than common-sense safety awareness and basic workshop/tool skills, no specific prerequisites are called for. On the last two pages, however, the same figure number is used twice (Figure 18.1) which causes the text references to the diagrams to be out of sync. The attentive reader will quickly figure this out.

And an afterthought just for MGB owners: A motivated Astley, himself an MG owner, has also written a book on the electrical systems of just that model.

Rewritten and adapted from a review first published in the November/December 2009 issue of The Flying Lady, the periodical of the Rolls-Royce Owners’ Club (RROC/USA).