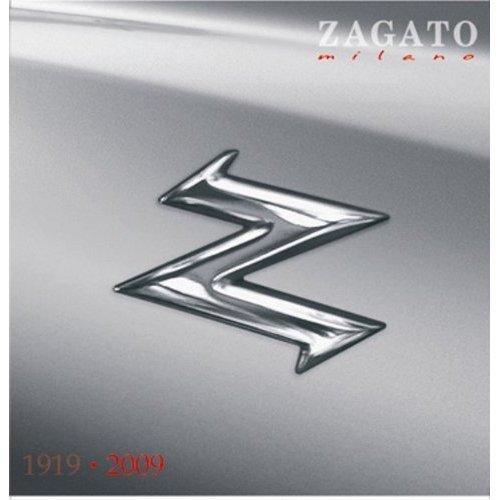 2009 was a big year for Italian coachbuilder and design atelier Zagato. The Milanese firm celebrated its 90th anniversary, had (once more) a special class at the Pebble Beach concours, and a few weeks later mourned the loss of Elio Zagato (1921-2009), son of the legendary company founder Ugo Zagato and head of the eponymous design studio. Another Milanese institution, the publishing house of Giorgio Nada, commemorated the anniversary by adding yet another book to its already considerable list of Zagato titles.

This book does not come right out and say what it is. Neither do the press release or the advertising copy. If you know of Nada’s other Zagato books (for example Zagato: Seventy Years in the Fast Lane, Zagato 1919-2000, Elio Zagato – Storie di corse e non solo) you would assume this new one to be along the lines of those others. It isn’t. It lists no author, a first clue. It does have an Introduzione but it says nothing about who wrote it or why, and only talks about the greater glory of the city of Milan (as does most of the entire first chapter). This is a book a Chamber of Commerce would love to bring out if it had the money! In fact, the reason for drawing so much attention to the city’s industrial and cultural accomplishments probably has to do with the 2015 World Expo that will be hosted by—Milan.

The Impressum page discloses, in small type, that Andrea Zagato, son of the aforementioned Elio, is one of two people credited with the Testi (text). The other is Zagato’s marketing and communications director, Paolo Di Taranto. (The book lists no job titles, only names.) And Andrea’s wife Marella (a niece, incidentally, of Renzo Rivolta of ISO Rivolta fame), who comes from an advertising background, art-directed the book. At the bottom of the page is a blurb—the smoking gun as it were—in which Nada expresses its pleasure at “assisting” its friends at Zagato in producing this book “which was devised and created completely within Zagato’s walls.” So, there it is: this is a promotional book, by Zagato about Zagato. Nothing wrong with that as long as you weren’t expecting a learned, critical, independent appraisal of the firm or its creations.

“In-house” does mean molto lira and, clearly, the book cuts no corners in terms of paper, binding, design, and typesetting. “In-house” might also have meant a level of access to material not ordinarily available to outsiders, but that does not seem to be the case. Everything here has been seen before, with the possible exception of the many really excellent color scale drawings of cars (and three airplanes) in profile. These are attributed to Norihiko Harada and Marco Pedracini whose names we recognize as Zagato designers, Harada being the Chief Designer.

The book is divided into decades. The presentation follows the same pattern for most decades: a full-page archival photo followed by a one-page summary of highlights; a car feature; three car illustrations; three mini-bios of noteworthy company people or drivers of that decade; three more drawings; a full-page period ad; a collage of random, uncaptioned photos; and a full-page beauty shot.

The exceptions are the first and last decades. The former is dispensed with on four pages that talk about aircraft, and the latter comprises nine contemporary-car features and three of marque (Lancia, Ferrari, Porsche) anniversaries. This is followed by a few words and photos describing the work of the atelier and seven spreads of the major marques that sported Zagato bodies, with seven more about the racing teams that ran Zagato-bodied cars. Preceding four pages of magazine and book covers is a final section depicting 38 cars described as “collectibles” with their basic specs, price then/now, and production numbers. Considering that, for instance, the 1926 price of an Alfa Romeo 6C 1500 SS is listed as “30 Euros” one assumes that this is the period price converted from Lire into Euros but unadjusted for inflation. In other words, meaningless data, especially when juxtaposed with a current price of 1.5 million Euros.

Throughout, photo captions are sparse, if there are any at all, and rarely contain more than the model name. The book is in Italian and English, side by side, but the English translation is only of the main text and skips items such as chapter titles or specs. With a bit of imagination it’s easy enough to decipher them. The English text reads well enough, but was most certainly not done by a native speaker. And, there is no Index.