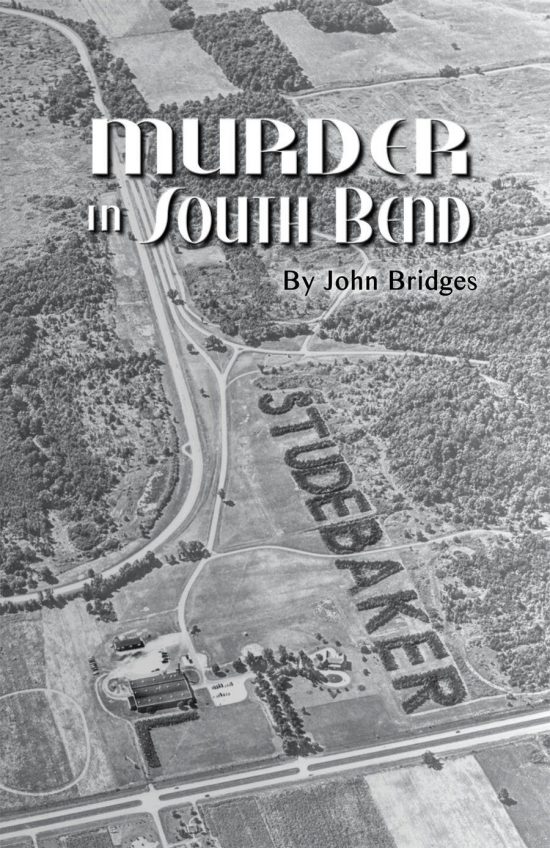 It began with a phone call from a friend letting me know a copy of a book he’d just read—had thoroughly enjoyed and found to be such entertaining and compellingly written that he found it difficult to set aside. He started to tell me a bit about the book’s story but then stopped, adding “I don’t want to give anything away.” And then, “A copy is on its way to you.”

One look at the cover—that wonderful photograph of the cultivated trees spelling out Studebaker on that company’s Proving Ground back in the day—coupled with the title, Murder in South Bend, was enough to start me reading.

It is not a new book as it was published in 2016. It’s fiction, but fiction interlaced with people, places and events of history so categorized historical fiction. As I discovered the story also has elements of alchemy and even a bit of science fiction to it. And, yes, there’s romance and intrigue too. It’s the creation of the engaged and inquiring mind of car enthusiast-restorer, patent-holding industrial designer, inventor, engineer, and author John A. Bridges.

Here’s the précis, but with a warning: it’ll stop short to avoid being, or becoming, “the spoiler”!

The story commences in Europe during the waning days of WW II. A young engineer in Germany manages to flee to America by attaching himself to Dr. Wernher von Braun’s group of rocket scientists. He works for a short time as part of the rocket development program, but really wants to be part of the auto industry and create a “people’s car” in and for America. So, Bridges devises and writes a series of events that take the young engineer-protagonist to South Bend where he lands a job at Studebaker. His first day of his new job conducting time studies just happens to coincide with the production line commencing assembly of the 1947 models.

A few months later he’s transferred to another job in another building. Now he’s assigned to that longed for, dreamed of work helping develop a practical, affordable four-passenger compact. And the building where that work is being done is on Studebaker’s Proving Ground. Meantime, his time studies work has gotten him crosswise with the labor unions due to his study’s findings that Studebaker’s high production costs were directly related to labor and its union’s collective bargaining actions. And, he’s become involved in solving a murder!

Progress developing the new car reaches the prototype stage. Her working name is Freda and, once built, she amazes company officials so a team is called in to proceed identifying the production design details.

The protagonist’s work site changes briefly back to his native Germany where he’s employed for a time by Volkswagen and, once again, gets involved in solving a murder! But he’s soon back at Studebaker and reunited with Freda.

And the rest you must discover for yourself. You’ll note so far there’s been no mention of the alchemy or sci-fi elements and only veiled hints at the intrigue. As the story continues to unfold it clearly demonstrates the agility and creativity of author John Bridges’ mind.

It is too bad that no one caught and corrected the few misspells and typos, although one is actually rather humorous. This one is on page 266, less than thirty pages from the book’s conclusion. Community stalwarts are referred to as “pillows of the community” rather than the correct pillars. That said, the few misspells do not detract from the reading enjoyment offered by the pages of this fast-paced and thoroughly entertaining novel, Murder in South Bend.

Posted Under: Automobiles, Fiction, US | Author: Helen Hutchings | No comments yet