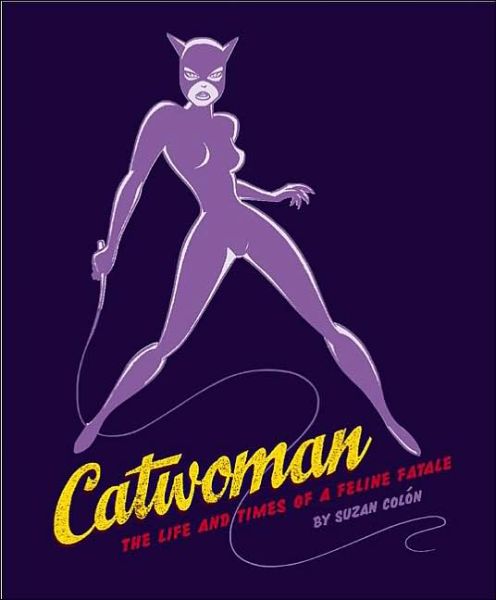 The look and tactility of this book are very pleasing, very satisfying. Glossy black, the obverse of the sturdy cover has a stylized Catwoman in purple cowl and bodysuit, brandishing her signature whip, and this image is rendered in a contrasting matte finish. Sprinkled in cinnamon, set in script, the yellow title, along with the orange and matching purple for the subtitle and author, contrasts boldly and offers a high visual impact.

The reverse, with a somewhat older version of the Feline Felon, quite sexy in her short, flaring skirt and ankle boots, has the blurb in red, comic-book font. The spine also uses the yellow font for the main title with orange for the subtitle and purple for the author. The endpapers show enlarged comic book images, and this motif never loses its attraction. Inside pages are thick and glossy, and, like the cover, are smartly rounded at the corners. The Table of Content shows Catwoman diving and cavorting in black silhouette against a deep red background.

The first part of the book traces the history of the Mistress of Malevolence from her first appearance in Batman #1, 1940, on through to the 2000s. Initially she was but one more villain to vex The Batman. She was introduced then as The Cat. (Batman #1 was not the first appearance of The Batman; he debuted in Detective Comics #27, 1939.) Her history naturally centers on the various Batman-related comic book publications, but the TV show and the Batman movies also appear. Michelle Pfeiffer, in the 1992 film, Batman Returns, looks great in her stitched leather suit, 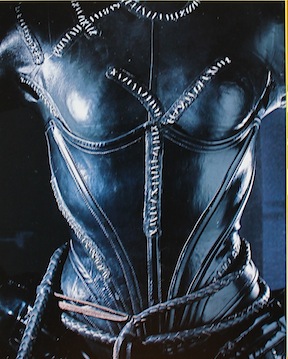 and we are told that her Selina Kyle, Catwoman’s alter-ego, is “gorgeous . . . unbalanced and vengeful.” We find that throughout the decades, Kyle’s backstory shifted from an airline stewardess to a “bored socialite” to a prostitute, and, with postmodern flexibility, her very name was inconsistent. (This book was published in 2003 and therefore did not include the 2004 film Catwoman starring Halle Barry, which, to confuse matters even more, has nothing at all to do with the several continuities of the Batman universe.) These chapters, using screen stills, comic book covers and comic book inside panels, are likeable enough graphically, but not as much as the succeeding chapters where the graphics and layout, again relying heavily on comic book art, are more dramatically staged, bolder, and even more appealing.

These later chapters cover “Feline Fashions,” “The Feline Brain,” “Hisses and Kisses,” and, despite the striking graphics, this is where the book goes wrong. Suzan Colón is a former senior editor of O, the Oprah Magazine. Her work has appeared in Good Housekeeping and Jane—also, although it seems out of character, in Rolling Stone and Harper’s Bazaar. Her memoir, titled Cherries in Winter: My Family’s Recipe for Hope in Hard Times, tells of her finding her nana’s recipes, making these with her Mom, and, through this homey endeavor, finding just how inspiring and resilient her family could be. Her What Would Wonder Woman Do? An Amazon’s Guide to the Working World, according to Amazon’s blurb (the bookseller, not the super hero), this book is a “hilarious and empowering handbook” to help young women “become a super hero in the office.” It offers advice on how to deal with tyrannical bosses, office romance, and other workplace obstacles. If all of this sounds treacly and twee, it is—and that is the problem with Catwoman too. Such homilies as “one of the reasons Selina Kyle became Catwoman was so she wouldn’t have to wear a boring corporate uniform” and “if a woman commands RESPECT, she can magically turn a man into a veritable pussycat”are presented alongside the artwork. Catwoman’s two “simple rules”for dealing with life are “I come first, and always keep the upper paw.” Bad cat puns are rife. 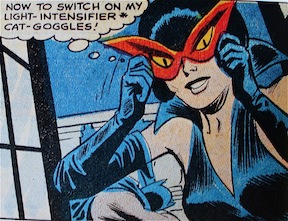 So who should buy this book and why? Comic fanboys will adore—and may become aroused by—the illustrations, but they will be put off by the overplayed feminine and feminist angle of much of it. Only a handful of comic fangirls exist. Mature women seeking practical advice in finding self-esteem or getting by in a man’s world would certainly seek elsewhere. Comic book scholars might use the book as a quick reference, but would most likely question the authority of the text and search for verification elsewhere. Why then do I, much more a comic enthusiast than scholar, keep returning to Catwoman? I find myself perusing it more than seems justified. The answer lies, I think, in the fact that this book, and perhaps similar books, can overcome the weight of its snarky inanity by the strength of its graphic design.

Posted Under: Fiction, Other Genres, Youth and Young Adult (YA) | Author: Bill Wolf | No comments yet