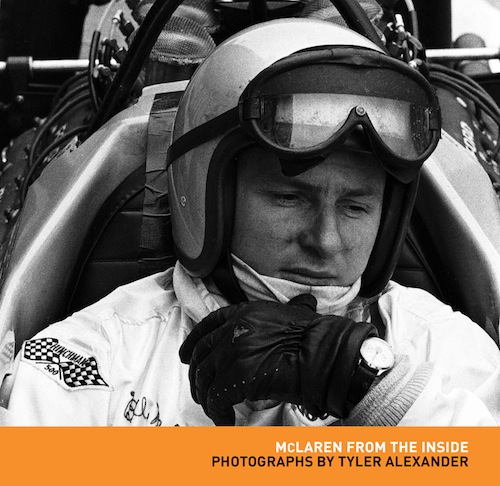 When you read this book you don’t get a clear sense just how big a role the author played at McLaren. He’s taken on as a hired wrench (1964) and a mere few sentences~six years later has risen to company director. He’s quick to point out that this distinction—if it was that—applied to the other folks who had joined up with him as well. There’s no table of contents, no index, no timeline. Whatever enlightenment is to be had has to be worked for by exhuming bits of data and context from the narrative. It is a fine narrative, augmented by splendid photos—actually, it’s the other way around—but the book does not make a good job of managing expectations. 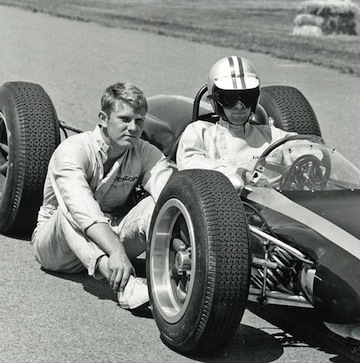 This book came out in 2013 but we were keeping our powder dry, postponing a review until it was clear whether or not the companion volume to this book would appear as planned in June 2014. Delays are common in the publishing world. That other book,  A Life and Times with McLaren, will be more of a biography and it seems so obvious that readers of the book that came out first, this here photo book, would gripe about it not containing enough background. That criticism could have been avoided simply by announcing in the photo book that a second book was already in the works. Instead, the only people who’d find out about it were the ones who spotted it in the publisher’s 2013 catalog, listed as a “follow-up.”

And then everything got complicated.

In February 2014, Tyler (73) was “taken unwell” with an unspecified illness that required hospitalization. In March it was disclosed he was recovering from a stroke and making good progress. Will that affect the June release? We’ll go ahead as if it will.

With a background in aerospace engineering and a knack for making racecars go faster, a chance encounter with Bruce Mclaren at Brand’s Hatch in 1963 led to Alexander becoming one of the original McLaren employees. Over time, the team fielded Can-Am, Indy, and F1 and F2 operations and he wore any number of hats. It is not too much to say he was Bruce McLaren’s confidant, and after Bruce’s death in 1970 while the team dominated Can-Am, Alexander assumed operational command, holding the team together and guiding it over the next 15 years. He was part owner when the team won the Indianapolis 500 in 1974 and 1976 with driver Johnny Rutherford. He left McLaren to run his own Indy car team but almost a decade later was induced to return to McLaren, by now a totally different outfit. Again he wore many hats, hence his catch-all job title: Special Products Manager, a position he held until retiring in 2009. 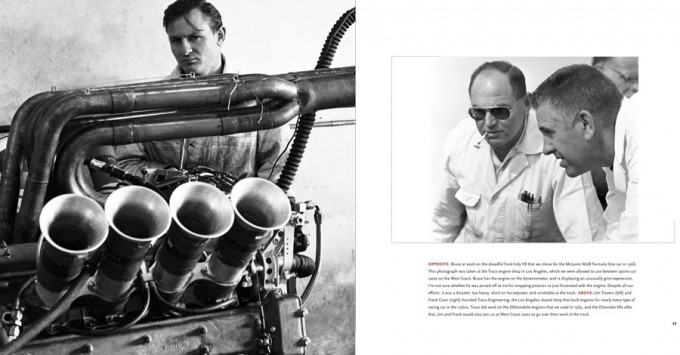 So, now you can appreciate that the photos offered here aren’t just snaps by someone who randomly wandered pit lane or that the commentary is that of a casual bystander. That he had time to photograph at all is remarkable but as he points out, the reason that some years are covered less than others is that his day job took precedence! This is important to know, lest the book being divided into two sections causes confusion. The first, the bulk of the book, is entitled “The Early Years, 1962–1974” whereas his actual McLaren years are 1964–82 and the second section (many fewer pages) is “The Return, 1999–2012” vs. 1990–2009 on McLaren payroll. Meaning, neither Alexander’s entire career nor his entire McLaren stints are covered completely. Only a fool would complain about this though. His access and his professional knowledge of people, cars, events etc. make for really good photos! 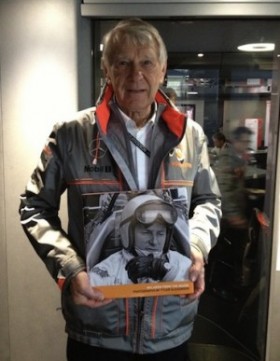 From engine builders like Traco (above right) to drivers like Senna to engineers like Adrian Newey and Ross Brawn—no matter what team or car or driver you’re interested in, or even what form of racing, chances are there’s a photo in here. This is a large book, 11 x 11″, and a good number of the photos are full-page, some even two. You’d never know that Alexander was “only” an amateur photographer; not all his shots are perfectly framed but even pros struggle on occasion for position.

It is a lovely thing to have this book. We echo the McLaren team’s sentiments: “Best wishes to McLaren legend Tyler Alexander, who’s in hospital at the moment. #GetWellSoonBuddy.”