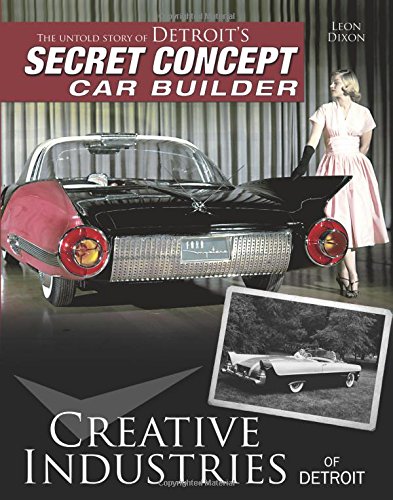 “But even if you never knew the name of Creative Industries, or have forgotten it, the cars and technologies it spawned were indeed unforgettable, and very likely you would know them.”

Some folks simply have a better command of the language and its nuances and for some that ability extends to writing as well.

On the pages of his history of Creative Industries of Detroit, Leon Dixon proves himself to be one with both of those capabilities. Couple that with his being equally serious about the accuracy of his writing of things historical as proven by the errata sheet he issued when publisher CarTech was unable the make all of the corrections he’d pointed out to them prior to the printing of this book (also available directly from the author at leeedy@aol.com).

Creative Industries began as an outgrowth of Progressive Welder Company founded by Frederick Johnson. Johnson was a welding wizard who created many industrial welding methods and machinery as he answered each call to overcome challenges especially during the war years. Once peace was finally declared, all of Detroit industry had to change gears and Progressive gradually morphed itself into Creative Industries, as it again answered and fulfilled challenges to create various innovative items including show cars and one-offs. Once the irrepressible, imaginative “Chrysler” Rex Augustus Terry came to Creative as general manager, the company knew no limitations.

Of course it wasn’t just these two men; each of Creative’s staff and employees were wizards at their particular craft. Many actually reported for work within another com- pany, embedded as we term it today. Just as much that Creative created was “secret,” most regular employees of whatever company that had an embedded Creative person working with and within their ranks never knew.

In one paragraph Dixon opines that, “Creative was a testament to the resourcefulness and genius that lived in Detroit’s manufacturing and automotive industry during its heyday. It was also a big part of how Detroit once put the entire world on wheels (when) millions of people made their living, one way or the other, from the grand experience that was the American automotive industry.”

Telling of the large number and wide variety of companies that reached out to Creative and describing many of the projects Creative either contributed to or created wholly did fill the 192 pages of this book. Dixon documents in words and over 400 photos projects that were publicly acknowledged and attributed to Creative and others where Creative’s role was never (until now) mentioned, much less acknowledged. Where documentation of a particular project was a bit thin but points toward Creative, Dixon is careful to so indicate. While automotive and truck manufacturers make up the majority of clients, there are others. Notable are Boeing and the marvelously innovative, inventive, and accomplished designer-engineer, Jim Bede.

Dixon writes of the Creative show car creations, the “raison d’être of these cars was to make us all dream. To imagine. To convert what if into reality. To add a dash of romance. Whether or not you like the styling in today’s realm, [they] accomplished exactly what [they were] intended to do.” A small sampling of some Creative concepts includes the Dodge-Grenada, Mercury XM-800, Packard Panther-Daytona, Ford’s FX-Atmos and Mystere. Cars that were production related included the El Moroccos which were constructed on Chevrolet chassis but styled to look like Cadillac’s Eldorado Brougham and the prototype DeLoreans.

Author Leon Dixon has captured the spirit and magic of the times as he tells the Creative Industries story because he lived them—they are his times too—and perhaps your times as well.

This review appears courtesy of the SAH in whose Journal No. 289 it was first printed.