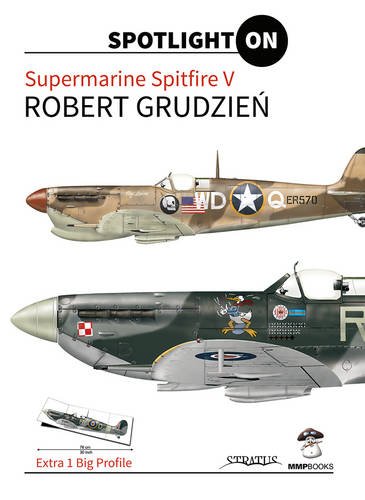 The Spit V turned into the most successful Spitfire ever, with some 6500 built, not bad for what started out as a stopgap measure—basically a Mark I with a beefier motor—after the RAF cancelled the Mark III due to production complications. The airframe of the V was in turn the basis for the IX . . . and what all this means is that the Spitfire story is convoluted when it comes to numbers, specs, and variants etc. The foregoing, and just a tad more, is all the text this book offers, barely a page, but that is exactly what this publisher’s “Spotlight ON” series aims to do.

This book, this series is all about color profiles of specific aircraft at specific moments in their lifecycle. Scale modelers have come to rely on this sort of book to venture into the world of customizing off-the-shelf kits but even the armchair aviation enthusiast will train his eye for nano detail here. To determine whether you could benefit from this book there’s a cruel but necessary test. Pull out the included (if ordered from the publisher) 1-sheet flyer that advertises 1/48 and 1/72 kit models by MMP Productions. The 14 drawings specifically state the Mark/variant and serial number, and often the operator or theater of operation: can you tell what makes one machine different from another? Granted, the 14 drawings are too small (2.5 x 3.25″) to determine, say, the shape of the rearview mirror or ice guards on carb intakes, but what about spinners (and, related, props), wings, rudders, fins? Armament, antennas? This book drills down to that level and does the same for camouflage and markings, not just calling out non-standard colors and markings but also unusual placement or size. Take just two examples, from the same aircraft (p. 8): “Note very uneven application and temporary chalked J-MC markings on black band. Standard national markings but fin flash applied higher.” and “Note a hole in cowling behind exhaust—left over after gun heating pipes and clipped wing removed.” If you can spot this sort of detail unaided, kudos.

Each page shows one aircraft in profile, mostly the left side, all in color. There are two top and bottom views and the occasional close-up of a specific detail. The captions state aircraft and often pilot identification, air action/location, and date. A few lines of text then describe particulars of equipment/configuration and markings. One floatplane is included, and several Tropical versions among which a real oddity, an unofficial two-seater modification.

And in regards to markings customizers can tackle British, Polish, US, Australian, Greek, Portuguese, French, Italian, Egyptian and Turkish schemes, and even a Russian and a Yugoslav version along with a captured Spit in German markings.

And let’s not forget that four-page fold-out, 30-inch-wide side view of S/N EN951, “probably the best-known Spitfire V in Polish markings.” These are neat books that take a lot of research and offer hard to find detail. That they are properly printed and bound makes their affordable price even more of a bargain.