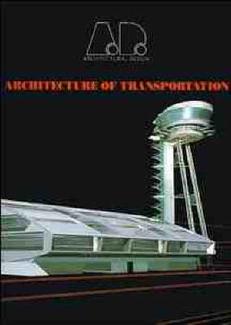 Planes, Trains, Automobiles—this book, magazine actually, explores how architects tackle the physical aspects of dispatching the unending flow of people and vehicles in a manner that is both functionally and esthetically satisfying.

Take a random example. Ever flown into Heathrow Airport? And changed to a domestic flight? Then you must have been in Pier 4A which sprouts off Terminal One and handles domestic flights as well as traffic to Ireland and the Channel Islands. Where once you had to hoof it from plane to terminal in the most uninspired of environments there is now serious architecture, courtesy of the UK architectural firm of Nicholas Grimshaw and Partners. Or if you took a train to the Continent you had to use the Waterloo International Terminal, another Grimshaw project. Last but not least, Grimshaw won the competition to build the new Rolls-Royce headquarters in Goodwood which has since won international acclaim for its environmentally friendly, and people-friendly, design.

The formidable design challenges Grimshaw faced on some of their projects are described in an essay that impresses upon us that nothing is as simple as the uninitiated is wont to assume.

The entire book is composed of similar essays that review in word and image the various architectural infrastructures made necessary by mass transportation. The scope is worldwide and ranges from Boston’s Rolling Bridge to the Bilbao Metro Railway. Additional editorials and essays address aspects such as what one might call the psychological disposition of homo itenerans aka man on the move. Examined are the loss of time and productivity caused by a “state of being neither here nor there”, preservation, the different historic and emotional “weight” of train stations and harbors compared to that of airports and the correspondingly different challenges to an architecture that is sensitive to such finer points. Particular insights into the latter are offered in the essay “Travelling Architects.” Along the lines of the motto “Practice what you preach,” here architects who happen to be traveling reveal their responses to transport interchanges (lounges, waiting rooms, lobbies, terminals) as they encounter them firsthand, as users not designers.

The book is richly illustrated with photos and drawings. By opening our eyes to things one is otherwise inclined to take for granted this book extends beyond its obvious and immediate appeal to engineers or transportation planners.

Military Low-Flying in the UK: The Skill of Pilots and Photographers »
« Fast Car Physics