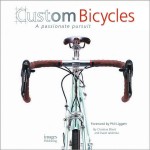 If you have never had the pleasure of picking up a full-size bicycle with literally one finger, or ridden one at over 100 mph you just don’t know how far bicycle-building has come in the 150 years of its recorded history.

Excellent photos of things you won’t have seen before—because they’re Down Under, Australia that is. Anyone with a mechanical bend will get weak knees.

A beautifully illustrated look at the development of the racing bicycle in the form of individual features of leading manufacturers and several landmark bikes.

The bikes and components Cino Cinelli began manufacturing in the 1940s were innovative and supremely well made, and some achieved cult status. They’re still being made, and to even higher standards—but have you heard of them?

Whether you want to upgrade or start from scratch—or just want to know what the various bits do—this book explains the inner workings of seven key components.

Winning one Tour de France is hard, winning two harder. Doing it ten years apart is harder still and the book’s protagonist is the only one to have done it. But—trust the title—there’s a lot more to this story.

The evolution of board, road, mountain, and touring competition bikes told in excellent photos and thorough text.

Toaster. Wristwatch. Eggbeater. Bicycle. Any number of devices play essential roles in our daily lives and yet are so ubiquitous that we often enough no longer marvel at their operating principles, purposefulness, and the realization that once they didn’t exist—and then they did.

Three years after giving us The Golden Age of Handbuilt Bicycles, the same author and photographer have teamed up to present a similar opus on hand-built special-purpose bicycles from 1880 to 1994.

Bicyclists will instantly relate the Bianchi name to famous professional racing and mountain bikes. Artists may remember that Picasso had a Bianchi bicycle in his studio and thought of it as “one of the most beautiful sculptures in the history of art.”