The Definitive History of Ideal Jawa and Yezdi 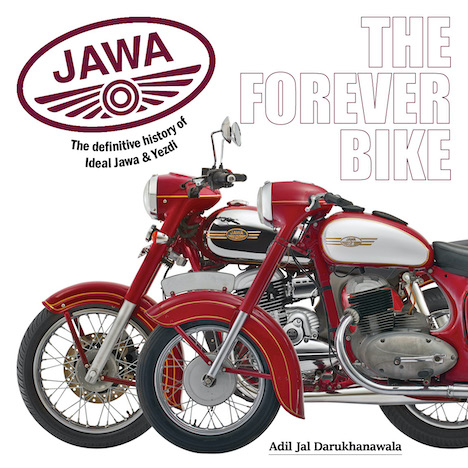 “The one aspect which had always befuddled me no end was that there has never been a single book of consequence written in English on the history of Jawa motorcycles. As such getting to know more about the brand, in detail, was a big challenge. Also just like Ideal Jawa had gone off the face of the earth, Jawa in the Czech Republic had also gone through trying times so the official archives were scattered and not possible to access even in its homeland.”

The very name JAWA hints at the firm’s origins—JA for a Czech fellow, František Janeček (1878–1941), and WA for the German company Wanderer whose motorcycle division he acquired in 1929. In its heyday JAWA was one of the top motorcycle/moped manufacturers and exported its models into over 120 countries. The name may have faded, even gone entirely extinct in many of those markets but in India it is still strong. More precisely, it is again strong, after being dormant for some years. 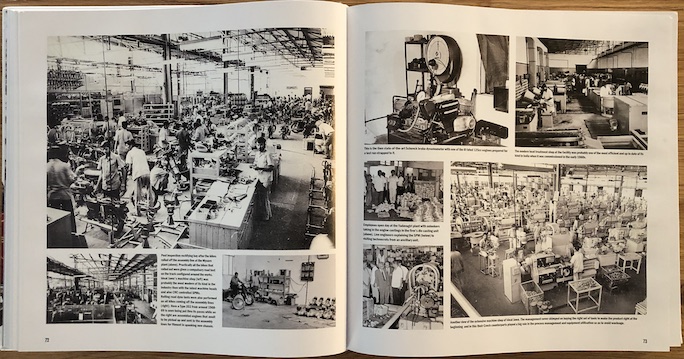 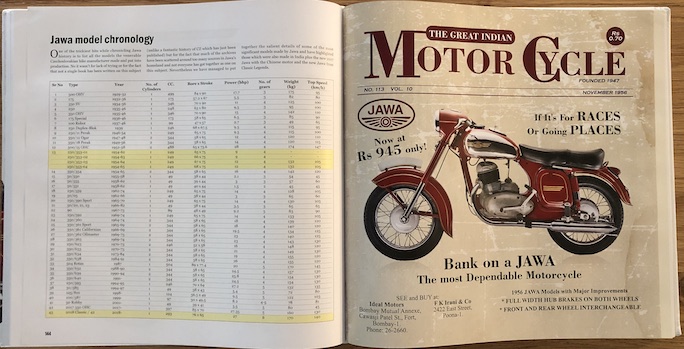 All of the above already points to a complex story. Once again author Darukhanawala—“the father of motoring journalism in India”—presents a topic that pretty much any Western audience would know about (Mercedes, VW, Jeep), possibly even at some expert level, but surely without having a full grasp of its relevance in or to foreign markets, in this case India. 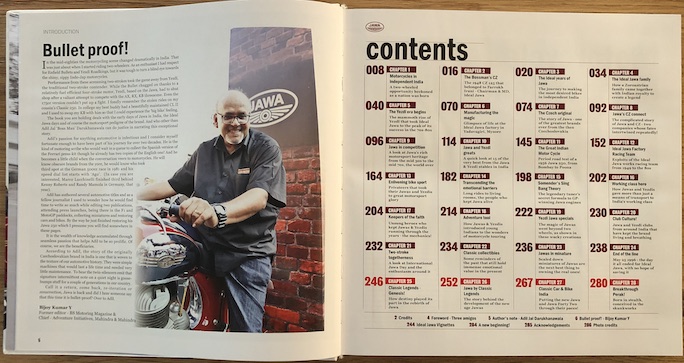 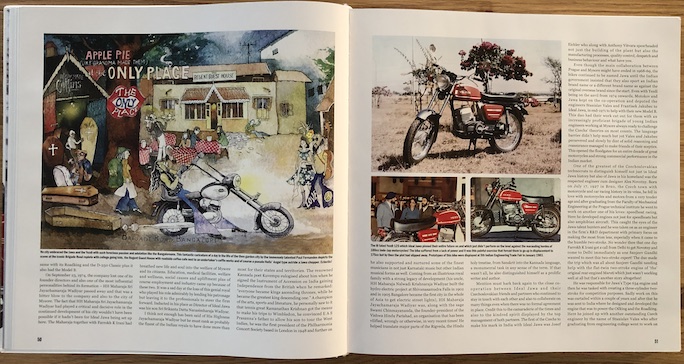 Apple pie, bell bottoms, a biker in a studded vest on a chopper—no, this is not California but Bangalore.

For the Indian readers at whom this book is principally directed (as evidenced by the liberal use of, say, colloquialisms and cultural references) the opposite may be true: they will know the domestic side but probably not the European origin story. Put another way, this book should find, and deserves a large audience. Pity, though, that the book will not be easy to source outside of India but Darukhanawala will ship anywhere (shipping by DHL is already included in the $90 price) and the books are well packed. 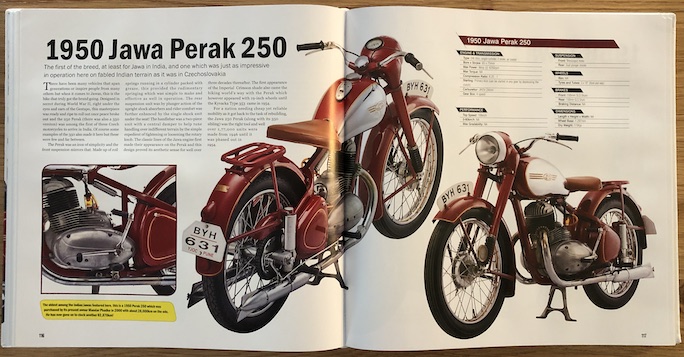 Motorcycles of that era, the 1950s, look similar enough no matter where they were made but the discerning eye will easily detect a British look in Jawas. And there’s a reason for that.

Considering the demographics and topography of India it is surprising to learn that, in terms of private transportation, it was the motorcar and not the motorcycle that established itself first. That imports should have preceded domestic manufacture is obvious enough but even that story is not so straightforward, and the bigger picture of world history comes into play here. Darukhanawala opens the book with the years following India’s independence (1947) and the resulting period of political unsettledness which prompted many a foreign dealer or importer to withdraw from that market. Enter two budding Indian industrialists taking meetings, and not only with Jawa, in Europe. Already at this early stage in the book you can see it lives up to its subtitle: The Definitive History. 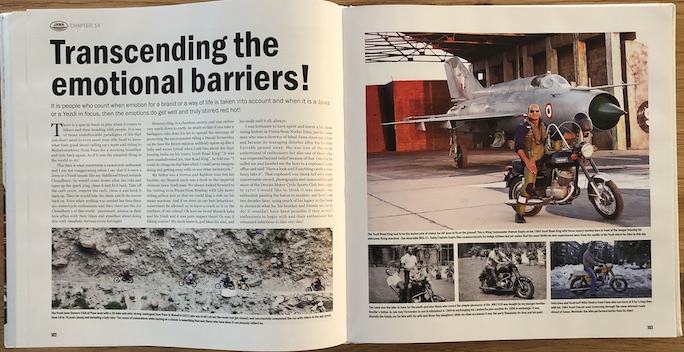 He traded his “office”—a MiG 21—for the cockpit of a commercial airliner but this Wing Commander still rides his Yezdi Road King.

From the assembly lines in Mysore (also photos of the Czech factory) to advertising, from road tests to racing, from technical specs to production minutia, it’s all here, even a look at other Jawa products such as powered gliders, railroad trolleys and boats, and a quick recap of a 1979 India-Europe roundtrip of 20,000 km in 100 days—on a budget of $5 a rider a day! Fifteen of the most popular models are presented in especial detail.

The tone is, for lack of a better word, conversational, sometimes with a thinking-out-loud flavor. Partly this is because the motorcycling community is just that, a community, and party because the author is such a fixture in it. Recalling the introductory quote, that is also the reason the book came together at all: an effort by many hands to scrape together bits of historical material and let one man sort it all out. That items such as the official company register and minutes materialized gives the book a firm grounding in fact. Reading the Acknowledgements page is like a Who’s Who in the motorcycling scene, and not just in India. It surely helped that the author lives in the city of Pune, “the motorcycling capital of India,” and that he owns a Jawa he restored himself. 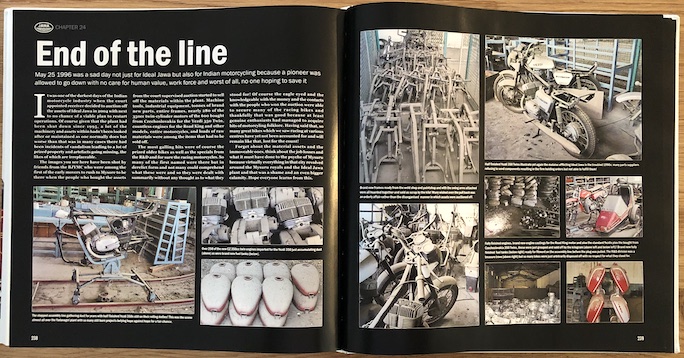 Fittingly, the pages covering the end of Jawa production in India have a black background. The lights were turned off in 1995 and it wasn’t until 2004 that the surviving assets were sold at auction and into an uncertain future.

So often books leave something on the table, or the cutting room floor but it’s hard to think of anything missing here. At 286 pages and a 12 x 12″ format this is hardly a small book but it feels like a much bigger one, which is a good thing.

The Definitive History of Ideal Jawa and Yezdi

The Michael Turner Collection »
« Now I Get It! Every Driver’s Handbook