A Century of Diminutive Automotive Oddities 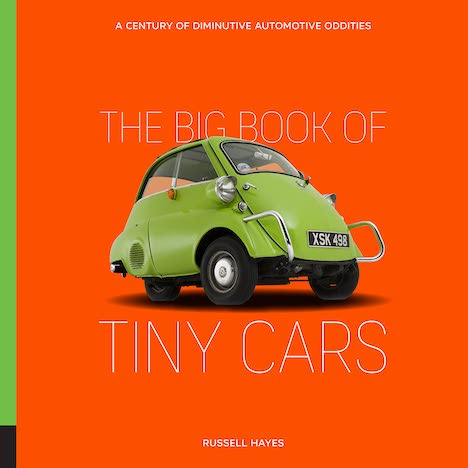 Spotting a factual error in the very first chapter/entry of a book is always disconcerting and concerning. But that was your commentator’s experience with the very first entry of The Big Book of TINY CARS. Author Russell Hayes chose to open with Oldsmobile’s 1901 Curved Dash based upon its debut date, wheelbase, and other tiny facts as enumerated in the “Tiny Fact Box” on the page. Then, in the text, he wrote that “. . . this was the first mass-produced car before the Model T Ford.”

The reality is Benz was the first to employ mass production 1894 to 1901 in making its Velocipede. If Olds wished to claim a first for itself it is necessary to add the qualifying words “in the Americas.”

As reading proceeded, the book proved delightful and edifying as the detailed bibliography linked to each vehicle proved my initial concern with the Olds, which had not had a bibliographic reference, unfounded. There is much to delight and please on this book’s pages with these 104 little charmers originating all over the globe that are profiled chronologically by year that production commenced. Each profile is accompanied by “tiny trivia” bubbles and a “Tiny Fact Box” of statistics. 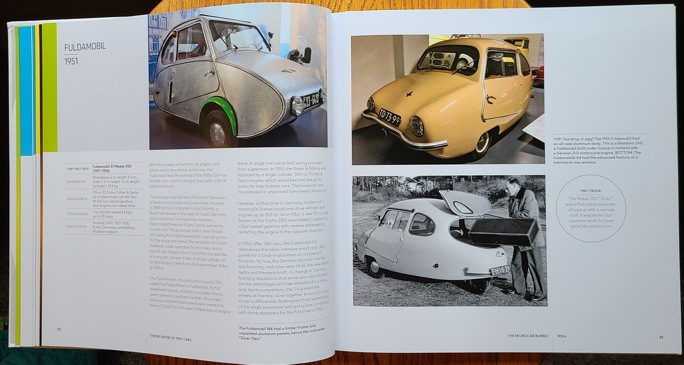 The 1950s Fuldamobil took its name from the town in Germany where it was produced. On left is a Type N. You can readily see why it was dubbed the “Silver Flea”. Top right is a Bambino 200 built under license in Holland and below is an S4 showing its hatchback feature. 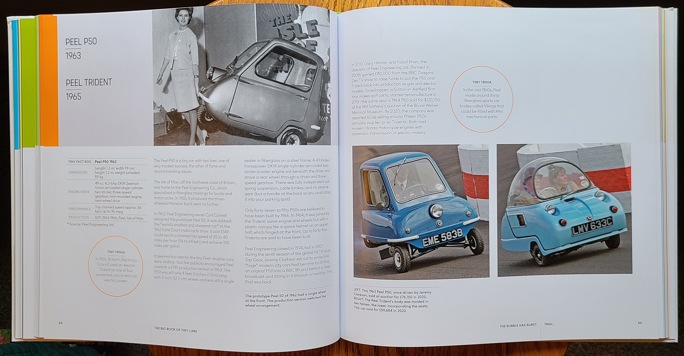 With very few Peels made on the Isle of Man during the mid-60s it’s not as surprising to learn that two P50s, shown in image on far left and lower middle, pulled down really big sale numbers at auction, one in 2013 and another in 2020. Model on lower right is a Peel Trident.

Thankfully too the word “complete” is nowhere in evidence in title or subtitle as I noted at least one truly tiny car not included; the French-made Arolas produced 1976 into the 1990s with both three- and four-wheel models of which at least 15,000 units sold. Thus this Century of Diminutive Automotive Oddities is really more of a compendium of tiny cars many of which will likely be unfamiliar especially if not marketed in your country of residence. 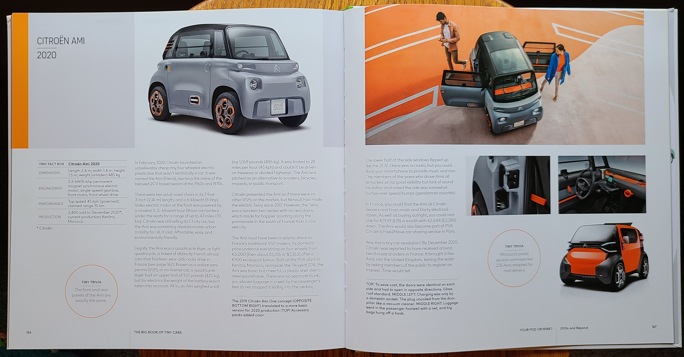 Citroën reportedly accepted well north of 2,500 orders for its electric-powered Ami shortly after its 2020 announcement and today is available in the UK and France in addition to Morocco where it is built. Ami is a cute two-passenger city car that charges only on household current.

As with his prior book, Volkswagen Beetles and Buses; Smaller and Smarter, Russell Hayes’ writing is clear and straightforward. And publisher Motorbooks, which credits Cindy Samargio Laun for the page design and layout, has presented Hayes’ work attractively in a slightly oversize format—obviously a tongue-in-cheek nod to it being about TINY CARS. 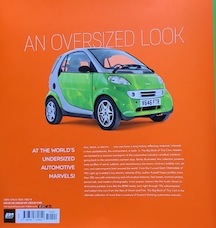 Images abound and each just oozes with personality. The dust jacket images differ from those on the physical book’s hardcovers. On the front is a ’50’s era BMW Isetta. On the interior pages telling of the Iso and BMW Isetta there is a Tiny Trivia bubble mentioning a brave and daring escape from East Germany to West but without details. Unfamiliar with the story, I did discover it—and so can you—at BMW.com/en. The back shows a newer by four decades MCC Smart City Coupe (right). The silver grey is the Smart’s safety cell, as its structure is called, with body panels of plastic that can easily be changed out if one tired of a particular color. 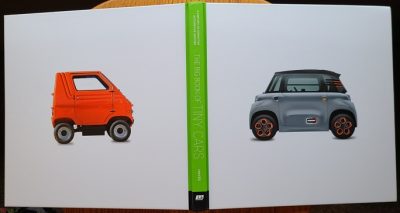 The book itself features end papers that are illustrated with no less than 46 of the micro, mini, supermini, bubble, tall tiny’s and pocket rockets. On the hardcover front is a 2020 Citroën Ami that, unfortunately, has never been available in the Americas. On the back of the book is a 1974 Zagato-bodied Zele, rebadged and sold in the US as an Elcar.

Whether you are a collector of these Tiny Cars or merely curious, seeking to learn more, this book offers much to enjoy.

A Century of Diminutive Automotive Oddities

Inside the Machine: An Engineer’s Tale of the Modern Automotive Industry  »
« Holy Halls: The Secret Vehicle Collection of Mercedes-Benz