Nothing “itsy-bitsy” about this Spider, or its newer incarnation Big Spider. Following Wasps and Gnats it was made by British Cyclecar maker GN. Looking more agricultural machinery than sporting car it routinely embarrassed bigger cars and set hillclimb records in the 1920s. This is the story.

It’s all in the name: preselecting allows you to call up the next gear, usually with the transmission remaining in the current gear until you press the “gear change pedal,” thereby obviating the need to master timing clutch to shift lever. It’s complicated. This book explains all.

KG, GCB, CBE, DSO, LVO, DFC, AFC, MA—this letter salad bespeaks a highly decorated life. It is only fitting that a biography of this distinguished officer should appear during the RAF’s Centenary year.

Not Much of an Engineer, An Autobiography

Gravely ill, this highly acclaimed aero engine engineer managed to stay alive just long enough to finish his autobiography. A modest man, he would have been embarrassed by the praise his eulogists bestowed on him.

This is a book for an unhurried moment when you have the time to roll words around in your head. If your interest is motorsports and the people and places that give it color, all the better but that’s not all you’ll find here. 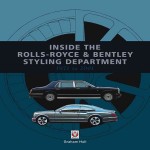 If your motor requires high octane fuel it probably has high compression. Banks is the man who championed this technology—and a thousand other things—which is probably why he had no time to keep a diary. He was 80 when he wrote this book, and still working!

Ferry pilots deliver planes—military, civilian, private. It’s an interesting career or sideline, even today, and a great way to build flight time and get your hands on the controls of many different types.