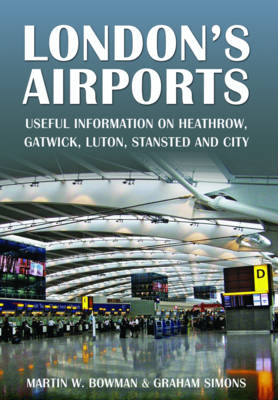 London, the capital city of England and the United Kingdom, has been a major settlement for two millennia. While hard numbers constantly change, modern-day London did and may still lay claim to the largest GDP in Europe and the most international visitors of any city anywhere. And easily 100 of Europe’s 500 largest companies are headquartered here. One thing that will not change any time soon is that it is home to four World Heritage Sites. And, of course, the 30th Olympiad will be held here, in 2012. Ergo, travel to Londinium—a name of uncertain origin—is a topic worthy of exploration.

This pocketsize book (5.75 x 8.25”) is your guide to the history and goings-on at the five major civilian airports in use currently. While the book dispenses some overall history it does not specifically talk about the original “Air Port of London,” a post-WW I amalgamation of two airfields south of London opened in 1920, Croydon Airport. After playing a key role as a Battle of Britain airfield it was returned to civilian use in 1946—only to have Heathrow being designated as London’s official airport.

Both authors are aviation historians and have delved into airfield history before, Simons specifically into London’s and Bowman into UK fields in general. Bowman also has a stack of aviation books, mostly military, to his name and Simons published a nice history of the de Havilland Mosquito.

Despite what the order of the airports in the subtitle indicates, Gatwick is covered here before Heathrow. It is not clear why; it is older than Heathrow but handles only half the passenger volume. By that yardstick, Luton (smaller) preceding Stanstead (larger by 100%) would be similarly out of step. No matter. Or does it? One the one hand the book says it aims at the “aviation enthusiast and plane spotter” and on the other the “day to day passenger.” The latter, surely, would want to be given criteria by which to decide which airport to choose—which airlines serve which airport, record of flight delays, best/worst travel day of week and time of day, number of lost-baggage claims etc. None of this data is provided; some of it may be found in the quarterly reports by the UK Civil Aviation Authority. What the book does quite well for the actual traveler is provide specifics as to ground transportation (including travel times and distances), gates, security, parking and even shopping and restaurants.

To set the tone, the book begins with a virtual 747 jaunt from Gatwick to Denver and back as seen from the flight crew’s perspective, suitably accompanied by photos. From preflight to ground and cockpit procedures the reader is given the smallest of glimpses of what goes on behind the scenes. Another small chapter covers the history and operation of the National Air Traffic Control Services and then each airport is described in one chapter each, including a 1-page map that mainly shows the runways and parking (in other words don’t expect to find terminals let alone gates called out). The text addresses operational history, facilities and structures (cf. Gatwick’s circular terminal, the Beehive, even if the book fails to point out that it was the world’s first), usage patterns, future growth, and specific features (from length of runways to distance to car parks). Much of the travel-specific information, including websites and inter-airport connections, is conveniently summarized in a closing chapter.

The aforementioned “plane spotter” would do well to scale back their expectations. Not all the planes, not even the vintage ones, are identified in the photo captions. The photos are of necessity small since portability was surely a factor in the design of the book. No Index.