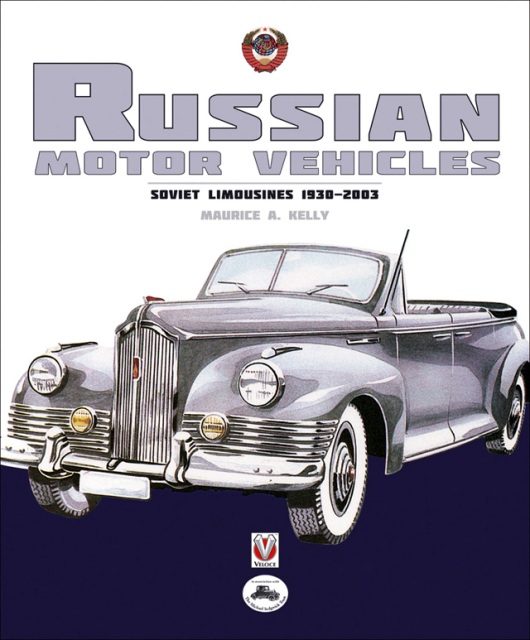 Maybe the production of this book was already too near its end to include a notice that it was only May 2010 that Russian President Dmitry Medvedev made it known that he desired to replace his Mercedes Benz state limousine with a proper domestic product. Not that there are any to choose from: ZiL, Russia’s longest-running and primary purveyor of such vehicles, sold its main plant in 2005 to settle old debts and is mainly in the truck business these days. This book, the first on this subject, looks at the history of special-purpose vehicles for Party and State use. It is Kelly’s second book about Russian vehicles and is similar to the first one (about the Czarist Period 1784 to 1917) in approach, detail, and design/presentation.

As if the subject of Soviet limousines isn’t esoteric enough, there’s even more exotica included here (which you wouldn’t know if you only saw the book’s sub-/title in a catalog): it covers a number of light trucks/utility vehicles, the most unusual ZIS101AS and 112S sports cars, and Russian-made or -influenced 1950s Chinese limousines.

For American readers especially, most everything in this book will be new. Except for the quite rare auction appearance, Soviet cars are rarely seen in living color here. But the cars themselves will look oddly familiar, derivative even, to anyone who knows American cars. The reason behind that is of course explained here but only in brief. Space does not permit Kelly the luxury of providing more than summary statements, several of which would be deserving of far more extensive treatment. Today’s younger reader who wants to better understand pre-Cold War US–Soviet interactions (resulting, for instance, in the 1920s in mass production of licensed Fordson tractors in the USSR and the deal to build a carbon copy of Ford’s Baton Rouge plant in Russia) would be well advised to look up more context elsewhere so as to better appreciate the complexity. Consider: when Comrade Stalin added a clause to the first 5-Year-Plan (1928–32) to commence limousine production as a matter of national prestige, the Soviets had to start from scratch. But how did they do it? Bolt-for-bolt reverse engineering, as they had done with the B-29 bomber? (A popular theory but Kelly doesn’t think so.) Stolen plans? Official Western help? After all, Soviet archives claim that none other than iconic designer Harley Earl had been retained as an adviser! (Kelly emphasizes that in his decades of research he has not yet discovered hard evidence for this.) However it happened, the first homegrown limo, the Leningrad L-1, was an American-infuenced hand-built Packard-flavored Buick Series 90.

Kelly is a former military engineer and now a technical author who writes about engineering and historical road transport subjects. He has had a long-standing interest in Russian vehicles and has developed extensive contacts. Much of the material shown here is thus drawn from primary sources and not generally widely seen. After the briefest of introductions he describes the manufacturers (Putilov, AMO, and Gorky) and their limousine-specific work in terms of technical detail, production processes, experimental cars, and special fittings (armor etc.). The quality of the original photographic source material is in some cases poor and there are limits to how much even modern technology can improve that. Still, better than nothing! There are quite a number of technical line art illustrations and coachwork and design drawings, some even in color.

If Russia was late to the game of building State cars, China was even later (1953) and it is only natural that they would look to their Russian friends to get them started. Some 30 pages are devoted to that enterprise before several Appendices present detailed specs, production figures, brief notes about logos, and a Bibliography that lists Chinese, Latvian, Russian, English, French, German, and Japanese sources. Model car enthusiasts will know that there exists a good number of nowadays highly collectable 1/43 models but none are shown here.

Given Kelly’s professional background in aviation and rocketry, and in view of Russia’s significant but often unrecognized pioneering efforts in these areas, it would be no surprise if his future books tackled those subjects.