If you see one you can’t fail to notice it—and admire it. Admit it. If you want to know the story behind it, this book will set you on the right path, and while the car may have been for the ultra rich the book is a paltry $40!

Go to a big-name vintage race and chances are you’ll see a T70 in action, one of the best-looking race cars of its time. Decades in the making, this book explains the success of the lithe British car with the brawny American motors.

Strictly speaking it’s not Jaguar Cars that is a hundred years old but the 1922 predecessor company. The early brand philosophy is still evident today, but one important virtue is not: that you get more car than you pay for. With Jaguar poised to move way, way upmarket everything in this book will make you wish you bought one sooner.

XKD 603 Through the Lens of Time

Every D-type is special—few were made and the one here is one of only six surviving long-noses. It was raced hard and successfully and 60-odd years later it’s not only still around but in largely original condition! A story worth reading, and in a rather spectacular book.

Not just any old E-Type but the one from the launch in 1961. It has survived and was gloriously restored—after gathering dust in a barn for two decades. Many hands have touched the car, many things have happened to it—and it’s all here.

There once was a time when modest Morris owned the largest-ever share of the British market. What happened? Lots of new material sheds light on the matter.

Morgans for a Lifetime: In Prose and Poetry

He’s raced Morgans and restored them, toured and traveled the world in them. Now he salutes and celebrates with prose and poetry the Morgans, in all their flavors, that have given him so much pleasure. 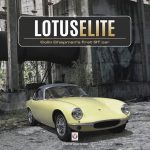 Some called it the best-looking car ever. The press lauded it. To break into the road car market Lotus kept the price so low they hardly made money on it. If you wanted it even cheaper, you could buy it as a kit. Still it took six years to sell just about a thousand. Sounds like a complex story.

Bond was involved with so much more than the 3-wheelers everyone associates with him. This expanded version of an older book offers even more detail and sheds light on the art and science of a small company building small vehicles.

Hardly the sexiest Rolls-Royces and Bentleys ever but for their buyers they were the only game in town at that segment of the market. Over their 20-year production run many modifications were made, not least the first-ever disappearing mascot.

You can still see this 1955 car being raced today, with abandon, and successfully. In its day it was the ultimate sports racer. Few have survived in this original a form which is why this is the one to which an entire book is devoted.