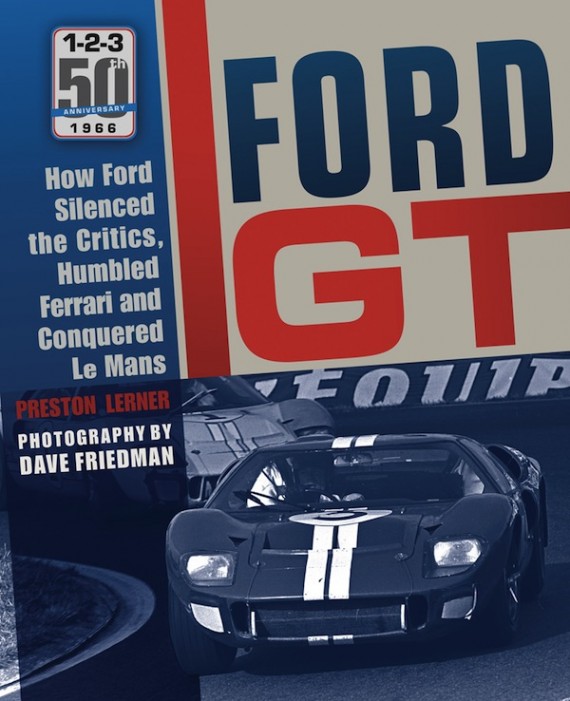 Next year is the 50th anniversary of Ford’s history-making Le Mans victory over Ferrari so it is to be expected that a new book should come out revisiting this epic story.

Considering the respective strengths of the two bylines (and the photo-friendly oversize format of 10.1 x 12.5″) an inevitable question arises: Is this predominantly a picture book with some nice text added? Or is it a good narrative of that now-fabled enterprise accompanied by some nice photographs? After closely reading the text by veteran automotive writer Preston Lerner and looking at the many fine photographs by renowned photographer Dave Friedman, who as Shelby American’s official lensman in the 1960s is responsible for virtually all the images found here, I would suggest that it is Lerner’s narrative that carries the weight because without the context it provides, Friedman’s wonderful photos, even with their very precise captions, would struggle to move the story forward. This sentence also hints at the answer to another question: does this book advance the story, is there anything new to be said?

Yes—the book deserves a spot on the bookshelf. This is in no small part due to the narrative that Lerner has crafted. If the photographs by Friedman that grace that pages seem familiar if not repetitive, they should, many having been used in various other books on this and related topics by Friedman such as Shelby GT40 (1995), Shelby American Racing History (1997), Remembering the Shelby Years, 1962–1969 (1998). That said, the photos certainly provide what might be the best such collection of images on the topic of the Ford assault on Le Mans.

Although relatively few will consider the book in this sense, it is an excellent addition to the historiography of the Ferrari-Ford battle for supremacy at Le Mans. This is reflected in Lerner’s remarks regarding the focus of the book, that it is “. . . a single narrative that encompasses the people, the politics, the technology, and the racing behind the factory-supported program that culminated in back-to-back wins at Le Mans in 1966 and 1967.” (p. 9) As Lerner states, the book is primarily concerned with the campaign launched by the Ford Motor Company to achieve victory at Le Mans, and the central question he poses is: How did Ford achieve its goal?

Thus, the book is not a model history of the Ford GT machines, something that Karl Ludvigsen in The Inside Story of the Fastest Fords: The Design and Development of the Ford GT Racing Cars (1971), Ronnie Spain in GT40: An Individual History and Race Record (1986 and subsequent revisions), Trevor Legate in Ford GT40: Production & Racing History, Individual Chassis Record (2001), The Ford That Beat Ferrari: A Racing History of the GT40 (2005), by John S. Allen, and, of course, Dave Friedman in Shelby GT40 (1995) have all addressed in various forms. Certainly, by necessity, Lerner does provide extensive detail regarding the actual cars that Ford fielded over the years 1964 to 1967, but they are elements of the narrative, not its subject. (Note, incidentally, that Lerner refers to them as “Ford GT” not “Ford GT40; explained on p. 29.)

Likewise, there are several other books that included the Ford-Ferrari tussles, one of the earliest being Ford: The Dust and the Glory; A Racing History (1968) by Leo Levine, joined that year by perhaps the first solely concerned with the topic, Ford Versus Ferrari: The Battle for Le Mans by Anthony Pritchard. But it wasn’t until Go Like Hell: Ford, Ferrari and Their Battle for Speed and Glory at Le Mans (2009) by A.J. Baime that the topic was given an entire book of its own. As highly readably and even entertaining as Go Like Hell might be, it should be Lerner’s Ford GT that one should be reaching for on the bookshelf. A recent re-reading of the Baime book reinforced and supported my original impressions, namely that reading that book is more akin to watching a soap opera than reading history. This view might be at odds with those racing fans who enjoyed Go Like Hell, but, then again, I am an automotive competition historian and not a racing fan.

That Lerner attempted to craft a narrative for what might be considered, for lack of a better term, “real history” is evident throughout. It is thoughtful and nuanced in its interpretations, the material gathered while conducting research marshalled so as to allow the reader to follow Lerner’s line of inquiry and thinking regarding several of the issues and controversies regarding Ford’s aims at Le Mans. While I generally begin groaning (often very loudly) and rolling my eyes when confronted with sidebars in books, Ford GT is one of the few times where I find they are employed in much the same way that scholars use footnotes to conduct their battles. One sidebar, “How Le Mans Was Won (and Lost) in 1966,” for instance, discusses how the finish of the 1966 race may have come about. It is quite well done and is one of the few treatments of this issue that manifest a reasoned, deliberate study of the factors involved, taking note of what was stated contemporaneously, and is not merely a rehash of memories the principals recalled many years later. It is difficult to take issue with Lerner’s interpretation of the many factors and problems involved in what proved to be a very messy and unsatisfactory conclusion to the race for Ford. It really is excellent work, something too often absent from books about racing’s past.

That Ford GT has an excellent Bibliography and that Lerner cites the material that he uses for his interpretations is praiseworthy; it should also encourage those wishing to be “auto racing historians” to literally take note, there being far more to writing the history of automotive competition history than merely writing about the past.

While it should be noted that Ford GT is scarcely without its flaws—which are few and far between—nor likely to be the last word on the topic of the Ford Motor Company’s campaign to achieve victory at 24 Hours of Le Mans, it must also be said that it will take quite an effort to best it.

An excellent book and highly recommended.