Jupiter’s Travels: Four Years Around the World on a Triumph 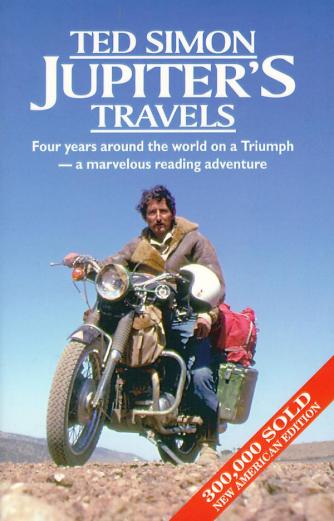 It takes a special kind of wanderlust to travel overland around the world. Even more so if it is 1973 and you’re traveling on a Triumph Tiger 100 motorcycle. The swansong played for the British motorcycle industry during the seventies and the idea that anyone would choose a Triumph for a globe-circling adventure seems today to be almost ludicrous. Yet Ted Simon rode around the world over the course of four years, traveling 78,000 miles, through 45 countries and became a motorcycling legend whose fame continues today.

Simon wrote Jupiter’s Travels in 1979 and it quickly became a cult classic. His was a story of raw adventure. His travels took him over mountains and through jungles, through wars and revolutions. He was thrown in prison and feted at palaces, finding friendship, mystery, and romance, before always returning to his bike and moving on.

His adventure began on October 6, 1973—an inauspicious start as it was the same day that the Egyptian High Command began an assault on Israel in what was to become known as the “Yom Kippur War.” The war lay directly in Simon’s path. It wouldn’t be the last time that his trip was rerouted because of conflict and political strife. Strangely, six months earlier when he had originally thought of traveling around the world by motorcycle, he neither owned a motorcycle nor had a license to operate one. His choice of the Triumph, rather than something more obvious like a BMW was made by his obtaining sponsorship from the London Sunday Times and its desire that a journey by an Englishman, starting in England and sponsored by a British newspaper, ought to be done on a British bike.

The 1970s were indeed a different time than today. Many of the remote places that Simon visited were less jaded and the people were less aware of the rest of the world. On the other hand, the sexual revolution was still on full song, a fact that is reinforced by Simon’s frequent and mutually useful relationships with young women he meets along the way. In the end, he makes a terrific narrator and helps the reader understand the joys and sorrows of his travels.

Ted Simon inspired scores of other motorcyclists to follow in his wheel tracks. Tattered copies of Jupiter’s Travels were passed from rider to rider, a sort of holy text of how to do it right. Fortunately, in 1996 a new edition of the book, self-published by the author was released and so it is now possible to read a copy of the book without greasy thumbprints and spilled coffee obscuring the text. If you ever thought about riding a motorcycle a long way and want to know what to expect, buy a copy of Jupiter’s Travels. The back cover carries this warning, which sums it all up: “Reader Beware: Because of this book men and women have been known to leave their jobs and take to the road. In fifteen years it has changed many lives. It could change yours.”