Lady’s Men: The Story of World War II’s Mystery Bomber and Her Crew 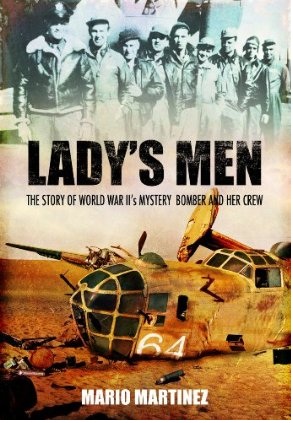 “Know Thyself” ( γνῶθι σεαυτόν ) is what it is inscribed over the entrance to the ancient Oracle of Delphi, meaning self-awareness guards against hubris. Applied to this book it means that the author is the first to know, and say, that his book is at odds, sometimes sharply so, with other accounts on certain vital points.

Even so, Martinez’s (a fundraising consultant with roots in documentary filmmaking) conclusions have never been seriously challenged by anyone.

The story revolves around the American B-24D Liberator bomber #4124301 “Lady Be Good” that simply vanished one night in the Libyan Desert in 1943 after its first and only combat mission. Neither plane nor crew were found until oil geologists 15 years later spotted the bomber from the air. The plane showed no sign of battle damage . . .

Regardless of what light future discoveries, if there ever are any, may shed on the matter, Martinez’s version of the event and his conjecture about that which cannot now be documented are presented in a plausible and compellingly told manner. Martinez has spent years researching war records and contemporary accounts and engaged in correspondence and conversations with relatives and comrades to pinpoint the cause/s of the crash and, more specifically, the last days of the nine-men rookie crew that had bailed out and whose remains were found years later many miles from the wreck.

In terms of human drama the story of their presumed march to safety and other attempts to survive the desert, even if it were entirely fictional and not based on a real event, would make a blockbuster movie. All there had been was the 1969 made-for-tv movie Sole Survivor (with Star Trek’s William Shatner no less) that was loosely based on LBG, and therein lies the genesis of this book. Martinez wrote a screenplay based on the one and only book on the subject (retired USAF Colonel Dennis McClendon’s Lady Be Good: Mystery Bomber of World War II, 1962 and updated 1982) and his own research. Completed in 1986, lack of financing (kind of ironic for a professional fundraiser!) sidelined the project for years until someone suggested in 1992 to turn the material into a—this—book, first published in 1995.

The screenplay approach is undeniably, and, if you think about it, inevitably present in the book. It is both its strength—an engaging dramatic story—and, some would argue, its weakness—conjecture taking the place of hard fact. But therein lies the rub: hard fact about many aspects of the mission and its demise is simply not extant and Martinez obviously has to speculate as to some of the what/when/where/how. Ergo the book is a dramatized reconstruction, a docudrama. His choice to use imagined dialogue in certain parts helps liven up the story, gives it dramatic arc and makes it relatable, but historians will roll their eyes. The dialogue and interpersonal dynamics are informed by his reading of recovered crew diaries and recollections of other people who knew crewmembers.

The 1959 expedition to the wreck did generate a lot of news coverage especially since there was no trace of the crew and survival gear and food stores were still on the plane. Martinez covers every aspect of the mission in good detail but many loose ends—must—remain: why did LBG abort its mission and drop its bombs in the water, why did the crew bail where they did, how did the plane after flying unmanned another 16 miles make a very decent belly landing all by itself, the radio calls between plane and base, compass/chart readings, the small fragment lodged inside one of the Pratt & Whitney engines of a 20 mm projectile that had done no discernible damage other than piercing a rocker box cover and clearly did not bring down the plane.

So, what you will get out of this book depends largely on what you expect of it. Well-told detective story of toil and fear, struggle and mystery: check. Answers to everything: not. For this reviewer, it is really the former that carries the day. To use big words, the story touches upon eternal themes of heroism and suffering, despair and camaraderie, the mindless cruelty of nature. There are several websites solely dedicated to LBG and you can find much, much minutia there.

If nothing else, Martinez puts all the pertinent information in one place and adds data and even clarification his predecessors lack. All his sources are listed; there is a Bibliography and a deep Index. Specific to this third edition is new information regarding the still missing S/Sgt. Vernon Moore. There are several maps and all the photos are bundled into one center section.

As if all of the mysteries surrounding LBG aren’t enough, consider that some sources (but not this book) say that certain parts of the mostly intact wreck were fitted to other planes—some of which then also crashed killing their crews (see, for instance, the US Army Quartermaster Foundation for such references).

The Magic of a Name: The Rolls-Royce Story, Part 1: The First Forty Years »
« Engine Revolutions: The Autobiography of Max Bentele