When all is said and done, the Beach Boys are the American band. This book explores in depth their recorded history.

From fun facts to technical minutia, the Beatles 1963–70 song catalog is put under the microscope by two music historians.

All you ever wanted to know about Martin Ukuleles—and then some. But done with painstaking research and panache. A very likable book.

Being an “original” usually comes at a price. Lauded by some, dismissed by others, misunderstood by most. Monk, dissonant in his music and his life, stayed true to his vision; this book explains how.

The author must be one of the few teens who knows exactly what he wants to do when he grows up. His elders (betters?) discouraged him; he stuck with it anyway—and so became a Stones insider.

Written by a musician and music writer—and Stones fan—this book takes a look at 50 iconic songs by an iconic band from an entirely unique perspective.

Each in its own way, the rapid rise and the long fall are emblematic of the life of the superstar who flies too close to the sun. The “Queen of Motown” lived only 49 years but helped define a new sound.

The music and car culture/s seem particularly and almost inevitably connected which is why this book gives us a look at twenty stars from the popular music world who are also car enthusiasts. 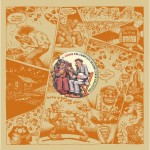 The creator of Fritz the Cat drew hundreds of record covers for both new artists and forgotten masters back to the 1920s. In the latter case, his cover art, in turn, served to revive interest in the music itself.

This original book about an original musician is partly biography and partly discography and looks at 14 major albums to examine the life of the “Evil Genius of Jazz.”