Mercedes 300 SL, Car of the Century 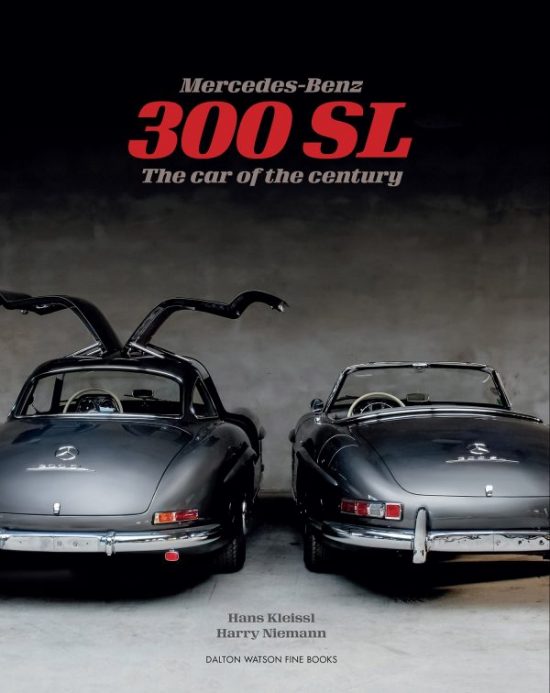 by Hans Kleissl and Harry Niemann

“This book should be different, with no detailed technical accounts of the production phases, but rather it should convey the feelings of life and emotions associated with ownership of the car.”

It’s probably unavoidable to want to start a review with this quote because it is not often that book authors state their intentions so clearly (and, in this case, quite accurately).

But something the book doesn’t state at all is that it is an English version of a German book first published by Motorbuch Verlag (ISBN 978-3613039605) some years ago. This is of interest only insofar as the English version lists as publisher Dalton Watson Fine Books. For the discerning bibliophile this rightly raises expectations. How well they are met depends on how well you do, for example, deciphering serif body copy in grey against a white (worse, sometimes black) background. On the upside, the translation is clearly done by someone who speaks properly good ‘Murrican, and this large and heavy book has a properly rounded spine. Yippieh. 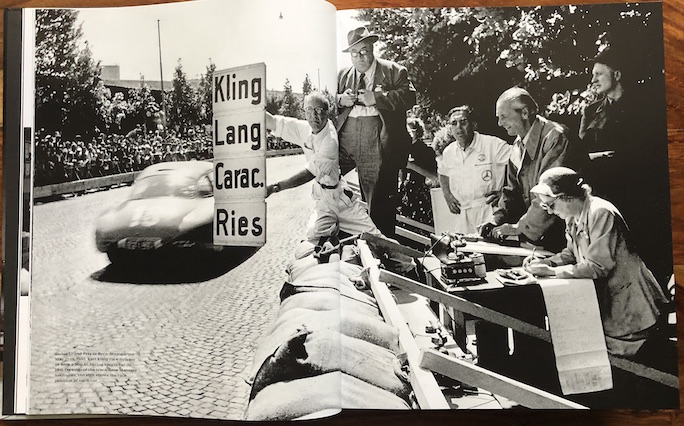 Unless you are in the habit of reading the often pointless blurbs on dust jackets you may miss the authors’ bios of whose credentials nothing is said elsewhere in the book. Even if you do spot them, know that they are barely adequate to establish just how high up on the totem pole these names belong. Devotees of the 300 SL will of course know that Hans Kleissl (b. 1952) is the “HK” in HK Engineering in Germany, that temple of all things 300 SL he opened in 1984. But you’d also have to know that he works out of an ancient former monastery to recognize that the “archive at the Polling monastery buildings” mentioned in passing in the Preface refers to his place. And unless you follow the comings and goings of each and every surviving 300 SL you may not realize that easily a third of them have passed through his shop! That he started his business because he couldn’t get expert help for his own 300 SL Roadster, bought in 1979, only underlines his commitment to providing competent service, be it ground-up restoration or service/maintenance. Long story short, if anyone can render nano detail comments on cars and discuss them in context, it is someone like him. 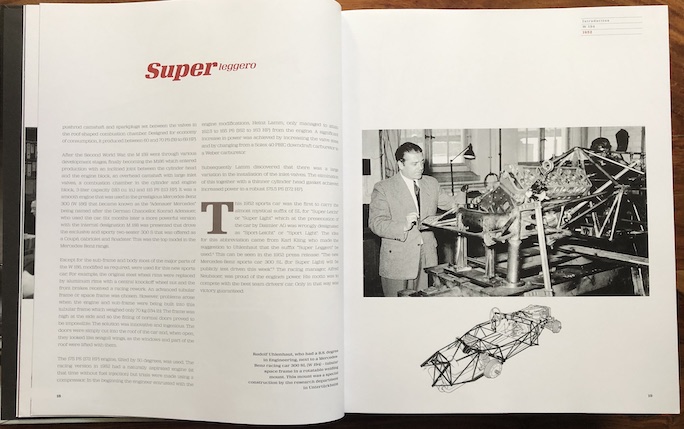 SL = Super Light, not Sports Light. M-B itself got confused about this usage.

Context on the macro level is provided ably by Harry Niemann (b. 1951), here wearing the hat  of former manager of the Mercedes-Benz AG Historical Archive and later Daimler AG’s Archive and the Historical Vehicles Collection. Among the stack of motoring history books he has written are several Cugnot winners, and while the book jacket alludes to his non-fiction work it says nothing about his excellent books about fine wristwatches or his academic work in the areas of history and natural sciences. (Many of these activities overlap—he must have more hours in his day than the rest of us!) 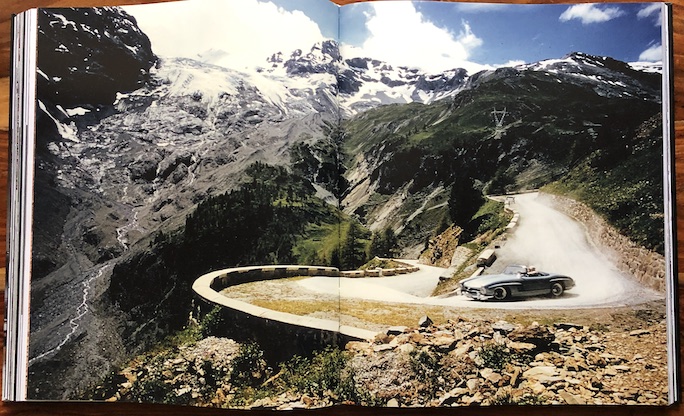 The magazine feature that goes with this evocative photo really stoked the 300 SL fire in the US. The American who wrote it and took the photos asked M-B for a Gullwing as payment in lieu of cash—and then piled 280,000 miles on. And then he kept it until he was 80 and gifted the car to the son of his friend of many years, Pablo Picasso. And then . . . “The Black Torpedo” survives to this day, unrestored.

To return to the opening quote, aside from brief references to technical bits were they are relevant to the broader story there really is no dry techno speak to be found. Production numbers, race results (both in period and then vintage racing 1997–2016), technical specs, modifications, and exterior/interior color combos (with M-B codes) are appended. New-car prices are mentioned which is always helpful but you’ll have to do your own legwork to equate them to purchasing power. The book is most suitably illustrated, with lots of period imagery (including design drawings and ads) and several modern images by big-name car photographers.

The early part of the book is straightforward enough and basically chronological, picking up the thread with the resumption of industrial activity in post-WW II Germany. There is a lot of useful background here for anyone with an interest in history in general: politics (both on the part of the Allies and also the German government), currency reform, resource allocation, export requirements, marketing choices, the role of motorsports. While all these factors have a generic application, it quickly becomes clear how and why Mercedes-Benz played its cards differently from, say, Opel or BMW, Audi, Volkswagen. That both authors are German helps of course to get the details right, not to mention German spellings. 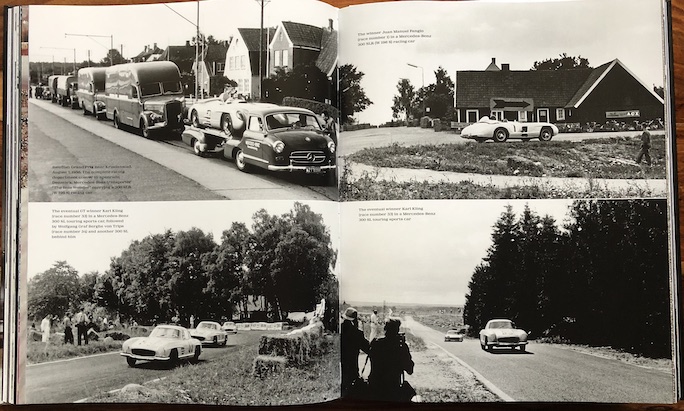 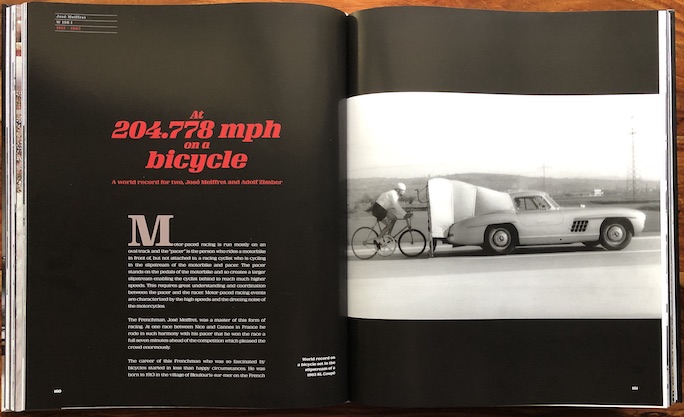 Ever heard of “Motor paced racing”?? Here you see a world record in progress: 204 km/h. On a bicycle. With wooden wheels. (The header says “mph” but that’s the wrong unit of measure!)

A quote from a period source (British, for what it’s worth) gives a useful clue as to the issues this book seeks to illuminate over the following 200-odd pages which are, inevitably, not as linear as the preceding ones:

“The Mercedes-Benz 300 SL is a frightening car. It scares me. It also convinces me that the opponents of German rearmament are right. This 300 SL is a science fiction novel, not a cheap dime-issue but a heavy, voluminous tome destined to be studied by General Staff. This car is beautiful in a terrifying, intimidating, threatening way, too massive, too refined, too powerful—absolutely Wagnerian. This big Mercedes is symbolic of the Germany tradition that one knows and fears.” 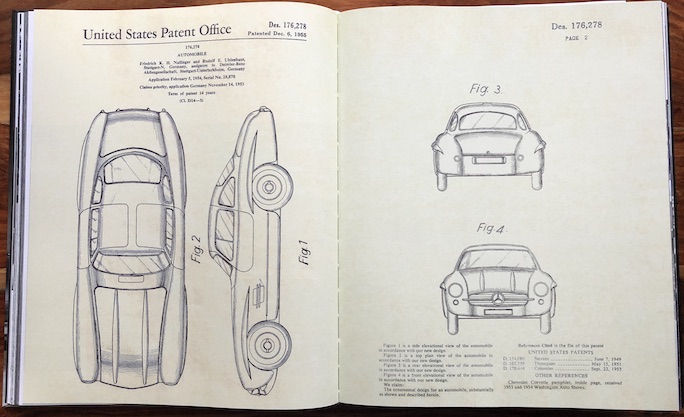 Who knew? The application for a US patent for “the ornamental design for an automobile, substantially as shown and described herein” references the 1953/54 Corvette.

Such ruminations notwithstanding, almost 80% of production went to the US alone. A car, certainly a statement car like the 300 SL, is not “just” a car: it is philosophy, worldview, ambassador. The book examines this from many different perspectives, mostly in the form of profiles of particularly storied cars or owners. As to the subtitle, it is probably a reference to an accolade the 300 SL actually won, with a slightly different name, in 1999: sports car of the century. 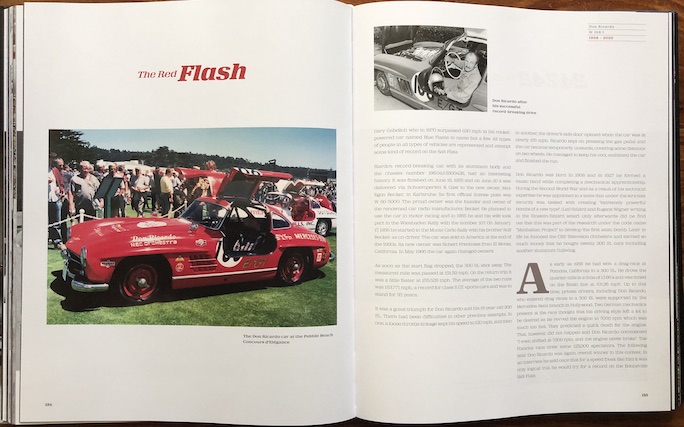 And who knew that there is serious money in band-leading (it says NBC Orchestra right on the car fender but the text says CBS): Don Ricardo made enough dough to assemble a significant car collection including twenty 300 SLs of which two were rare aluminum bodies. With one of them, a 16-year-old model, he set a class record at Bonneville that stood for 35 years!

The Preface singles out the 2014 concours at Germany’s Schloss Dyck as the impetus for this book but doesn’t say why. Mercedes-Benz is a long-time sponsor and that year celebrated 120 years in motorsports in general and the race history of the S Class in particular. One of the five original vehicles they brought was the 300 SLS racing version of the Gullwing. (Another notable 300 was the 6.8L SEL that put AMG on the map, the infamous Red Pig.) 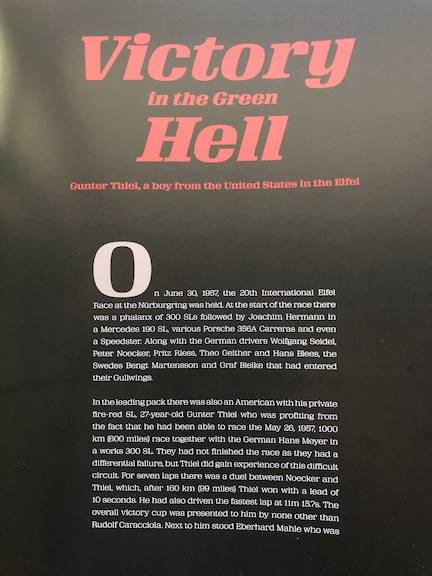 No fun reading small serif text in grey on black!

As common in European books there is no Index. Given the variety of material in this book it would have been most welcome because there is so much worth looking up/for. Speaking of which, the book does have footnotes; they are bundled at the back of the book but without page references and the callouts on the pages themselves are so tiny that you’ll go cross-eyed searching for them. There is, however, a quite thorough Bibliography; it even includes technical literature/manuals.

If you’ve read every book on the planet on this model you’ll probably not find anything earth shatteringly new here (though there are some bits only someone like Kleissl who knows the cars from the restorer’s perspective could know) but you’ll also appreciate that this book is entirely unlike any of the others. The book the world really needs is one about HK Engineering!

Mercedes 300 SL, Car of the Century

by Hans Kleissl and Harry Niemann