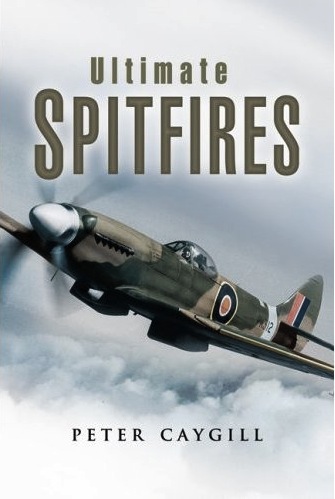 This book is a useful addition to the Spitfire literature because it focuses on twelve special-purpose modifications that very quite different from the early Supermarine versions.

Seafire. Spiteful. Seafang. If these words are missing from your Spitfire vocabulary, and all you know is that it had a Rolls-Royce Merlin engine and “won” the Battle of Britain, you may want to cast your eye on this book. It traces the story of the rather more exotic Griffon powerplant, a direct descendant of the famous Rolls-Royce “R” engine of Schneider Trophy and world speed record fame. In its most mature iteration it matched, and exceeded, the performance of the early jet fighters! These Spits were in operational service until 1954 and Griffon-powered Shackleton radar picket aircraft were in RAF service until the 1980s; even today they are a staple (in Mustangs) at the Reno air races.

The Griffon engine enabled the Spitfire to remain in production as a high performance front line fighter all the way through WWII, the only Allied fighter to claim this distinction. In the difficult post war period in the Middle East, RAF Spitfire squadrons made their contribution of attempting to keep the peace by opposing the Spitfires of the Egyptian Air Force. After the Israeli declaration of Independence in 1948, IAF Spitfires gave a good account of themselves, including the unfortunate shooting down of 4 RAF Spitfires based in the Egyptian Canal Zone. RAF Spitfires also played a major role in helping to suppress the Communist uprising in Malaya that started in May 1948. By this time versions of the Spitfire, renamed Spiteful and Seafang were matching the performance of the early jet fighters. The Spiteful achieving 494 mph at 28,000 feet, a record for a British piston-engined aircraft.

The book covers the development, flight testing, and operational roles of all 12 models in a very fluid, readable narrative. The many descriptions of flight behavior will give especially the non-specialist reader a really good sense of how the aircraft handled and why. There is just enough technical data to illustrate the author’s points, but not so much that it would leave the generalist bleary eyed. What few tables and charts there are have been relegated to one of the appendices which also cover Griffon-powered Spitfire aces, V1 rocket destruction aces, Griffon-powered Spitfire losses and where surviving planes can be found. For the armchair pilot, there are four illustrations of cockpit layouts. (Index)

The publication of this book sadly coincided with the death of a pre-eminent Rolls-Royce aero engine innovator and engineer, “Geoff” Wilde. The great success of the Merlin and Griffon development during the 1930s and ‘40s is directly related to his work on supercharging. Wilde also played a major role in the development of Sir Frank Whittle’s centrifugal gas turbine which was to play a critical role in the future of  Rolls-Royce’s success as a world supplier of jet engines. Geoffrey Wilde is also the father of the unique Rolls-Royce three-shaft engine concept which has set new standards of engine reliability.