An important biography from the early history of Rolls-Royce of an inventor, visionary, and an automobilist of the first hour.

The author worked under, and with, one of the legendary founders of a legendary company, and he worked on any number of high-caliber design and engineering projects.

If the Honourable C.S. Rolls is remembered today by the general public at all, it is for the very thing he did the least—and had the least lasting interest in: automobiles. This book sheds more light on him, but shadows remain.

For dyed-in-the-wool Rolls-Royce folks this little booklet offers a welcome, and first and only look at the archaeology of a long-lost Rolls-Royce building that had been demolished in 1965.

This Workshop Guide intends to help the average owner gain a deeper understanding of their car and properly maintain it. It is also a social history of the car’s and its owners’ lives. 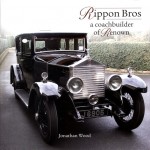 Renowned for the quality of its coachwork and closely allied with Rolls-Royce for most of its corporate life, Rippon lasted a hundred years and bodied a number of fine British and Continental chassis.

A tiny book about a big subject. Easy to slip into the coat pocket on the way to the next concours but good for not much else.

From making saddles to bodying Rolls-Royces, Windovers has a 350-year-long history of coachbuilding. A descendant of the family tells their story.

More than just the history of one particular car, this book also looks at the bigger picture of who the parts suppliers were and how Rolls-Royce built a car in general.

When this book first appeared in 1995 it quickly established itself as the primary source on all the Crewe cars from 1946 onwards. This 3rd edition adds 120 pages and takes us to 1998.

All of these models were market successes for Rolls-Royce in the years between WWI and II. Launched in 1922, they at first added to the 40/50 hp (a/k/a Silver Ghost) range they followed, and then gradually outstripped it in sales.