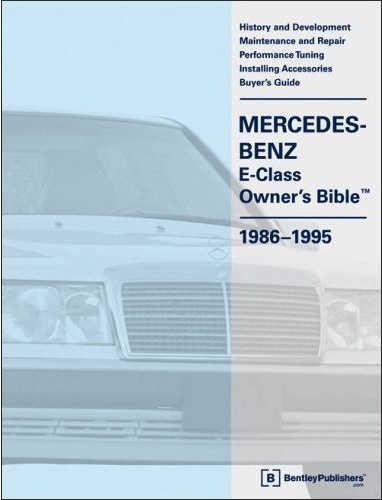 The early 1980s were a tough time for automakers. Pounded by requirements for low emissions and improved fuel economy, engineers sacrificed performance and drivability. It was into this largely dismal automotive landscape that Mercedes-Benz introduced the 300E to the US market in 1986. Powered by a silky-smooth 177 horsepower six-cylinder the W124 four-door sedan was both quick (0 to 60 mph in 7.5 seconds) and fast (135-mph top speed).

The 300E was perhaps the first new automobile design that met the challenges of the modern world head-on, and it was a huge success. It didn’t take Mercedes-Benz long to realize that it had a hit and variations including larger engines and diesels and a coupe, convertible, station wagon and even the 500E factory hot-rod were offered during the car’s ten year production life. In all more than 2 million W124 E-Class vehicles were built.

The E-Class remains very popular today, and many are still owned by their original buyers. But the E-Class is a complicated car with a myriad of high-technology systems and the newest of these highly charismatic cars is getting close to ten years old. That’s why Stu Ritter’s new book Mercedes-Benz E-Class (W124) Owner’s Bible 1986-1995 is so timely. Ritter was the technical editor of The Star magazine and he is a long-time Mercedes-Benz technician and repair shop owner. This is a man whose bread and butter has come largely from keeping 300E’s on the road. No car will last forever, but by religiously following Ritter’s advice and maintenance tips, the 300E has a better chance than most cars do.

The Mercedes-Benz E-Class (W124) Owner’s Bible 1986-1995 covers every facet of 300E ownership. Its 320 pages tells the prospective buyer what to look for in a used 300E and its 350 black and white illustrations help explain how every part of the car works. For the most part this is not a casual read, although the chapters about Mercedes-Benz heritage and the development of the E-Class are quite interesting. But even if you don’t turn the wrenches yourself, Stu Ritter’s explanations will help you understand what the technician is trying to tell you. Think of this book as a cross between a shop manual and a loving tribute to the W124 E-Class and you pretty well understand what Ritter has achieved. Anyone who owns or wishes to own a 300E should make sure that Mercedes-Benz E-Class (W124) Owner’s Bible 1986-1995 has a place on their bookshelf.

Posted Under: Automobiles, German | Author: Kevin Clemens | No comments yet

Time and Two Seats »
« Against Death and Time: One Fatal Season in Racing’s Glory Years