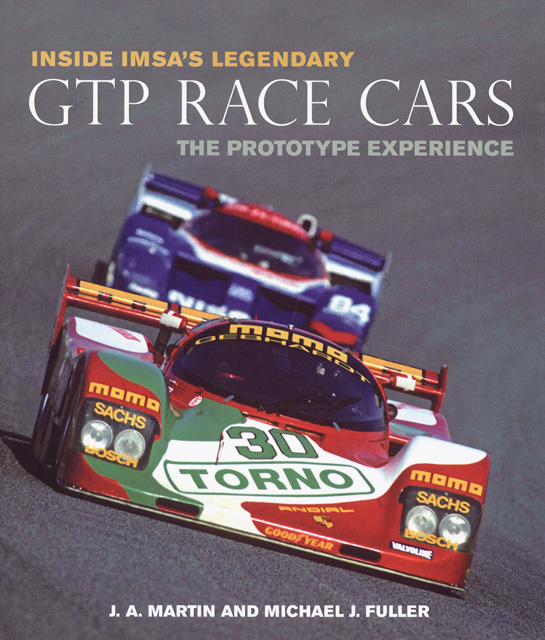 Taking a page out of the anything-goes Can-Am  playbook, the Grand Touring Prototype racing series was inaugurated in 1981 to reinvigorate the International Motor Sports Association which itself had been founded, in 1969, as an answer to another racing series’ shortcomings, namely the SCCA becoming dominated by pro racing. Over the course of a decade IMSA founder John Bishop saw with misgivings that his series too was becoming dominated—by modified versions of road-going sports cars and sedans, stymieing creativity and spectator enjoyment. His answer: less regulation/more originality and low-cost, purpose-built cars without any homologation requirements.

What makes this intelligent, insightful book far more than just another one-dimensional look at a particular racing series or a bunch of specific cars is that the authors tell the story in the larger context of competing ideas about what makes auto racing useful to industry and enjoyable to participants and spectators. Between its ebullient first words, “Protoype sports racers are the supermodels of motorsports. They are sleek, exotic, expensive, rare, and the objects of fantasies. They are masterpieces of kinetic art. And they happen way to seldom” and its sobering last, “Rules don’t limit imagination but instead define direction. But when rules dictate design, there can only be stagnation” lie 13 seasons of hope and hurt, money and ruin, excitement and frustration.

Authors Martin (who already wrote a mega book in 2000, Prototypes: The History of the IMSA GTP Series. David Bull Publishing, ISBN 978-1893618015) and Fuller (wind tunnel modeling, composites) make a good team for covering both the historical and the technical sides. Especially readers for whom the sky fell with the end of the Can-Am era should take an interest in the highly innovative—much more so than their contemporary Group C racers in Europe—IMSA GTP cars. Eighteen cars by fourteen makers are presented in individual chapters describing their technical and design features and on-track performance. Weaknesses and strengths are explained, giving even the lay reader a very good sense for the endless trade-offs involved in achieving a multitude of often conflicting performance parameters. Many quotes from drivers and team personnel liven up the already plenty lively text. There are, obviously, many references to engineering and technical aspects—also aerodynamics—but this should not deter the reader who has more general historic interests. Besides, while specific, the tech-speak is in the form of general concept or principle rather than graphs and formulae. Race results and information about the tracks or the like are outside the book’s purview.

Photos are plentiful and their selection most appropriate, including such interesting bits as styling bucks, clay models, and underbodies in addition to the more obvious detail views of components/assemblies. There are also a few technical drawings and—smallish—cutaways.

The Foreword by contemporary driver and present-day TV commentator David Hobbs is exemplary in its relevance to the subject and its specificity. Unlike some—make that most—of his driver colleagues who are asked to lend their words to give credence to a publishing effort, Hobbs can cite chapter and verse not just of his own adventures but the whole era. The Appendices too are worthy of praise: bibliography (books, magazines, websites), glossary, and specs by car in alpha order (model, designer, chassis, technical). Even the Index is, for once, the proverbial cut above.

Note the signage on the cover car: Momo, about which a stand-alone book has since appeared.