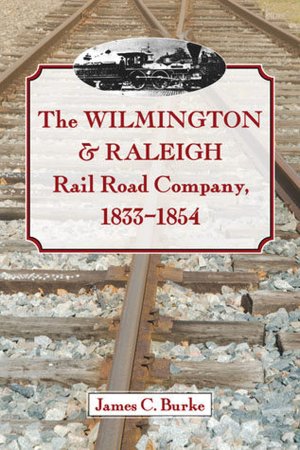 This book is based on a University of North Carolina graduate school thesis that has, over a 10-year period, morphed into a very good history book about the development of what was, at the time, the longest railroad in the world (161 miles). The author has thoroughly researched this topic and presents his data in an engaging way. More history book than “popular” book in its graphic and literary structure, it tells the story of the railroad from the very beginning. The well-footnoted text begins prior to financing being obtained, and continues all the way to the Wilmington & Raleigh’s eventual integration with other railroads in the state. The railroad’s key role from the inception was to provide the early United States with a north-south travel route for mail, passengers and freight. The Wilmington & Raleigh’s role in the economic development of the state is also described, including its impact on land values and how it encouraged the spread of slavery by allowing previously remote North Carolina locations to become economically viable for slave-based commercial operations.

The book consists of six sections describing 1) the initial plan to build the road, 2) the situation in Virginia and North and South Carolina that influenced development, 3) the building of the railroad, 4) descriptions of the rail and steam engine technology employed, 5) a chapter on the financial history of the company, and 6) an analysis of the railroad’s transportation and economic impact on the region’s development from 1840 to 1860. This is a bit of a “two-bookmark” book due to extensive notes at the back of the book that are occasionally worth reading for the interesting details they provide. Let me just say that you would not want Mrs. Kemble, a disgruntled 1838 railroad passenger, to fill out any “how was your stay with us” forms if you are looking for praise.

Maps, maps, my kingdom for a map! Unfortunately, I’m not familiar with the geography and demographics of North Carolina, and although 14 maps are provided to help the reader locate some of what is being discussed, I was lost much of the time. The book would benefit from a large fold-out period-correct state map showing all the pertinent towns, swamps, rivers, stage roads, existing and proposed bridges, proposed rail routes, proposed trunk lines, stage routes, canals, floodplains, basin divides, major ravines, Paleozoic slates, the occasional pyroclastic ejection, coalfields, and sites of domestic iron, turpentine, bacon, corn, cotton, flour and wheat production that are all frequently referred to throughout the text. All these factors play important roles in the “where” and “why” of the railroad’s construction, but the casual reader may be challenged trying to remember how it all dovetails together geographically without a comprehensive map to refer to in times of doubt.

The book contains a tremendous amount of fascinating information. From technology to politics to finance, it’s all there. I personally found the financial structure underlying the railroad’s existence interesting. The governor of the state was also the president of the railroad, and the state financed 40% of the construction cost, using federal surplus money returned to the state by President Jackson. All aboveboard and not considered a conflict of interest at the time. The author also discusses the role that 6% European bonds played in funding the purchase of British iron rails, the cost of which would have otherwise been prohibitively expensive.

Readers hoping to see lots of old photos of railroad engines, rolling stock, or stations will be left wanting. Very little of that is included. Descriptions of the wooden and steel-strap rails, the various types of roadbed used, and the types and weights of all the locomotives, passenger and freight cars employed are given, but not much visually beyond a few old photos. Excellent tables compiled from company records tell us how much railroad employees were paid from engineers all the way down to the dozen presumably unpaid slaves owned by the railroad. The data tells us that, on average, the 12 slaves each cost $1,145. Much of the temporary heavy construction labor was subcontracted from local slave owners as the railroad’s construction passed through the state. The rental cost to the railroad in 1860 was $210 per slave per year. Negro Bonds were issued in the amount of $34,806.48 to cover the expense of 235 slaves hired from their owners. The data in the tables also indicates that white workers tended to quit their construction jobs once they had “made enough money to satisfy their most pressing needs.”

The book consists of Acknowledgments, Table of Contents, Preface, Introduction, 6 Chapters, Appendix A & B, 17 pages of small print dual-column Chapter Notes, 6 pages of dual-column Bibliography, and a small Index. Burke is a North Carolina native, teaches at Cape Fear Community College, and is on the Board of Trustees of the Wilmington Railroad Museum.

The Limit: Life and Death on the 1961 Grand Prix Circuit »
« Chevrolet Volt: Development Story of the Pioneering Electrified Vehicle