Rebel Rebel: Breadvan—The Most Recognizable Ferrari in the World 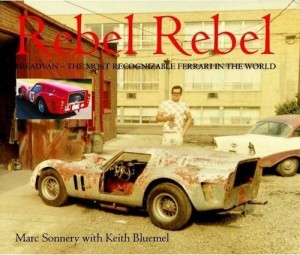 “The Breadvan was as charismatic a Ferrari as there ever was. Perhaps so because it was the only one ever made to fight with Enzo, and as a direct consequence of his wrath.”

The quote above is what will help explain the otherwise cryptic “rebel” reference in the book title. For a car that turned fifty in 2012—especially one as unusual as this one-off—it’s about time that someone finally devoted a book to it!

The French called it la camionette (little truck, van) but considering how reminiscent of an oven door the rectangular rear window is in the extreme Kamm tail, it’s easy to see how the British arrived at the “breadvan” moniker.

Much has, of course, been written about chassis no. 2819GT, but scattered across magazine articles and sidebars in books. Author Sonnery last worked on the subject in 2000 doing research for a story by Alan Boe in the Ferrari magazine Cavallino. That’s what spawned the idea for a dedicated book, but, not being a pressing priority, it took anther 10 years to finally come together. It surely helps the cause that both the author and the publisher harbored an affinity for this car since their teenage days, albeit 16 years apart, one seeing it in the flesh (Parker, 1962) and the other as a toy model (Sonnery, 1978).

Co-author and Ferrari authority Keith Bluemel starts off the coverage with a 7-page narrative chronology of 2819GT in the context of the V12-engined 250GT berlinetta project. The reader entirely new to the subject will find here the immediate backstory to race driver/team owner Count Volpi di Misurata’s role in creating the Breadvan (this being the story of the “palace revolt” at Ferrari during which key people left/were forced out; what is not explained is what led to the revolt in the first place—Enzo’s wife. A juicy story but you have to hit a different book for that!). Volpi, having became a backer of the new firm founded by the dissidents—ATS—used his own 250GT swb, 2819GT, as the basis for a new racecar design, the Breadvan. Readers who already know the story a little bit will probably have to unlearn a few things. Bluemel corrects and clarifies certain details, such as Giotto Bizzarrini having no direct hands-on involvement with the project but instead providing guidance to carrozzeria Neri & Bonacini—not Piero Drogo’s although some of his people moonlighted on the build (the two shops were very near each other, and also near Volpi). Bluemel also compiled tables of race results, ownership chain, and toy models.

The bulk of the book consists of Sonnery’s 24 interviews (of 22 people) of “almost everyone involved.” These take the form of unedited/unmodified questions and answers, all the way back to Volpi himself. (The one exception to this is the reproduction of an excerpt from the autobiography of German owner Gunter Sachs von Opel; his name, incidentally misspelled throughout.) While this preserves the interviewees’ original voices, it also presents a bit of a conundrum in that their memories and interpretations are on occasion at odds with each other. It is left to the reader to [a] spot them in the first place and then [b] decide whom or what to believe! For a book that is likely to remain the only one on this car, and with a large number of the protagonists still alive at the time of its writing, one should think that now would have been the time to set the record straight once and for all. Or, at the least, offer editorial commentary regarding discrepancies. The reader will also find it unsatisfactory that certain useful detail is either omitted or “assumed.” What good, for instance, is it to come across an interview with one Alwin Hietbrink without being told that he is the Dutch coachbuilder who in 2007 restored 2819GT to its 1962 Le Mans appearance?

The focus of the story is on the ownership and competition history of the car. There is no significant technical/construction detail and only peripheral reference to general 250GT matters. Fortunately, Anthony Pritchard has since released his 352-page opus Ferrari 250 GTO: The History of a Legend (He, incidentally, attributes the “concept” and the body-building to Drogo, with N & B “rebuilding” it. And he says all Drogo swb 250s are called breadvans.) Sonnery includes a chapter of driving impressions from the stint he did at the wheel of the Breadvan at the 2008 Le Mans Classic.

Photographically the book is very strong, offering many period photos of which many are new to the record. They are accompanied by a few pieces of correspondence and registration slips etc.

The book, in landscape format, is cleverly designed, nicely typeset, and well produced. It is worth noting that this is one of several titles publisher Tim Parker’s eponymous new company has produced. After four decades in publishing (from newspapers, to Haynes, to Osprey and then Motorbooks) Parker now has the luxury of being able to devote himself to only those projects he wants to publish and one has high hopes for many such. Index.

England’s Historic Churches by Train »
« A Life in a Year: The American Infantryman in Vietnam, 1965–1972