Unseen Images of a Lost Era of Formula One 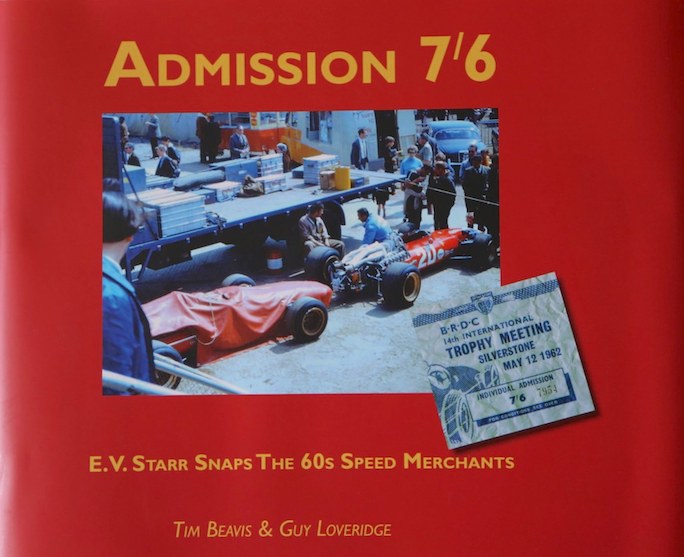 Just one look at the cover of this book, that’s all it took. I was hooked before page one, beguiled by the paddock shot of a 1966 Ferrari 312, with what looks like a Jaguar Mk X in the background. If you are old enough to remember when aerodynamics were an inconsequential footnote in the book of Grand Prix racing, then you need to buy this book to remind yourself when brute  power, not downforce, stole the headlines.

A former aeronautical engineer, Edgar Vernon Starr was one of us, the guy with neither press pass nor privilege, armed with only a keen eye and a camera. This book is a collection of pictures taken by Starr between 1961 and 1969 of British and European Formulae One and Two race meetings, at circuits including Brands Hatch, Silverstone, and Spa. Starr died in 2000, and the pictures would have remained unseen had it not been for Tim Beavis, who acquired two boxes of Starr’s slides at an auction in Dorset. With co-author Guy Loveridge, a selection of Starr’s pictures are now reproduced in this charming book, which hopefully will be supplemented by further volumes covering the  Seventies and Eighties. 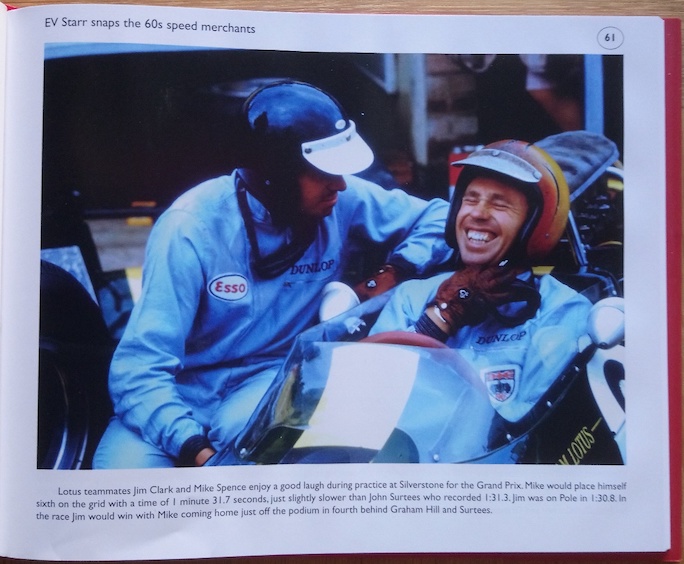 The “7/6” in the title refers to seven Shillings and Sixpence, the price of a ticket to the BRDC International Trophy at Silverstone in May 1962. Even adjusted for inflation, admission was astonishingly cheap, with £7 now representing just 5% of the price to watch this year’s British Grand Prix. Better still, in 1962 it wasn’t unusual to literally rub shoulders with a Grand Prix driver in the endearingly chaotic paddocks of the era. Nowadays, hoi polloi (such as your reviewer) can’t even get into  the same zip code as the paddock, that privilege being  reserved for the affluent clientele of the Paddock Club (TM, of course). But, the past being a foreign country and all that, Edgar Starr was able to do things differently by going exactly where he damn well wanted, and to take a picture of every prospect that pleased him. The 128 pages of the book are primarily a pictorial record, but are supplemented by some personal recollections from various contemporary figures including John Surtees, Christianne Ireland (daughter of Innes), and the near forgotten Welsh driver Jack Lewis. While Surtees’ inclusion adds gravitas to the book, his recollections tend to focus on the already well plowed furrow of his break-up with Ferrari, and I will confess to having enjoyed Jack Lewis and Jackie Oliver’s reminiscences rather more than the Surtees axe-grinding. 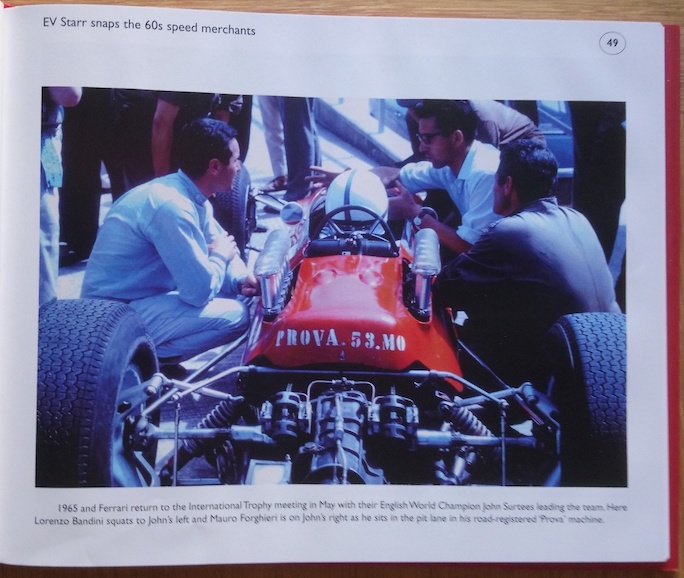 But it is the pictures themselves that enthral and resonate, showing a lost era when drivers, mechanics, team bosses, and spectators mingled in the melee of the paddock or pit lane, the era when every syllable of a driver’s speech wasn’t curated into sponsor-friendly pap by corporate PR. The book’s emphasis is on driver portraits, and there is a lot to savor, from the impossibly youthful Jackie Ickx at Silverstone in 1969 to the 1965 model year Jackie Stewart, sporting a look far removed from the hip persona he was to adopt a few years later. No trendy shades or Dylan corduroy cap, and short cropped hair that would have passed muster in the army. Other images are haunting, none more so than the picture of a laughing Jim Clark and Mike Spence, apparently  without a care in the world in 1965, three years before motorsport’s cruellest spring took both their lives. As in the case of Rainer Schlegelmilch’s definitive Sportscar Racing 1962–1973, the peripheral detail provides unwitting testimony to a long ago era. Such as the shot of Denny Hulme leading Graham Hill through Oulton Park’s Knickerbrook corner in 1966. The Brabham and BRM both epitomize the clean lines of F1 cars before wings and sponsorship, but what really jumps off the page is the sight of mature trees, growing in untended scrub just feet away from the tarmac. I loved the endearing period naïveté of the advertising hoardings at Spa in 1961, especially the pastel blue Mobil sign, complete with a modestly sized red Pegasus and the Mercedes Benz sign boasting “À votre service, toujours et partout!” 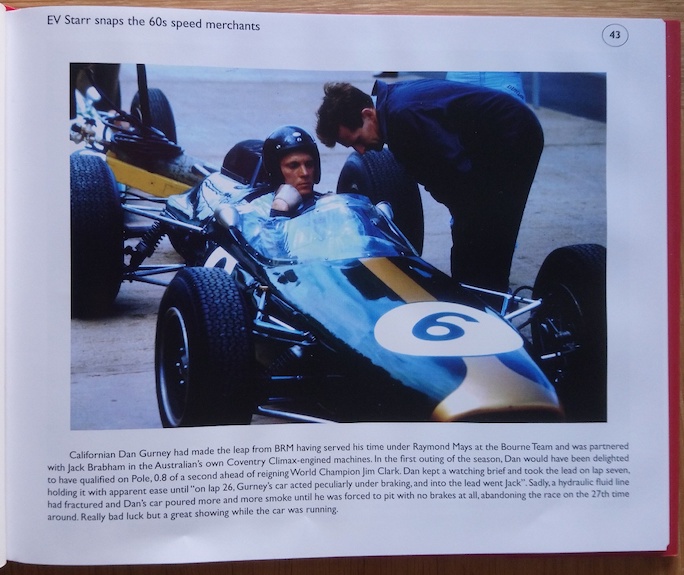 I can understand the decision to include so many “car and driver” and pit lane shots but I hope that future editions will feature more of the background imagery. I’d find the contents of a 1960s era circuit car park, even the concession stands, almost as fascinating as the race cars themselves. But not quite, because the era covered by this book saw almost unprecedented change in Formula One. 1961 saw a Grand Prix field of skinny-tired 1.5L jewels, exquisite in their execution and perfectly proportioned but lacking the potency of the fat-tired 3L machinery that superseded them in 1966. I cannot be alone in thinking that Formula One design reached its apogee in the early years of the 3L formula, and I cite the pictures of the Ferrari 312, Lotus 49 and P83 BRM H-16 as conclusive evidence. You can’t even see the so-called power unit of a 2021 F1 car but, even if you could, such is the complexity of the V6 hybrid that I bet you couldn’t work out precisely which bit did what. Compare and contrast the simplicity of their ancestors, and take your time to enjoy the almost gratuitous sexiness of the vipers’ pit of exhausts snaking from the rear of Amon’s Ferrari. 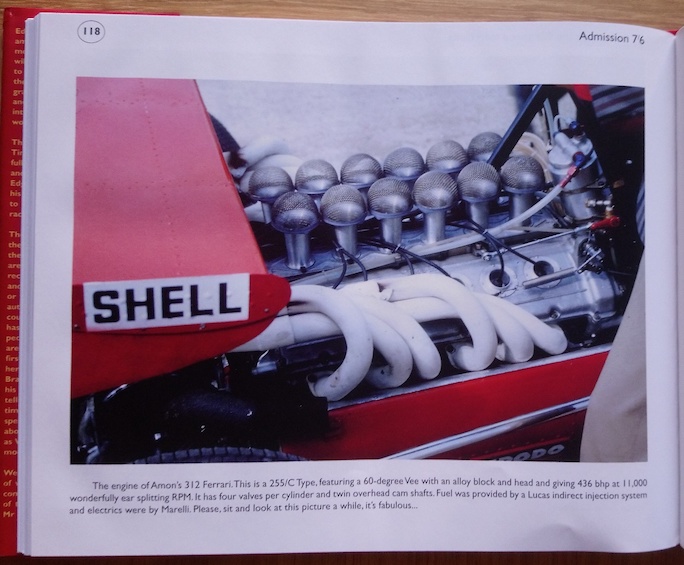 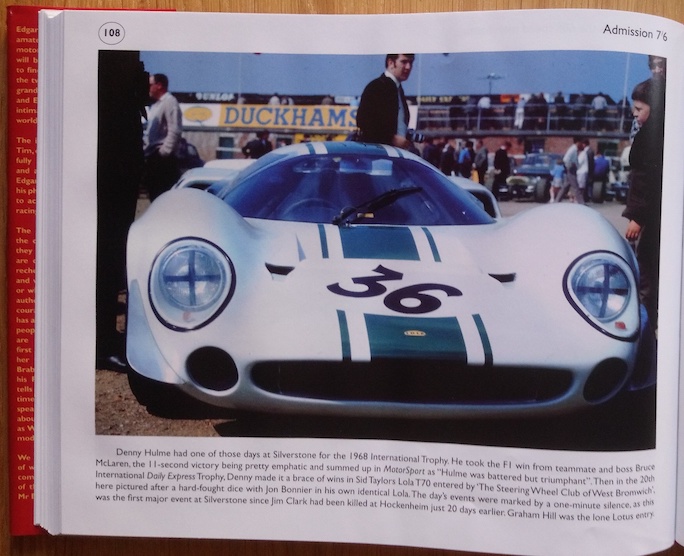 The book isn’t quite perfect, and I would prefer to have seen more pictures of race cars and fewer of the drivers, and future editions will need more careful subediting. Readers of this genre of motorsport literature tend to be as pedantic as your reviewer and spelling errors (such as “Carol” Shelby and Keith “Green”) do jar a little. Some might also find that the picture captions veer close to whimsy. These minor cavils apart, I recommend this book—it is a delight, and I look forward to seeing much more from E.V. Starr’s wonderful legacy.

Only 400 copies were printed.

Unseen Images of a Lost Era of Formula One