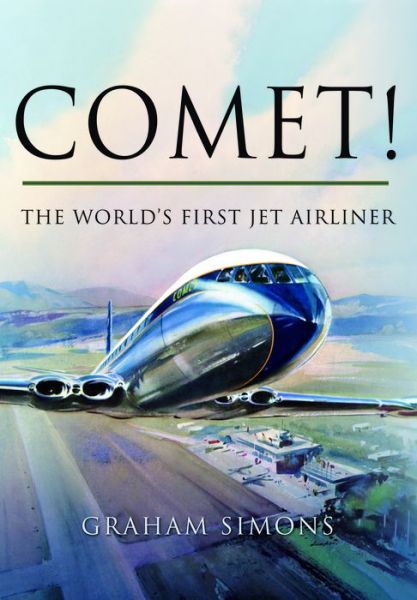 “The Comet was the focus of the hopes of many in the aviation industry—it had been delivered on time and lived up to its specification. Then a series of disasters that rivaled the loss of the RMS Titanic struck the design—disasters that had worldwide implications.”

Those accidents, poorly understood at the time due to the new processes and materials used on the aircraft and also its novel flight behavior, puzzled industry types and scared the flying public. Consider the time: the first prototype flew in 1949—when the drone of piston engines was the only sound people were used to—and took up airline service in 1952. Transcontinental air travel was still a novelty and jets, well, there weren’t any before the de Havilland DH 106 Comet. 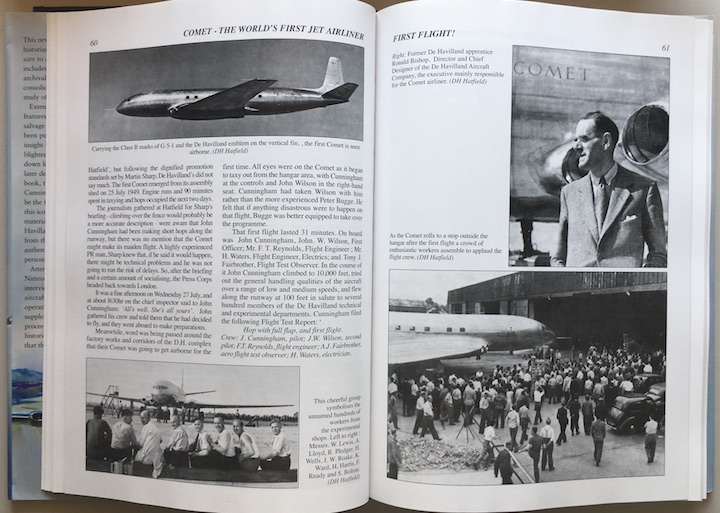 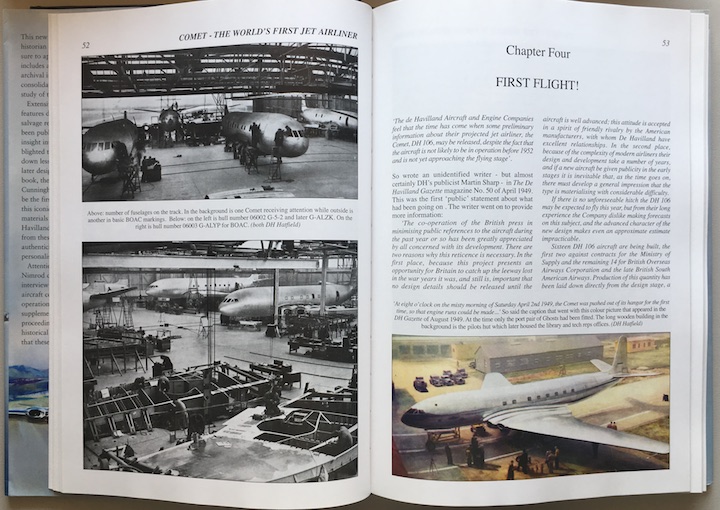 That three of them broke up mid-flight within a year and the fleet was grounded didn’t help the Comet but its plight helped other manufacturers improve their designs. So important are the accidents to the story that the author devotes almost a fifth of the book to them. Although Comet sales never fully recovered, subsequent versions remained in airline service for over 30 years and its highly modified military offshoot (the Nimrod maritime patrol aircraft by Hawker Siddeley) saw RAF service for another 30 years until 2011. 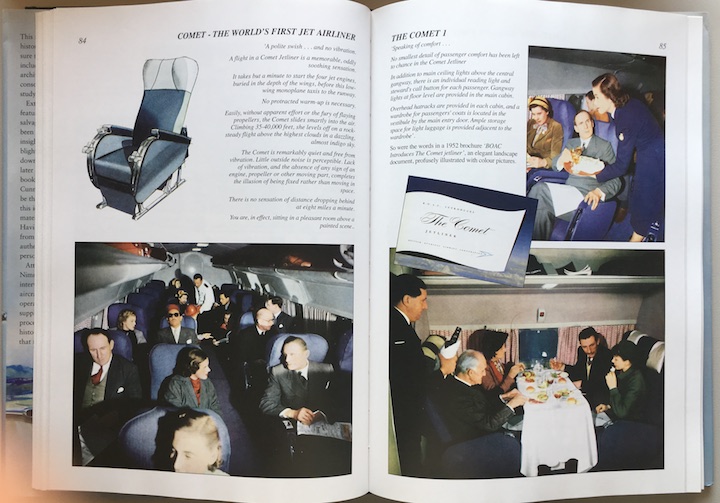 So, lots to tell about this important and supremely beautiful aircraft that shared a name with another machine by the same manufacturer, the de Havilland DH.88 that gained fame in the 1934 MacRobertson Air Race, set many aviation records, and became a 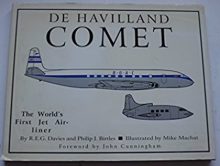 pioneering mail plane. (Speaking of sharing names, note that there is another book with the same title and subject as this one, left, by R.E.G. Davies from 1999, ISBN 978-1888962147. At a mere 63 pages it comes nowhere near this new one but is nicely illustrated and is still easily found and at decent prices.)

First published in 2013, the Simons book was reprinted in 2017 in completely identical form—even the price has remained the same—except that the new one is no longer printed in India but China. The quality of the photo reproduction is pretty much identical although the color saturation in the first edition is just a hair sharper. 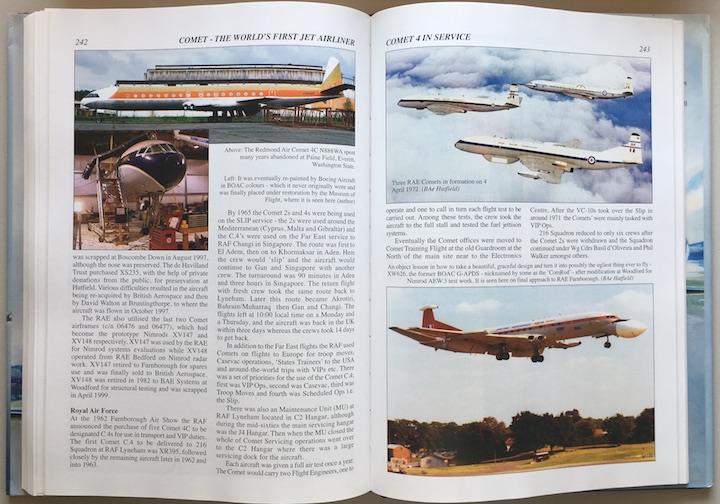 The previous go-to book in Comet matters was Kev Darling’s 2005 tome De Havilland Comet (ISBN 978-1861267337). It remains a solid book but Simons goes deeper, especially in terms of archival imagery that may well be new to the published record and also his extensive use of often lengthy citations from primary sources at de Havilland. On the downside, the book is physically smaller, all but a few illustrations are b/w—and the sloppy proofreading makes one despair.

The wide scope of the book is such that not only Comet enthusiasts will find it a useful resource. From development to mustering-out, every phase is covered in satisfying detail including the Nimrod. While the prose is mostly fluid there is often (especially in the discussion of the accidents) a level of jargon that may well frustrate the non-specialist lacking an understanding of aero engineering or even just the lingo. This is of course not really avoidable in this sort of book but a Glossary or list of abbreviations would help newbies!

The historical context is quite well developed; especially the noteworthy aspect that Britain started thinking about post-WWII civil aviation as far back as 1943 while it was still fully embroiled in a war whose outcome was anything but predictable. It is vastly interesting to read how planners set about devising requirements to meet performance parameters that were then still untested theory. People with interest in procurement and business will appreciate how important it was to have Britain’s national airline commit to being launch customer and ordering 16 aircraft—at a cool £450,000 apiece—while it still only existed on paper. In that regard, the Comet is an unusual example of being the right answer to the right question, making it all the sadder that it failed anyway. 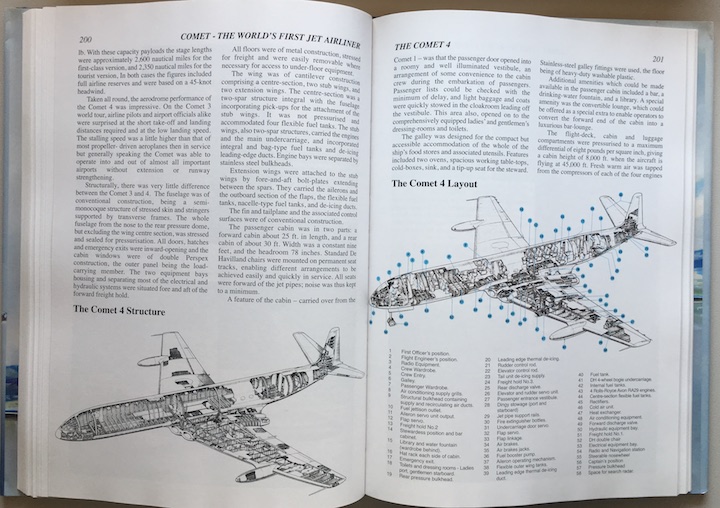 There are quite a number of technical drawings, exploded views, and cockpit/workstation layouts. All illustrations are thoroughly captioned, the Bibliography goes up 2009, and the Index is basically fine although the typos here are not doing the author/publisher any favors. 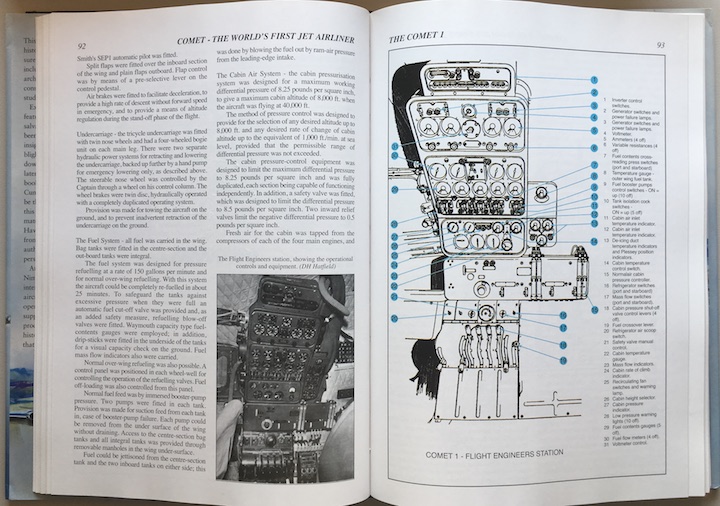 Simons, a professional aviation writer, publisher and historian, has done a number of aviation books, many of them for the same publisher. Noteworthy in the Comet context is his 2017 book De Havilland Enterprises: A History (ISBN 9781473861381).

What makes the timing of the 2017 reprint a bit surprising is that the publisher released another Comet book a few months later, De Havilland Comet, The World’s First Commercial Jetliner (ISBN 9781526719614) by Colin Higgs. Part of their “World’s Greatest Airliner” series of paperbacks it’s just about half the length but is distinguished by containing 24 superb artworks by world-renowned aviation illustrator Juanita Franzi.