Mad for Speed,  The Racing Life of Joan Newton Cuneo 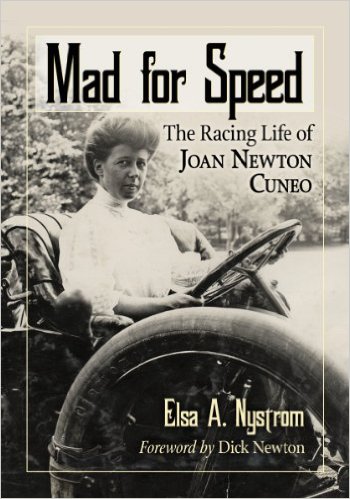 “At the end of the major portion of my research I found that besides being the woman who was said to have single-handedly gotten women banned from racing, which is not true, Joan Newton Cuneo was a cultured but feisty lady who reigned as a national celebrity for a decade.”

Anyone who could say in 1914 that they had already owned eighteen automobiles would have been a curiousity. A racing driver? Even curiouser. A woman owner/driver/mechanic? The first and only female participant on the first Glidden tour? With a part-time riding mechanic who had stood trial for murder? Get outta here.

It helps that she came from wealth and married into greater wealth, that as the youngest of four daughters she was her doting father’s “favorite son,” that in school she had a mind for science and math, and that she was both tomboy and ladylike. Having a very famous name on the family tree, a few generations earlier, could only be a boon: Isaac Newton the mathematician.

And still she died in obscurity, her pioneering “motor girl” accomplishments—not least a women’s speed record of 112 mph on the Long Island Motor Parkway—forgotten already during her lifetime. And if she is remembered at all nowadays it is for something she didn’t do, at least not actively and specifically: get women banned from organized racing in the US. That was instead overreach by the sanctioning bodies, few as they were then, that already didn’t see eye to eye and didn’t know what to do with Cuneo (1876–1934) and the example she was setting.

This colorful story is threaded here together by a professor of history who is used to the rigors of academic research, not afraid to tackle a quarter century of newspaper clippings, and discern the essence of the “elusive Mrs. Cuneo.” Assorted relatives and offspring made themselves available, not least a cousin, Dick Newton. A racer (mid-1960s), designer and builder himself, he had always had an affinity for the relative that family lore seemed to have branded the black sheep and had it in mind to write a book about her himself. Learning of Nystrom’s efforts he instead made his material available to her, took on specific research tasks, and wrote the Foreword to this book.

The book is as much social and cultural history as biography, for Nystrom is very much a context-oriented chronicler. Cuneo’s wedding gown is described with as much detail as the socio-economic conditions of her hometown or her millionaire banker-husband’s willingness to not only indulge his wife but accompany her on many tours/rallies as a keen passenger. Many questions remain about their relationship which ended in divorce—was the marriage arranged? did he have mob connections? The book, in other words, should appeal to pretty much anyone who doesn’t live in a barrel in the forest, who takes in an interest in their fellow wo/man, and, obviously, to anyone with an interest in the early days of the automobile in general and US motorsports in particular.

Typical for a McFarland book it is sparsely illustrated. The text draws on many excerpts and quotes (chapter notes are at the back of the book), and there is a fine Index. Also typical of McFarland, this publisher deserves praise for championing such niche projects—and the reader is reminded that unless someone buys worthy books like this, they may not get published.

Mad for Speed, The Racing Life of Joan Newton Cuneo