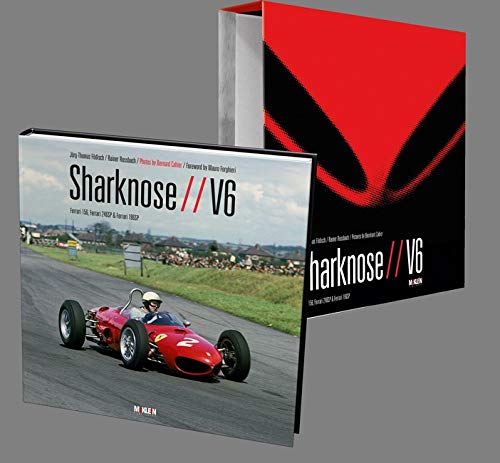 “More than any other race car, the ‘Sharknose’ Dino represents a fundamental shift in Ferrari’s technical culture. In the late 1950s, Carlo Chiti had struggled to convince the Commendatore that this change was necessary—that the future of the motor racing sport, as demonstrated by the British, lay in the mid-engine concept. Enzo Ferrari, who is alleged to have said ‘I build engines, and attach wheels to them,’ was certain that the engine is everything. Handling, weight, distribution . . . all of that was incidental, as long as the cars had superior power.”

(English / German) You can go to pretty much any page in this excellent book and pluck from it a paragraph to analyze. Whether it be raw facts that constitute the proverbial dots in the universe of the knowable or the interpretation of facts (the connecting of the dots), this book offers both, in spades and in such fully fleshed-out prose that you’ll not want to put the book down. If you read German, all the better. The English translation is truly, truly good but German simply has a grammatical structure that is able to yield more nuance. An example (p. 24), related to the quote above: “Brushed aside by the newly awakened British teams, Ferrari had set its sights too high.” In the original German: “Die aufgewachten Briten hatten die Trauben für Ferrari zu hoch gehängt.” The outcome is the same in both versions but in German it is the Brits that have the active voice—it is they who do the raising of the bar—whereas in English it is the Italians, setting their sights too high. The same but not the same, eh? If a book review begins with this level of micro detail, you can deduce that on the macro level everything must be so well in order that there is nothing to report. True that. 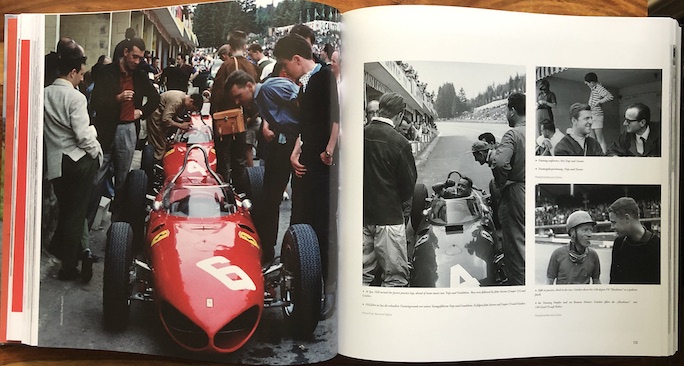 The authors already have several impressive books to their names and this one only adds to their reputation for sterling research, attention to detail, and the wherewithal to source many previously unpublished images. The book proper is literally their most weighty offering to date, ringing in at a cool 8 pounds. 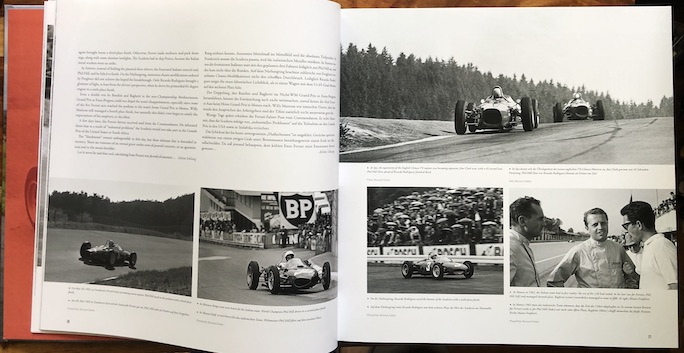 Attention to detail: every person and car in photos is clearly identified.

The Sharknose is such an iconic car that there is no merit in delineating its bona fides here. If you do not yet know its place in history, tsk tsk. If nothing else, make a mental note that it is achingly beautiful and try to see (and hear!) one in the flesh. Moreover, the period in which this model was active was on many fronts one of quite singular distinction and very much solidified and advanced the standing of Scuderia Ferrari. Americans are of course drawn to the era because of US driver Phil Hill winning the Formula 1 Championship in 1961, the year that is also marked by the death of Wolfgang von Trips (along with fifteen spectators) at the Monza GP. Ferrari was on a roll, with seven GP wins that year, and then . . . 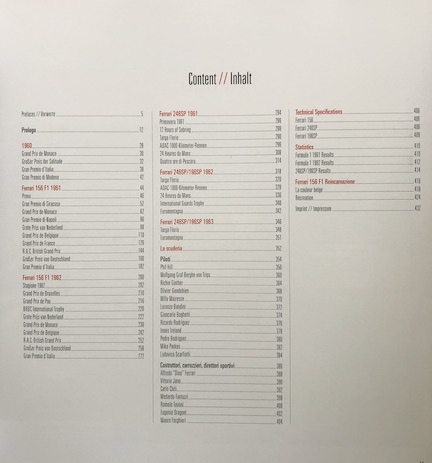 That’s where this book picks up, following the 156 and its 246SP and 196SP offspring to the 1963 season. Actually, it begins with four important races of the 1960 season, following a quite brief mis en scene that turns the spotlight on the 1958/59 changes in the racing regs that would bring about the Sharknose. One thing the book only dwells on all too little is the upheaval within Ferrari—described here merely as “a massive argument”—that lead, in 1962, to the defection/dismissal of several key people without whom the Sharknose project would not have been what it is, in particular team boss Tavoni and engineer Chiti who would go on to found ATS and compete against their erstwhile employer. 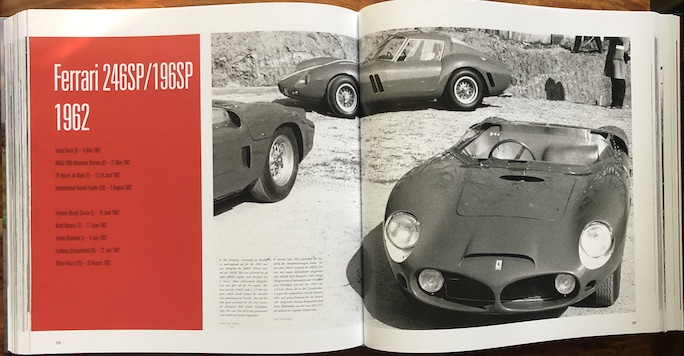 Almost a hundred pages are devoted to ancillary material such as mini bios of drivers (12) and tech/design people (7) as well as specs for all three models, race results, and a closing chapter by Dutch amateur racer Jan Biekens, the man every 156 fan wants to stand a drink—because he so badly wanted to own, and race, a Sharknose that he had a replica built, at monumental cost. (Where is the book about that??)

As it is this is a massive book, a useful thing to keep in mind when complaining about the too-too small type—call it 9 points, and the photo captions are not only smaller still but printed in a shade of grey. The horror. You will spend hours and hours and hours with this book so not having your eyes sting would help. 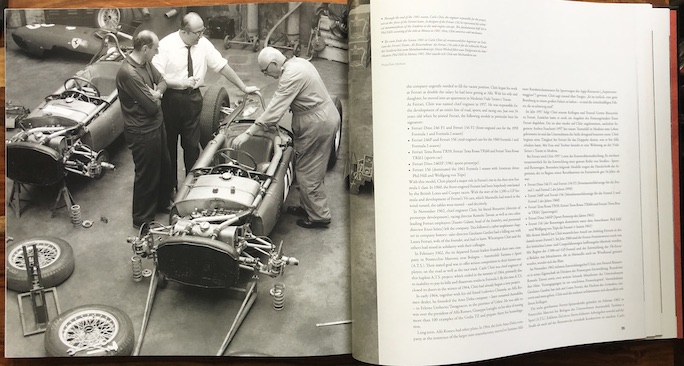 One of the Prefaces is by someone who needs no introduction in racing/sportscar/Ferrari circles, Mauro Forghieri, but the second one surely should not have assumed that an international audience would know that the writer, Helmut Zwickl, is an Austrian journalist and occasional racer. He’s written several motorsports books, only a few translated into English. 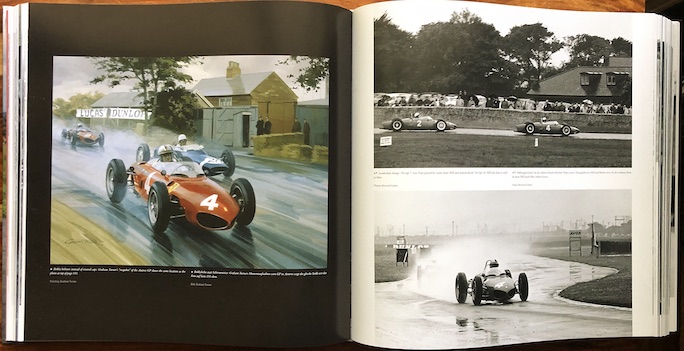 Several reproductions of fine art by Graham Turner round out the picture. 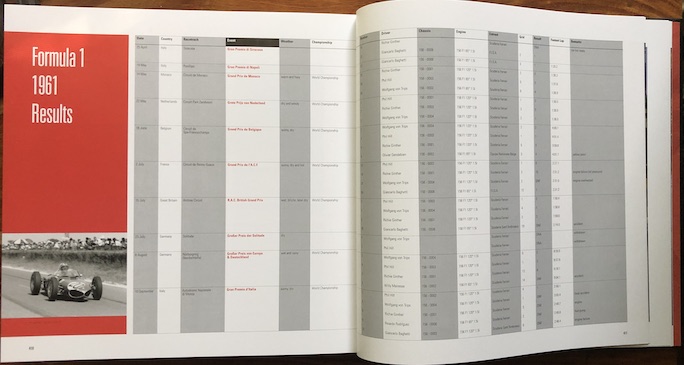