Many of the aircraft in this book may not be terribly well known but without them the planes that we do know would probably have not come about. In other words, trial by error.

This autobiographical memoir by a career RAF pilot who also worked with and then for aero engine maker Rolls-Royce sheds light on man facets of active-duty flying, engineering/admin, and procurement.

A high-level survey of all Marks of the famous British WW II fighter that was the RAF’s first-ever monoplane. Specifically aimed at scale modelers and anyone who wants a quick but solid synopsis.

The P-51D was the definitive version of the Mustang P-51D and the primary USAAF fighter in Europe. Tons of kit models exist and if you want to customize them, this is your book.

Turn off reality TV and go find your own car! They’re out there, and Ryan “The Automotive Archaeologist” Brutt will show you what he—and you—can find.

Is an interest in buses a “purely British phenomenon”? The author doesn’t think so—and offers piles of photos to show us what we might be missing.

An Inkling of Brewster 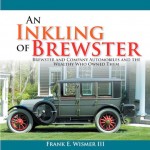 This US coachbuilder bodied the most expensive automobiles of the day and also built its own complete cars so it is no wonder that its clientele is a veritable “Who’s Who” of high society. Based on heretofore private papers the book offers a good overview.

Close-up cockpit photos and detail drawings of the instruments of six German WW II aircraft—plus a full-size (!) drawing of a Bf 109 main panel. Bet you don’t have one of those yet!

Public transport with a French flavor, made by a pioneer automaker that got off the ground thanks to American money. Beaucoup de photos.

Before 9/11 there was 9/9, a day on which an Afghan resistance leader was assassinated. Everyone talks about the one but almost no one about the other, yet the two are inextricably linked.

“The Babe” vs “The Scourge”—sounds like a wrestling match! The French in one corner, the Germans in the other. Both did well. More importantly they wrote a new chapter in aviation history.